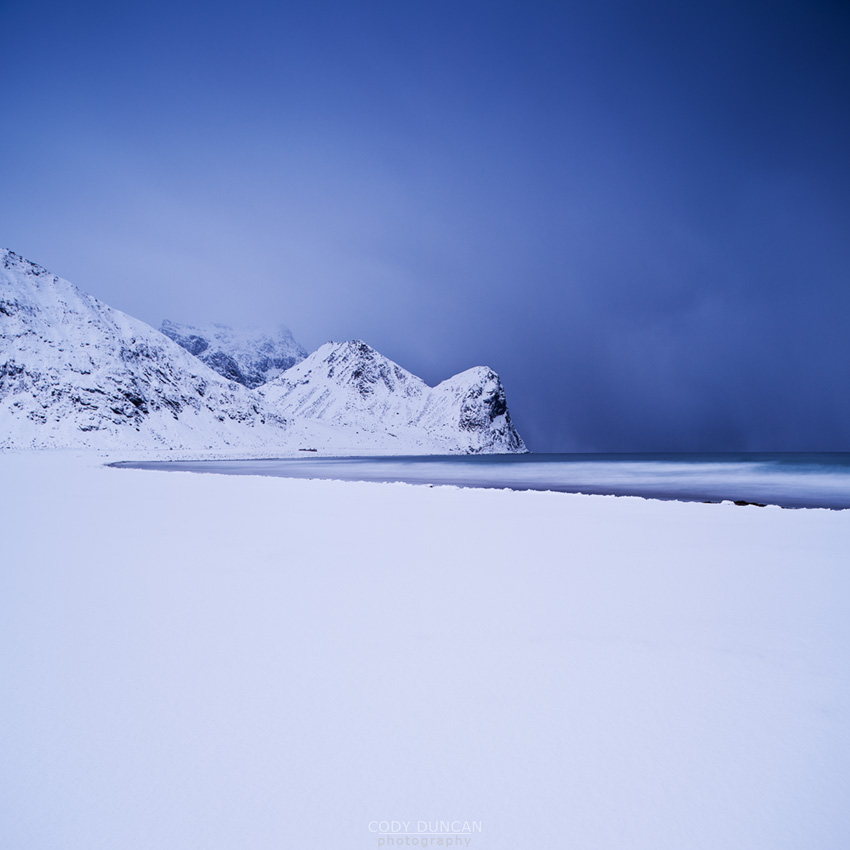 A second composition following on the footsteps of Weekly Photo #1, Winter at Unstad Beach.  You can read more of the overall story of the day HERE.

When shooting in winter, and especially with fresh snow, it’s always important to take a moment to scan the overall scene and possible compositions and then proceed to work your way ‘into’ the scene.  IE, don’t immediately rush to the water’s edge and start shooting, as you’ll now have footprints over what previously would have been an untouched beach.  I often almost walk in a circle on my way to a scene, being careful to avoid spoiling future compositions.  If it’s one thing I’m annoyed by, it is footprints in an otherwise unspoiled landscape (applies to sandy beaches as well).

So, after feeling I had gotten the most of of the rocky areas of the beach (weekly photo #1 HERE), I proceeded to move to the sandy part of the beach.  Here is where good timing and luck also came to my aid: the combination of clearing winter storm with an incoming tide.  The incoming tide part is important.  If the tide had been outgoing, then there would have been a section of the beach already cleared of snow.  It would still look nice, but not as nice as this image, where the tide runs directly to the snow line.  Though maybe this is just a matter of personal opinion on my behalf.

I like the blank, almost abstract nature of the scene.  I have other compositions, including ‘normal’ 2/3 crops, but I think the 1:1 format helps create some tension between foreground and sky.

Technical info:  The 1:1 format is from two images, shifted vertically.  Ie: a top image and bottom image.  I don’t like to crop to 1:1, shooting two images provides a bigger file and more info to work with.  When moving elements are present in a scene, it’s best to try and keep them within a single frame, such as the sea in this image.  Otherwise it can sometimes present difficulties later.  Thus my choice to shift vertically and not horizontally.  [When using a long exposure such as this, it really isn’t too important.  But it’s a good thing to keep in mind for other scenes.]

Also, I again kept my WB on ‘shade’ setting to keep the blue channels from clipping, allowing for a better overall exposure.