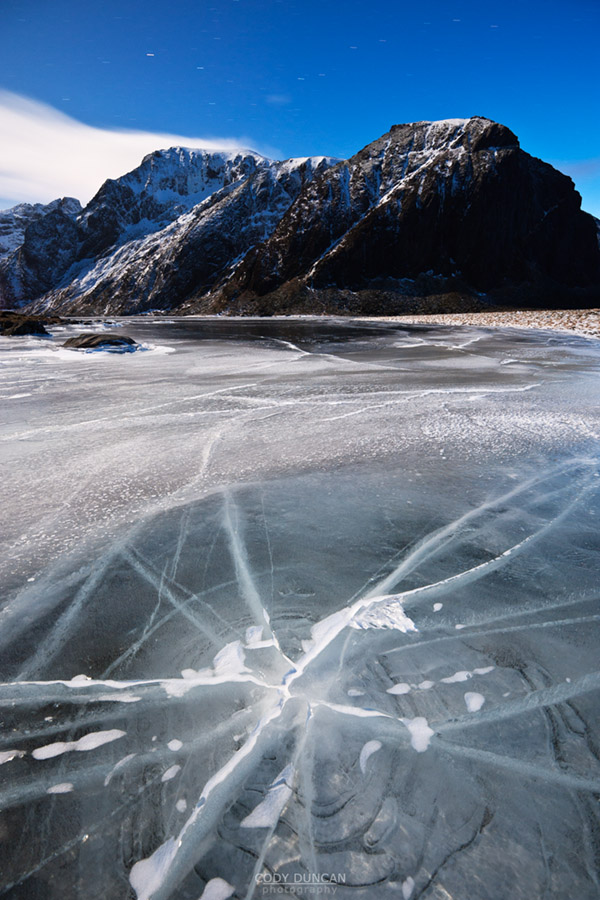 With a near full moon and calm winds, five-o-clock is too early to go to be, even in February on Lofoten.  Parked at Eggum for the night, I wandered off for a bit of exploring.

Growing up in California, I’m not sure I even stood upon a frozen lake until my time in Germany five years ago.  But with the low snow levels upon my arrival at the beginning of February, frozen lakes were about the only thing of interest.  I wandered out into a shallow section of the frozen lake, making sure I could always see the bottom in case I happened to fall though; I figured as long as I could still stand up, it wasn’t too likely that I would die.

Several cracks formed interesting features on the surface of the lake, and so I used these as a foreground subject, lit by moonlight.  It was a bit eerie, to stand there alone in the darkness, the ice creaking and cracking as the temperatures dropped, occasionally echoing a loud ‘boom’ through the mountains.  I did my best to remain still and not fall over, often having to use my extended tripod as a bit of walking stick.  A few days later, while on a different part of the lake, as I was putting my camera away, winds blew my tripod towards the center of the lake.  It was a scary few minutes trying to get it back!