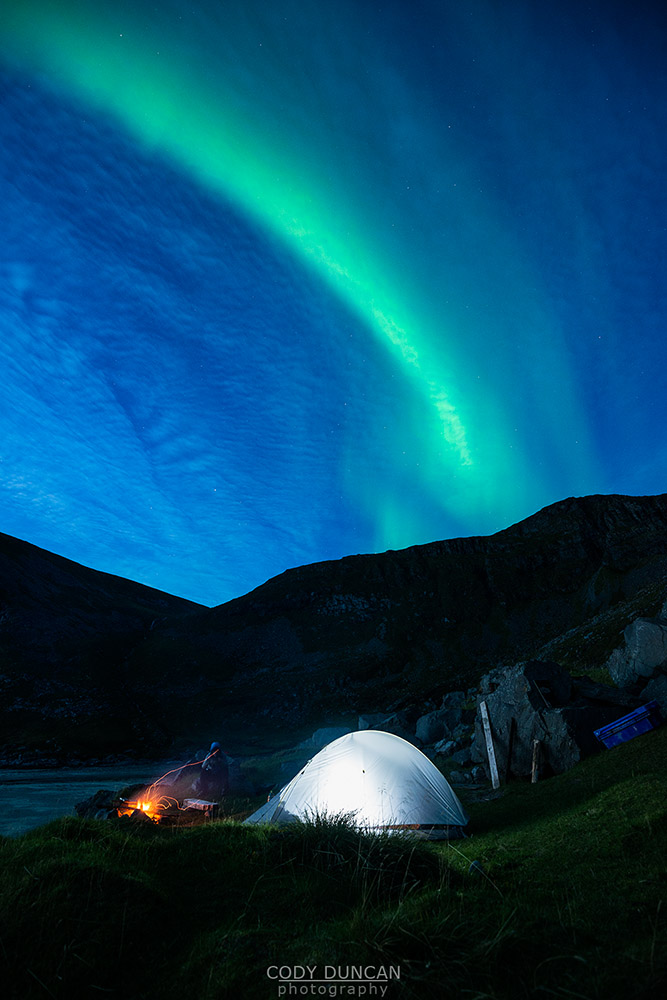 As August (and summer) comes to an end the Arctic sky finally begins to darken enough for the Aurora to return from their summer Holidays.  Well, they’ve been in the sky all along, but it was never dark enough for them to shine.  This year, might first sighting of the Northern Lights was on August 21st, Though they were quite faint against the twilight night.  The night of this image, August 30, the sky was significantly dark and the Aurora strong enough for a decent image to be made.

This is also an image that I nearly missed, as a few hours earlier I had sprained my ankle while coming down from sunset up on Ryten, and was thus is a fair amount of pain and without the ability to move much.  But as soon as I saw the Aurora, I left the warmth of the campfire and did my best to hobble and crawl around the ground to get myself in position.  And with the fairly dark foreground of the campsite, and the Aurora high overhead, I needed to keep my camera quite low to the ground to capture more of the sky.  Thus I would probably would have ended up laying on the ground anyhow, sprained ankle or not.

The Aurora only lasted for a few moments and then disappeared as quickly as it arrived.  But due to the high cliffs surrounding Kvalvika beach, it is probably not the best location for Aurora watching anyhow, most of the lower horizon is hidden from view.  Had I still been up on Ryten, it probably would have turned out to be quite a nice display.