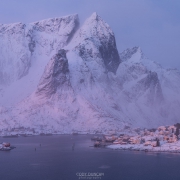 Photo: A small selection of the 30 or so tripods waiting for dawn on Olenilsøy Wednesday morning, Lofoten Islands, Norway. February 20, 2049. 07:54

It is the photography high season here on Lofoten and I must say that I’m both sad and disappointed in what I have seen occurring here over the last weeks. The sheer amount of disrespect, arrogance, and poor behaviour from the visiting photography community is staggering! – both from organised photo tours and small friend groups. People standing in the middle of roads – or worse yet, letting their small children play around unsupervised while heavy trucks full of fish attempt to drive by, parking in marked passing places on single lane roads, parking on the E10 near blind hills or turns, groups of cars parking on, and blocking, private driveways for the closest access to a photo location, and generally high amounts of trespassing on private property- mostly due to some popular Instagram photos. It is out of control in west Lofoten, and it is only a matter of time before a reaction to such behaviour occurs, which will affect all of us who wish to continue to photograph these beautiful islands.

Lofoten is not a photographers playground. And just because you’ve spent a lot of money on camera gear doesn’t mean you can act like an ass! People live here, work here, drive their kids to school, and generally try to go about their daily lives. Years ago, when there were a few photographers visiting in the winter, perhaps it was ok to make a quick stop along the side of the road for a photo or two. But now that there are Hundreds or thousands of photographers here on any given day, we must all be aware of the impact we are making. What once was possible no longer is, unfortunately. That is the problem with too many people, anywhere in the world. Lofoten is being photographed to death. And I don’t want to see that happen to the place I have decided to call home!

But unfortunately I think the concept of ‘respect’ is a losing battle. 99% of people here will just go home after they’ve taken their photos and probably never return, without a care of what impact has been made. I can barely count the number of times in the last weeks I’ve told people not to park in the middle of the road, only to receive the response of, ‘yes, ok, thanks…’ as the person walks away from their car parked in the middle of the road to go take their photos. I’m half tempted to quit photography and start a towing company – I would make a far better living these days…

So I ask, those of you who might read these words. Please be respectful of these islands and the people who live here. The land here is beautiful, yes, but it is a small community on the edge of the world. We are trying to cope with the new visitors, but things take time.