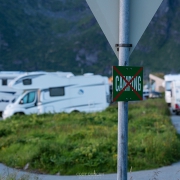 It is July in year XXXX and once again the newspapers of Lofoten and Norway are filled with stories of the tourism overload which occurs each summer as the motorhome armies of the continent head north to fill every single parking space available for the whole of the summer. Somehow they seem shocked each year, but it is nothing new. Though with each year the numbers grow, and yet little is done on the Norwegian side.

And so each summer, there comes a point of frustration among the locals. This year they have added a few new ‘no camping’ signs to some of the popular parking areas and supposedly the parking lot which turns into a de-facto campground in Å will have an 18 hour parking limit (in the fjord region down south they are now limiting the parking to 2 hours in some popular destinations). But as you can see in this photo taken at 01:00, where there were around two dozen motorhomes/campers in the parking lot, just 200 meters from an official (paid) campground, little seems to be done to enforce the few rules. And so the locals continue to grow frustrated.

But such is the cycle of life here in the North, the free playground for Europe. Nothing will change soon, only more restrictions mostly affecting us that live here, not the occasional visitor for a few days each summer. And next July I’ll be writing another similar post…