I’ve probably mentioned it before, but Myrland has become one of my favorite beaches in the last couple years.  Perhaps I’ve just become over saturated by the other beaches (as nice as they are) or perhaps I like it because it is still a relatively seldom visited places and I will likely find the sand free of footprints, even on a sunny evening.

Normally I would have tried to pick a more mountainous location for a sunset such as this, but a few days before, I had sprained my ankle while hiking down from Ryten at Kvalvika beach.  So I wasn’t exactly in any position to be hiking up mountains.  And it was trouble enough just getting down to the beach.  Not to mention that I like to stand a little too close to the water, which on this day, meant I had to painfully hobble out of the way of incoming waves at just the last minute.

Perhaps I would have been a little more tolerant of pain were I not planning to begin a hike into Sweden’s Sarek national park just 10 days after this photo, so my ankle needed all the rest it could get.  Though I ended up dropping my camera in a lake just one day into that hike, so my autumn didn’t exactly go according to plan. 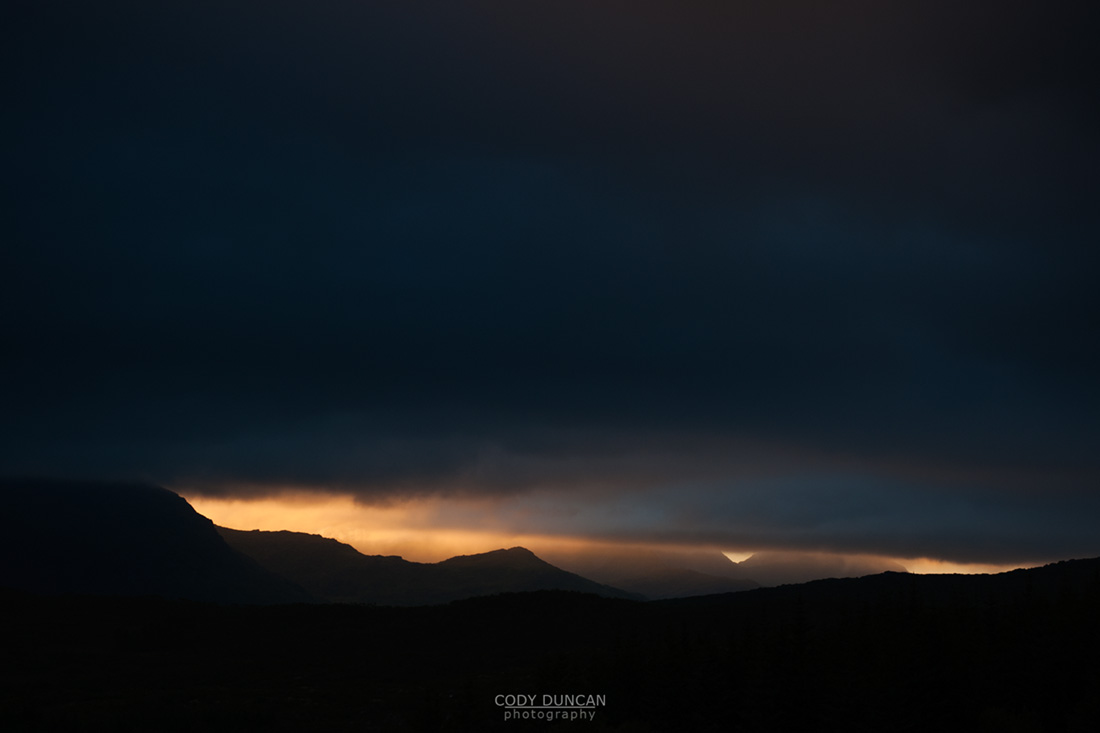 Despite what you might see in the travel guides, summer on Lofoten is not always blue sky at 20+ degree temperatures.  The summer of 2010 was a particularly cold, stormy one, with only a few days of calm weather.  Weather that I took full advantage of.

These years were still in my ‘backpacking’ days, where I traveled predominately by hitch hiking or bus.  But my friend Søren and I did manage to pay out enough money for a two day car rental at one point during the trip.

The day had been spend exploring the north side of the islands, where the weather had been a bit better, before finally returning to Stamsund.  But as evening progressed, we could see that the light might do something interesting and so we hopped back in the car and headed towards Utakleiv.

Up on Hagskaret, the high pass between Stamsund and Leknes, I saw this light.  I knew we were probably a bit too late to reach any of the beaches so I pulled over and took this photo.  Just a beam of light shining below the heaving clouds.  It rained for the next days. 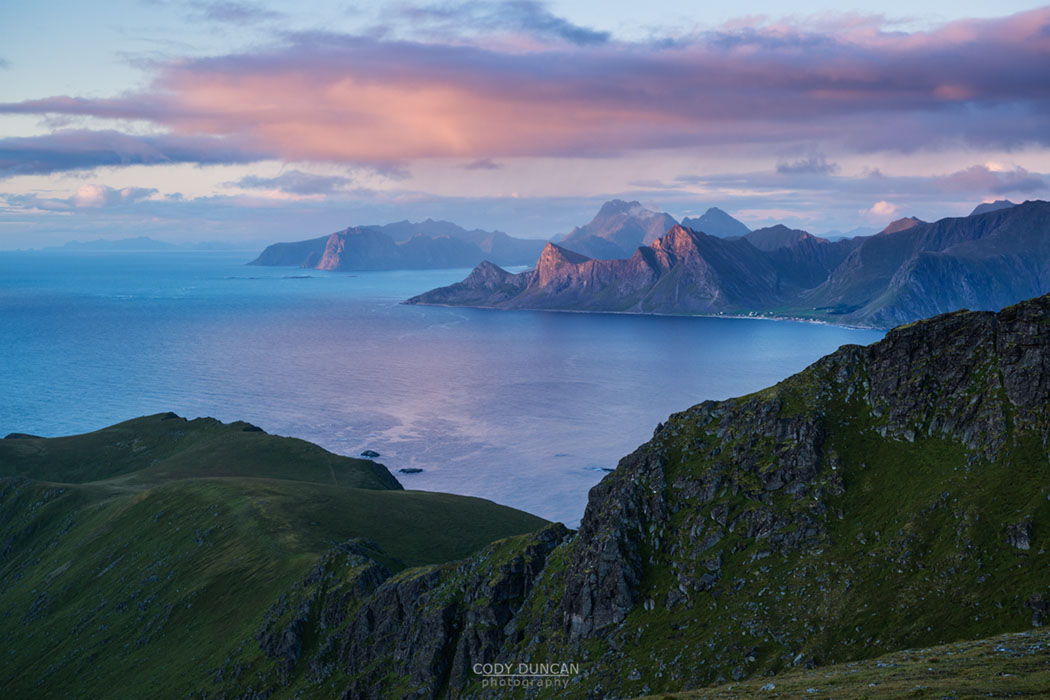 I will be on Lofoten now for more of less the whole of September.  Hopefully the weather is as good as the previous two years, as I have put together a pretty long ‘to-do’ list of mountains to hike.  And I have a few mountains I need to hike again, hopefully with some better weather, to add more hiking guides to this website, as it seems there is some new competition out there these days.

If you see someone (me) in an somewhat ugly bright blue jacket, come and say hello.  Or you can try and contact me via FACEBOOK or INSTAGRAM if you know you’ll be around…

I want to try and remain on Lofoten as long as possible, especially as the chance for northern lights grows with the ever darkening nights of autumn – the best displays always seem to be the day after I leave, so I suggest scheduling at trip for the beginning of October! 🙂

It will be a long trip down from the north car, and not knowing what the weather may due, I might be forced south a bit earlier than planned.  Plus, this will be my first ever opportunity to visit central Norway by car, and there is a huge list of place I want to see or re-visit from my hitchhiking days of years gone by. 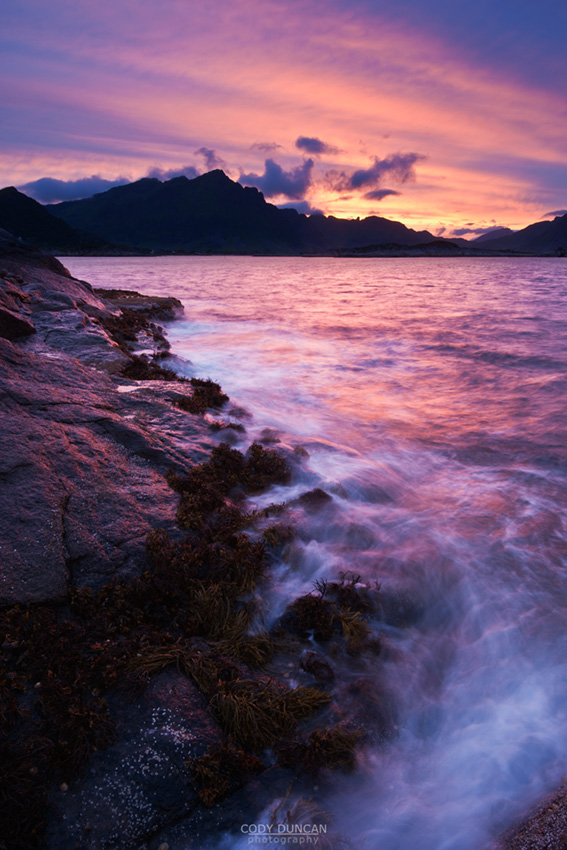 The year 2010 was my first summer back on Lofoten for four years, having spent my last few trips getting to know the islands in the other seasons.  As usual, my first stop on the islands was the Stamsund hostel, where I had arranged a meeting with a German friend whom I had spent some weeks with during the previous autumn: a fellow Lofoten addict.

Despite the village of Stamsund not being the most interesting place on Lofoten, there is still something of a wild and unspoiled coast just a short distance from the harbor beyond the hostel.  I have stood upon these rocks dozens of times in all sorts of weather.  They are one of those places where I can be sitting inside and eating dinner and then Roar will come knocking at the window, ‘ Come outside, the sky is pink!’

And so I gather my camera and run out across the rocks, sometimes a little slippery if it has been raining, and head towards the sea.

This evening a bitter wind was blowing, but the light was brilliant.  I found a somewhat sheltered spot on the rocks to take this photo, the waves crashing at my feet.