Winter driving in Norway can be a unique and sometimes scary experience for those of us from warmer climates. In general, and depending on the amount of snowfall, the roads are not fully plowed, but rather a layer of compacted snow/ice is allowed to remain. Thankfully, the Norwegians use studded winter tires, which make the icy, snowy roads tolerable to drive on, however extra caution is always needed for those unfamiliar with winter conditions.

Any rental car should come equipped with studded tires as standard in winter at no extra cost. For Lofoten, this period is roughly October 15 – April 30. I do not recommend driving on ordinary winter tires, i.e. those that are more standard in Germany and elsewhere on the continent. For it is not really the snow that is an issue, but ice.

The relatively mild climate of Lofoten means that rain can fall at any time during winter. The transition from cold/snow to warm/rain is one of the most dangerous times to drive. While the Norwegian road maintenance crews prepare well for this, there is always a brief period of time where the roads are covered in a layer of melting snow and ice. The studded tires may at times struggle to keep you on the road on the wet ice, particularly in high winds and you need to take extra caution on any turns or inclines/declines. Especially in certain parking areas, such as Skagsanden beach, where you might be able to drive down and park, but then you won’t get enough grip to get back out again. I learned this the hard way… The bridges around Reine – Hamnøy can also be something of an annoyance – you need to stop at a red light to allow oncoming traffic to pass, but then you are unable to proceed up the slippery bridge before the light turns red again.

There is no need for a 4×4 rental in winter and most locals just drive normal cars. More or less any road you are allowed to drive on is paved or graded, so Lofoten is not like Iceland where you might have to cross wild rivers. That being said, the more compact type cars, particularly with front wheel drive (think Toyota Yaris or Nissan Micra) will be a little more difficult to handle should a snow storm arrive. Most of this is due to the lightweight of the car reducing the ability for the tires to get proper traction.

In heavy snow storms the road crews will do their best to keep the roads at manageable levels of snow. However, this means that some of the already narrow sections of the E10 become more or less single-lane roads at times if a snow plow has only managed to pass in one direction, or the traffic itself follows the same path made by others. Some of the more rural roads, i.e. the roads to Unstad or Eggum, might be snowed in for some time until the main roads are cleared. Many of the locals also own tractors or small plows and will do much of the work to dig out the village roads.

After a storm has passed, the snow has stopped falling, and the roads seem cleared up, you still need to be cautious about snow drifts, which can build up behind blind turns and arrive unexpectedly. And if you are choosing to car camp on some of the beaches, particularly Unstad, Utakleiv, and Eggum, be cautious that the road you drove in on doesn’t become covered in drifts overnight, leaving you stranded. Again, I have learned this from experience, and now take extra caution when car camping in stormy weather, usually choosing a less than ideal parking/sleeping area which leaves me with an easy escape, should too much snow build up overnight.

For inexperienced winter drivers, I do suggest avoiding any long and unnecessary driving when possible. This is one of the reasons I don’t recommend Harstad/Evenes airport in winter, as it is a long drive to Lofoten. It is also best to avoid driving during storms. ‘Bil I Grøfta’ – Car in a Ditch, is perhaps one of the most common headlines in Lofotposten during winter these days. If you have chosen to drive in a storm, or any other time for that matter, and notice a long train of cars behind you, be polite, and pull over at the next safe/convenient place and let the cars pass. People still live and work on Lofoten with daily commutes.

There will be some days each winter when it is simply impossible to (safely) drive and a general warning of ‘stay home’ will be posted in the newspapers. Typically, weather of this nature will be forecast several days in advance. In the unfortunate situation of a severe storm occurring during your trip, you will need to have some flexibility. This could either mean staying longer in your current location, or, if you have a departing flight, finding accommodation closer to the airport prior to the storm arriving. Lofoten also has several weak points along the E10, such as the Gimsøy bridge, which closes if winds reach over 25 m/s or so. If you need to get from Leknes to Svolvær for a flight on a day like this, it could be problematic. 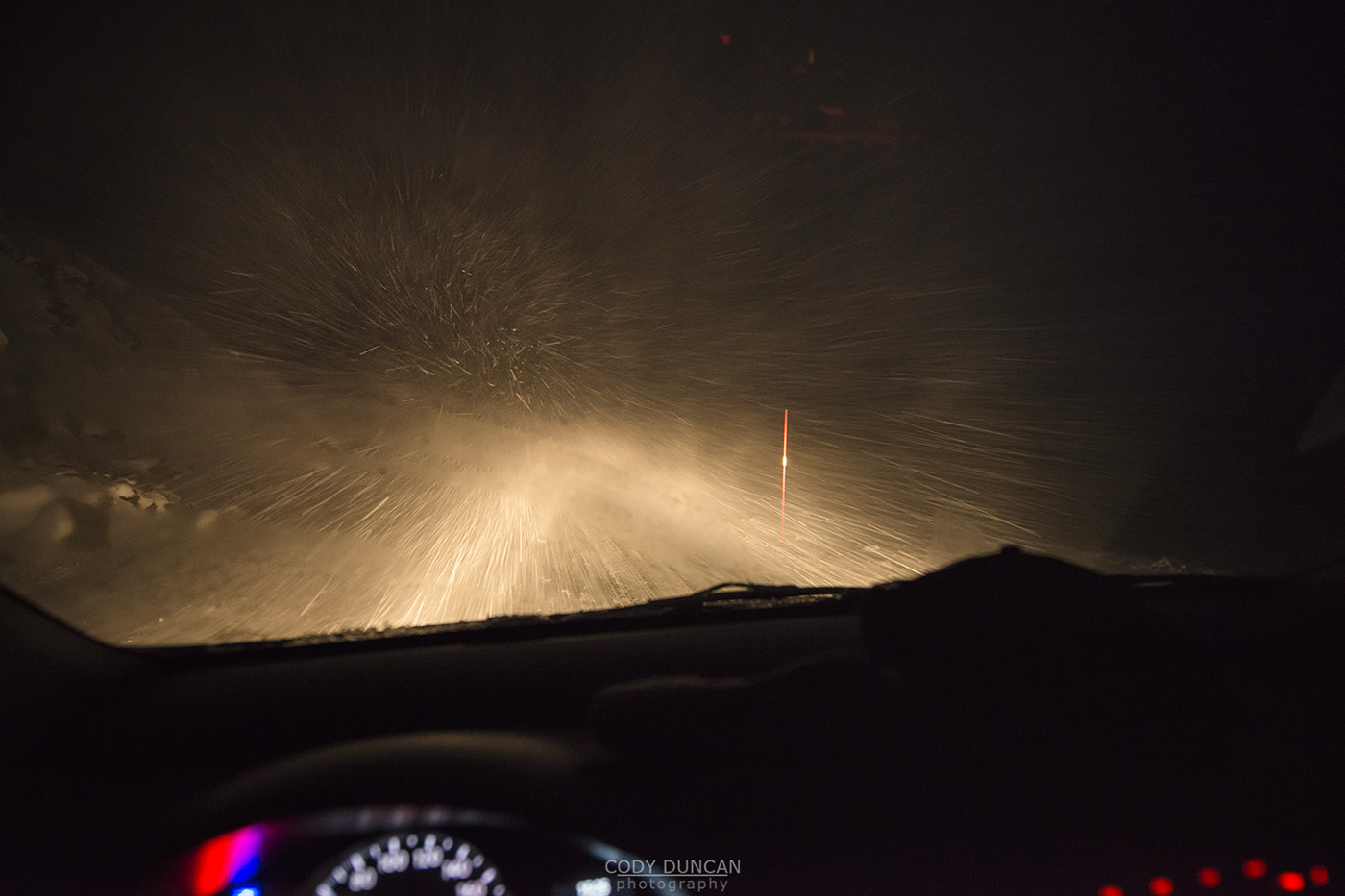 Darkness and heavy snowfall can be a difficult and exhausting driving experience.

With few exceptions, nearly all sections of road have a ditch just beyond the snow poles. This will often be hidden by snow and the effects of the snow plows, often making it look flat and level. Do not attempt to pull off the side of the road unless you are 100% certain there is suitable ground for parking. Possible signs of suitable parking will be the guardrail (if any) extending away from the road, or a snow pole placed further away from the road than the others.

The above being said, it is illegal to park on the road (pavement) itself in any area with a speed limit over 50 km/h – which means more or less the whole of the E10. In winter, this is marked by the snow poles. If any part of your vehicle is blocking the road, then this is not allowed. Another place where it is not allowed to park, are areas marked with blue ‘M’ – møteplass (passing place) – signs. 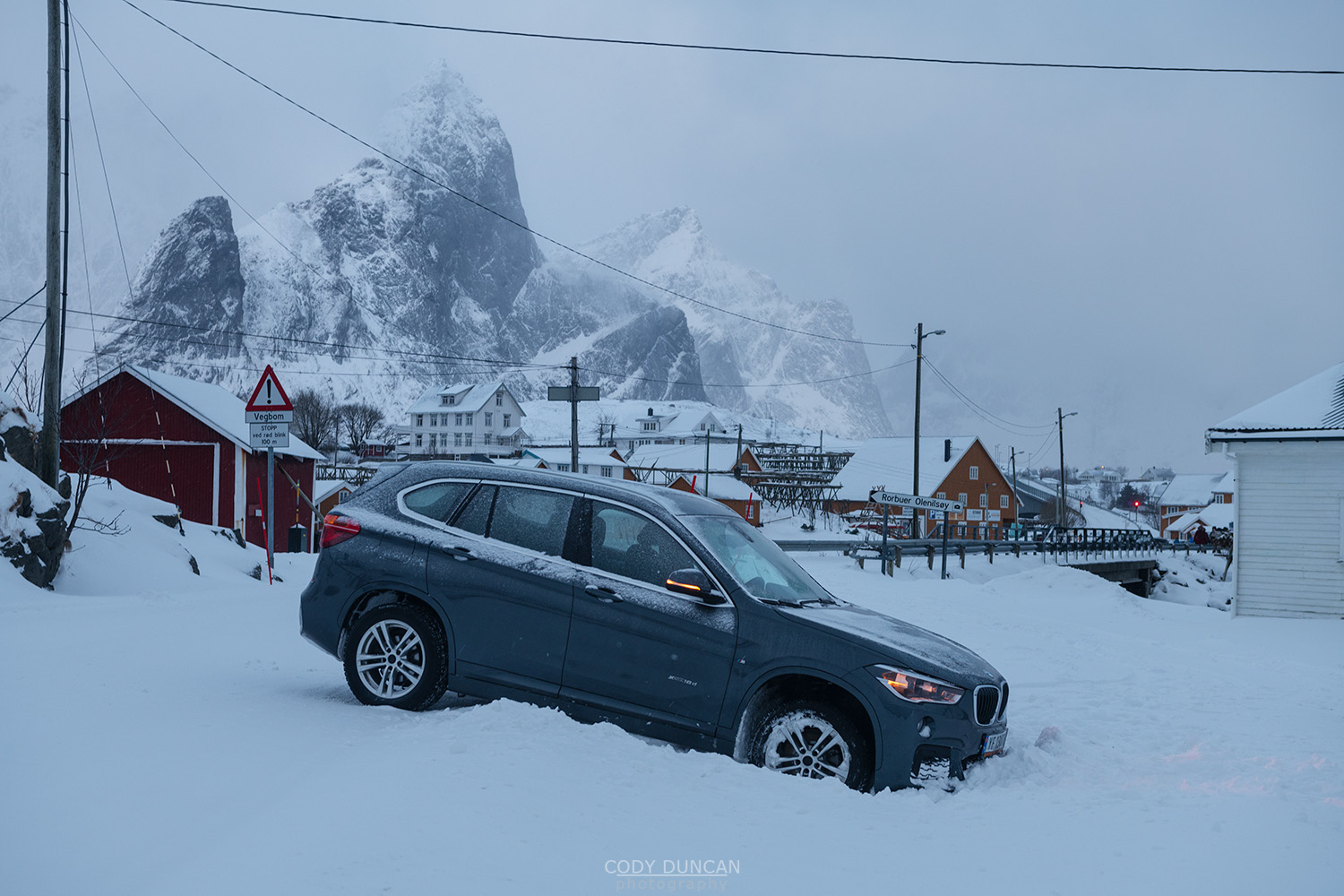 Stuck in a ditch: What looked like a flat spot to park, was not.

As a photographer or tourist visiting Lofoten in winter, a large part of your time on the Islands may be spent standing near the road in periods of low light and poor visibility. And, as many photographers and other tourists tend to dress in all black – Photography Ninjas, as I like to say – this can be putting yourself and others in unnecessary danger.

When you see the locals out walking, they are (almost) always wearing hi-visibility vests – such as most cars in Europe require you to carry for emergencies, or some other reflective device to keep themselves safe on the dark, narrow roads of Lofoten.

Increasingly, the rental agencies are including these with the cars, as well as some of the rorbu accommodation. If not, I suggest picking something up in one of the local shops and wearing whenever you are near the road. Many of the other cars on the road at twilight will be other photographers and visitors, possibly paying more attention to the views than the road, so keep yourself visible and safe! 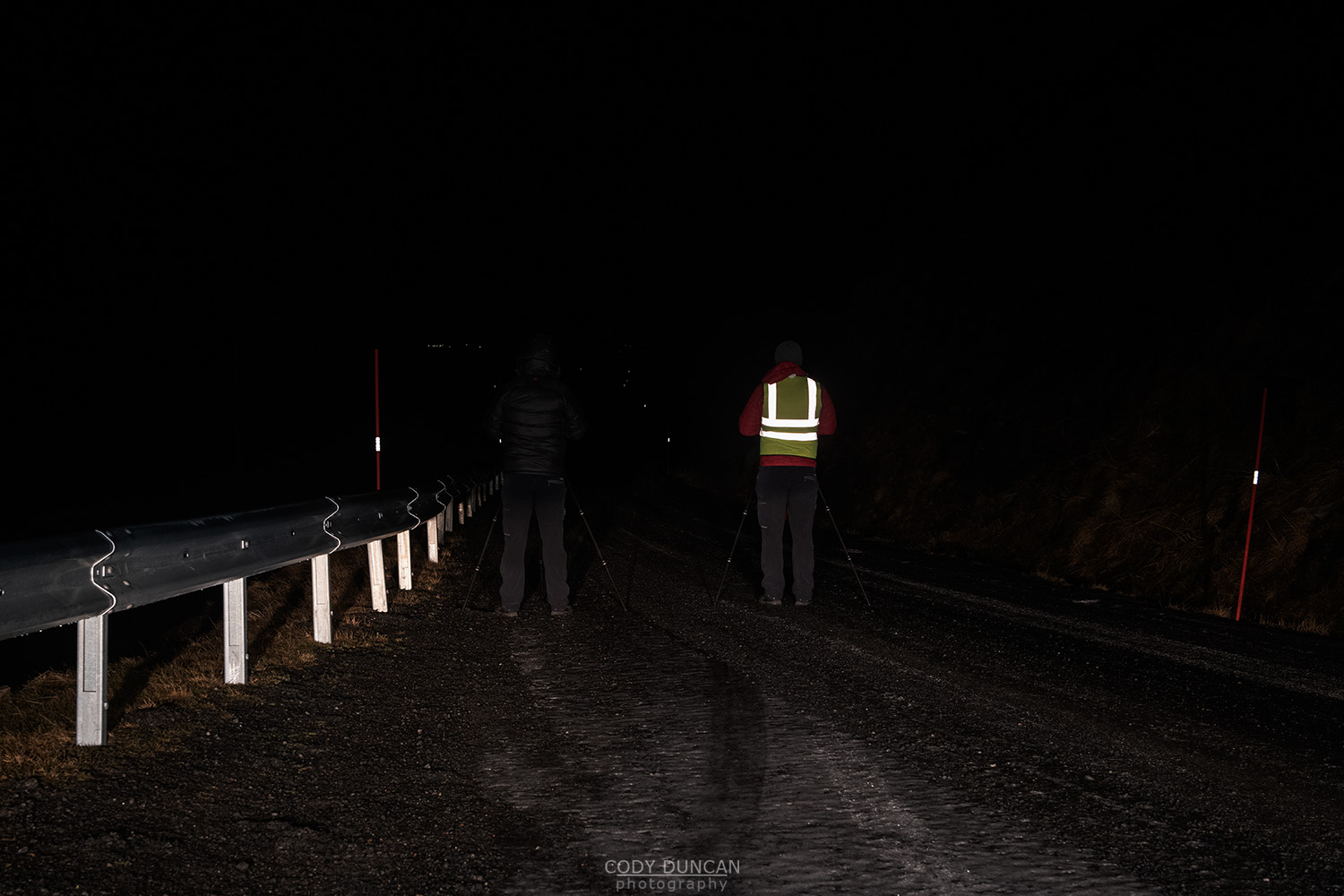 Driving around the corner looking for northern lights, which photographer is going to be seen standing in the middle of the road? 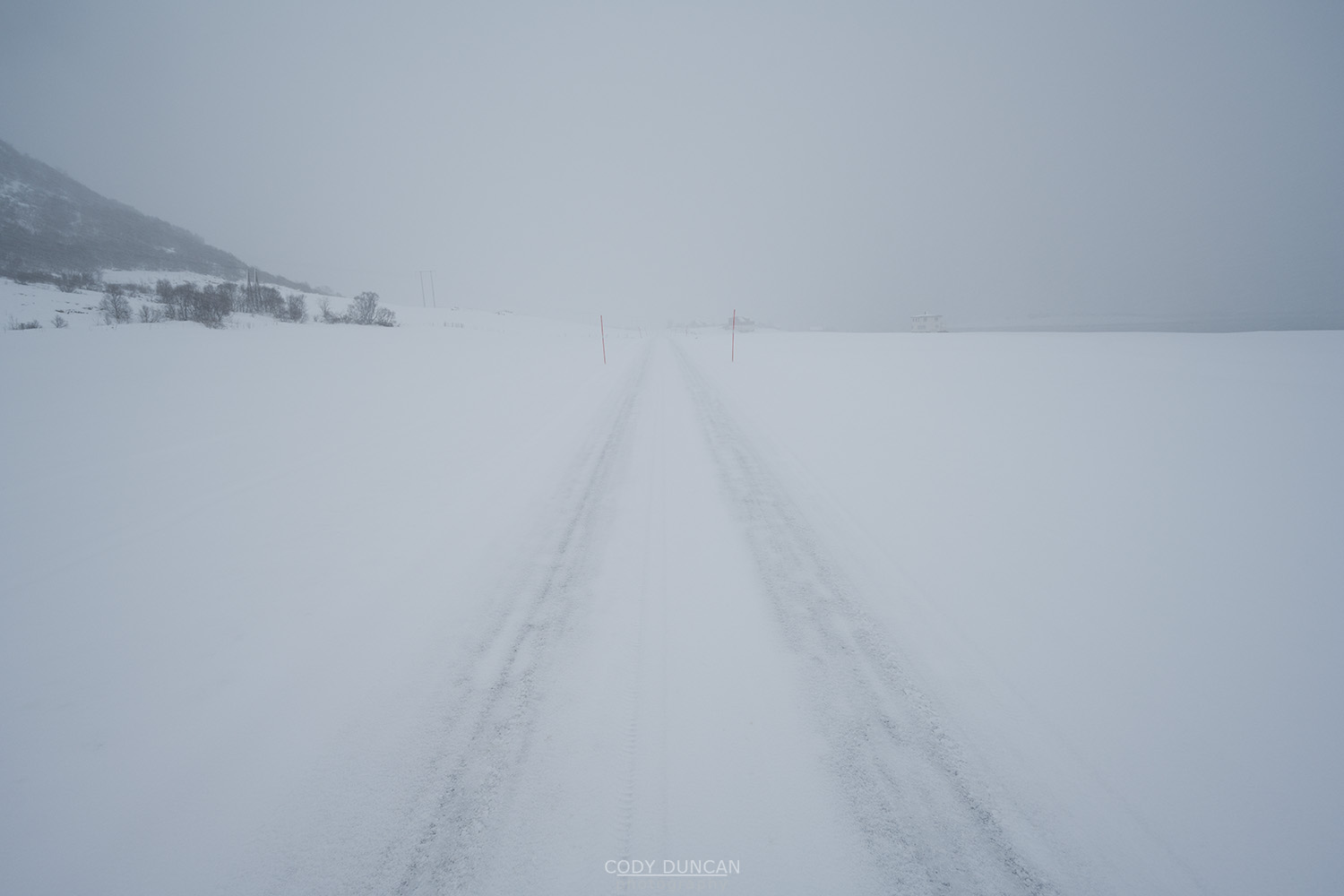 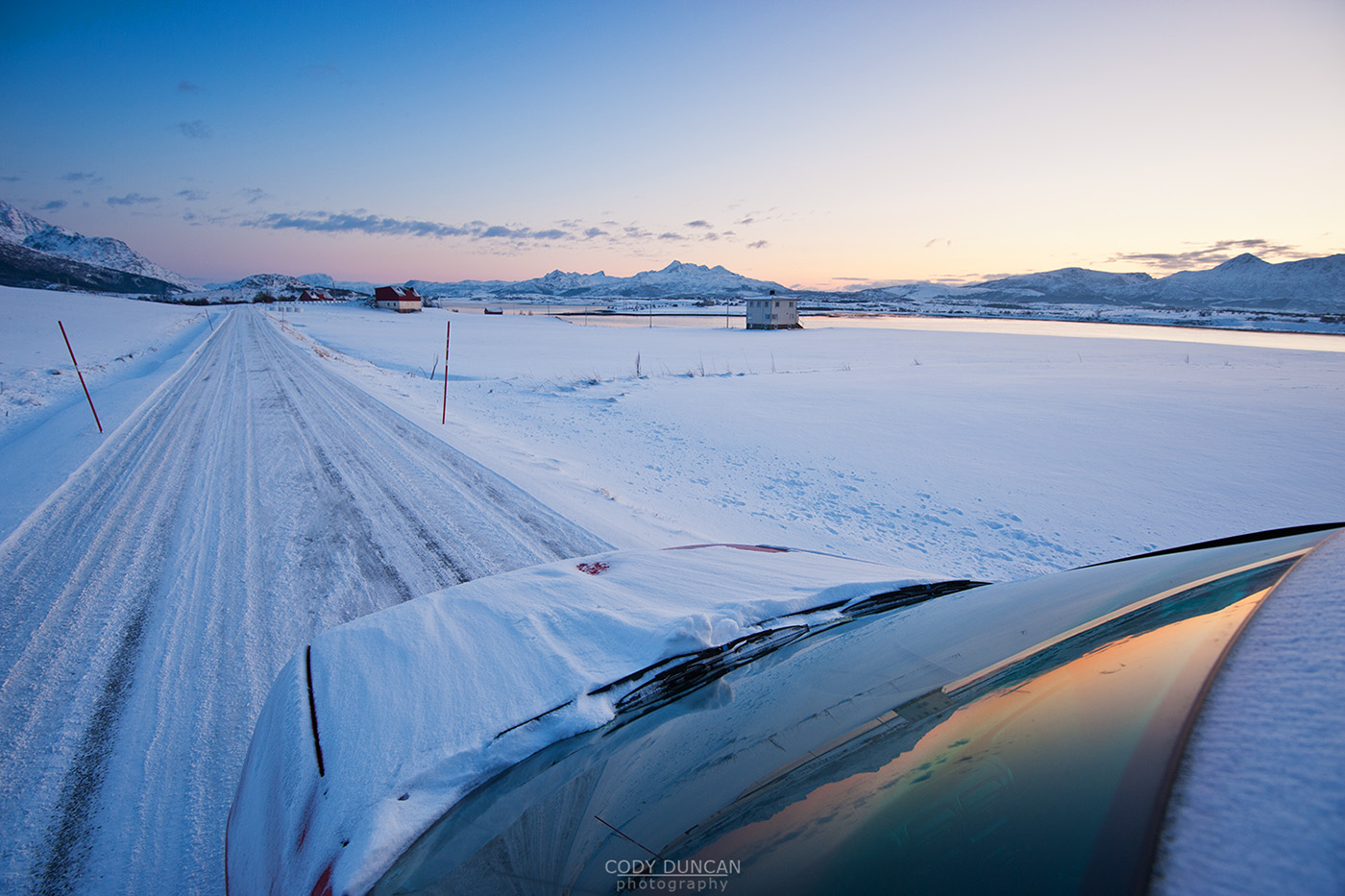 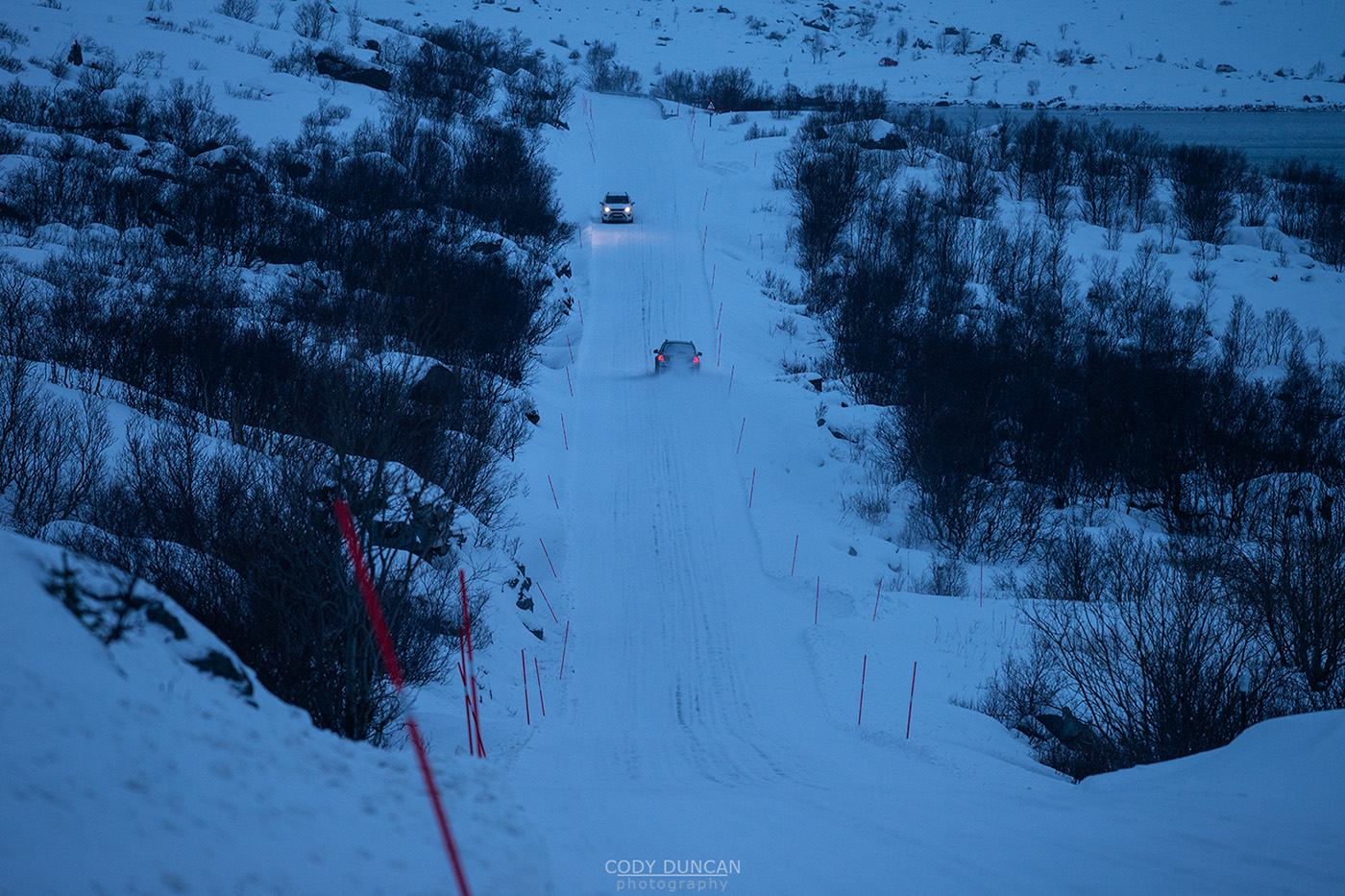 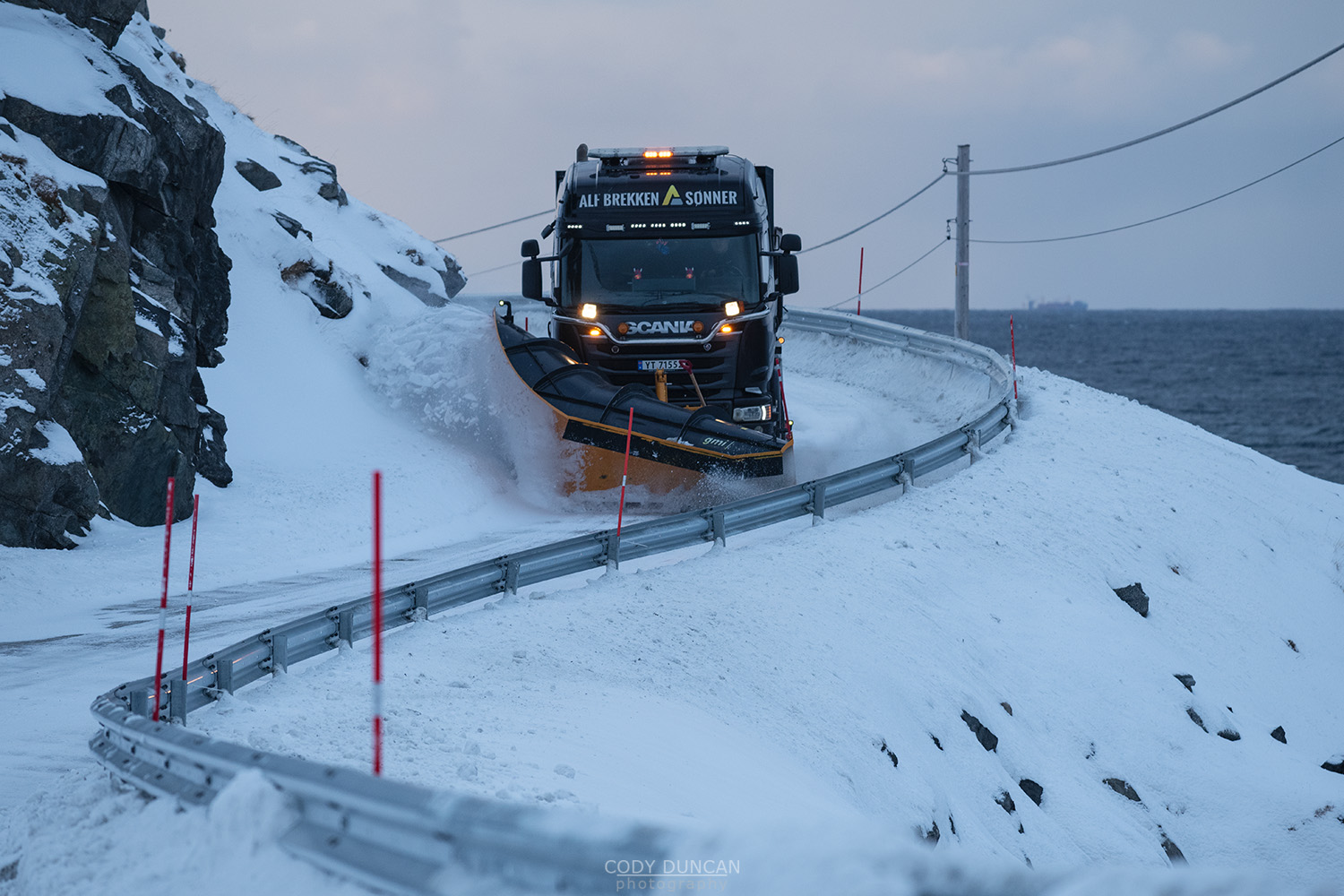