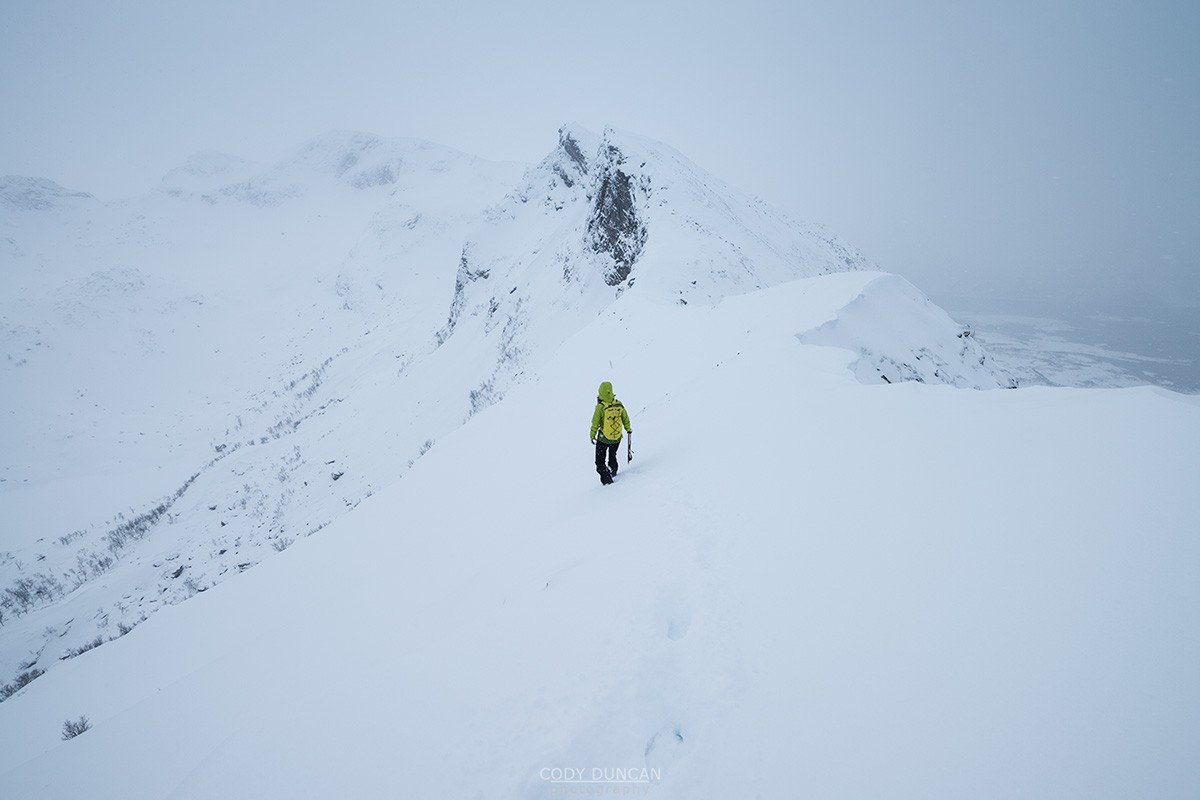 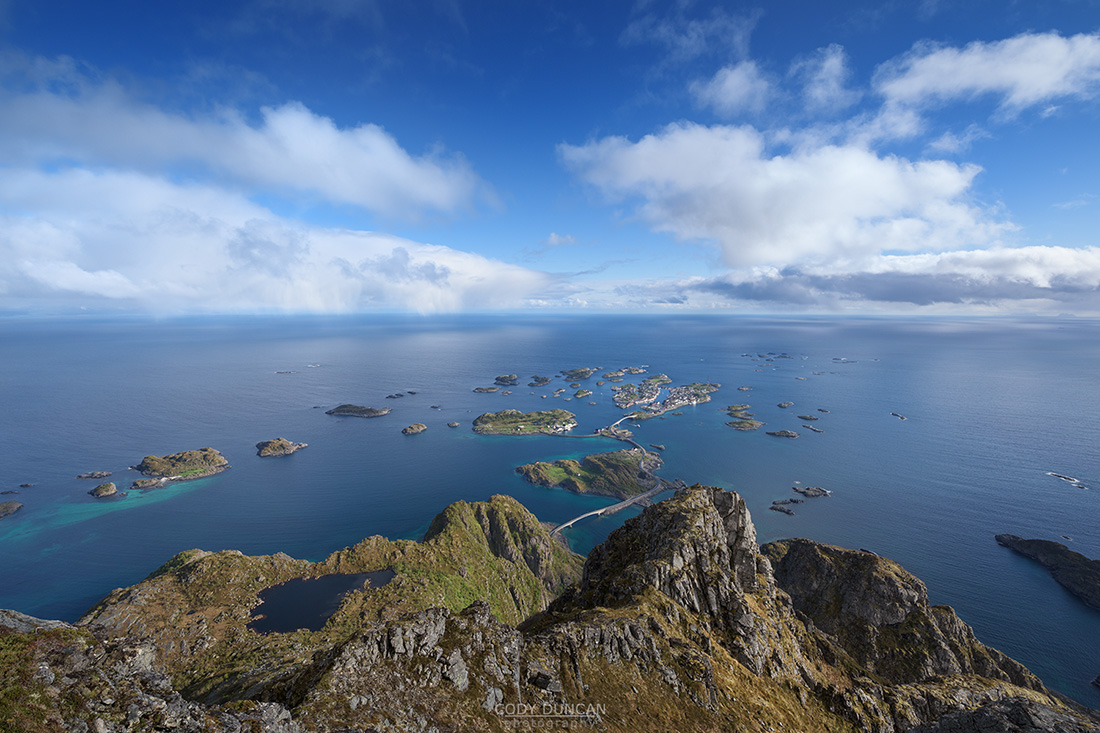 This image is a result of the necessity for flexibility in your plans when traveling to Lofoten – winter or summer. My goal for the day had originally been for Matmora, but as had been the trend for most of my days on Lofoten thus far, the summit remained hidden in a layer of clouds. Luckily, Festvågtind (see hiking guide HERE), near Henningsvær was clouds free – or at least when I decided to start hiking.

I initially arrived at the summit at the same time as a passing snow storm. But unlike the higher surrounding mountains, the clouds would quickly pass revealing what looked like a fantastic summer day if you were to ignore the near freezing temperatures on the summit. 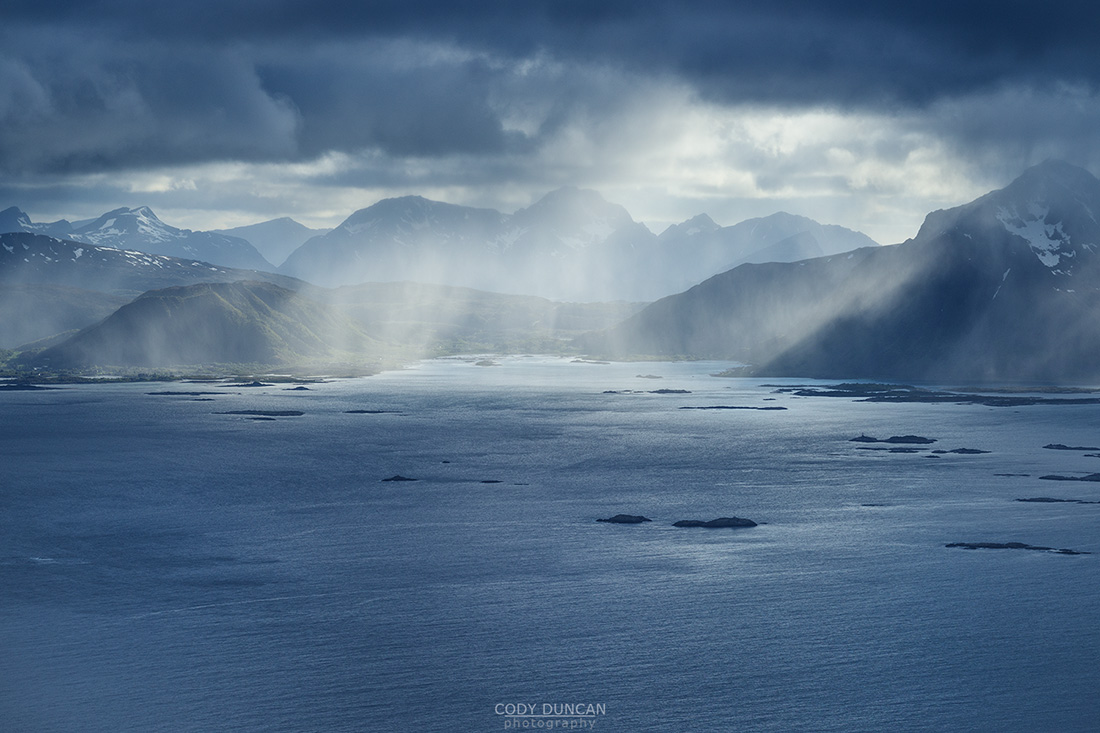 This is the view from the summit of Festvågtind (hiking guide HERE)  on turbulent summer evening. Over the hours I spent on the summit there was a constant transition between sun and snow. Wave after wave of clouds and snow flurries were approaching over the sea from the west, creating an interesting dance of light and shadow.

I have my Fuji xt-1 set up shooting time lapse sequences of the quickly changing conditions. But it was one of those days in which I had a half dozen cameras, as there was interesting light and clouds in almost every direction. 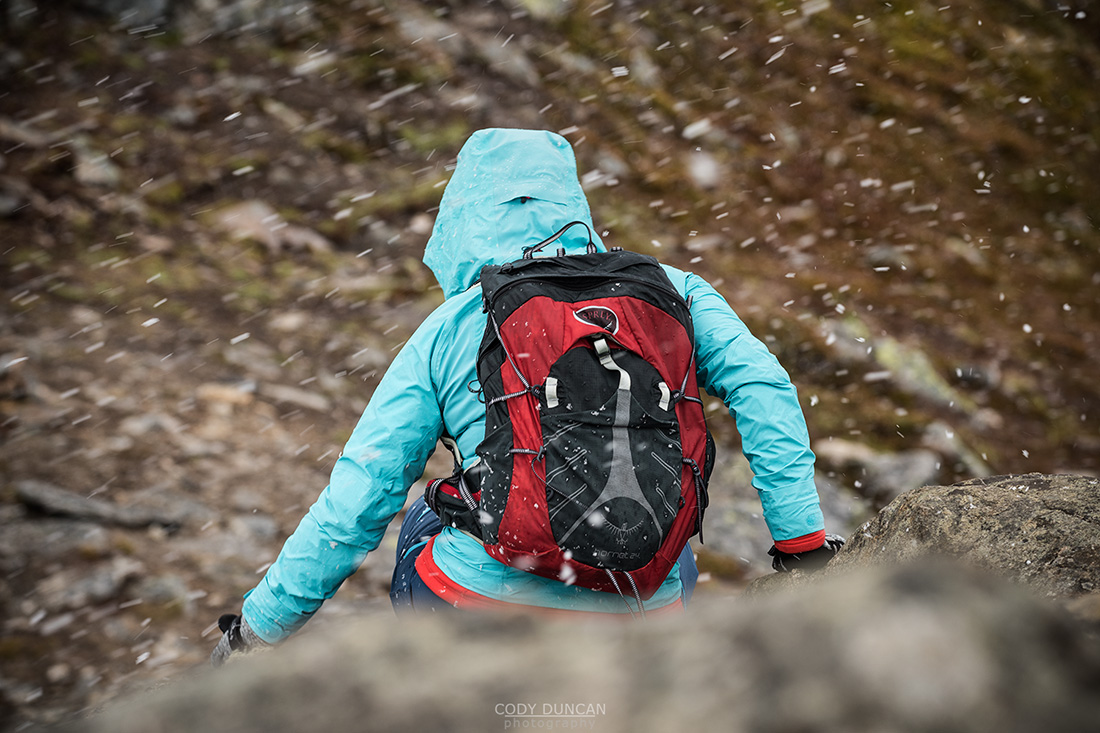 In early summer it’s important to be prepared for sometimes winter-like conditions if heading out into the mountains. In the typical changeable nature of the weather on Lofoten, we had started the hike under a nice sunny blue sky. By the time we reached the summit, we had to sit on the leeward side of the large summit boulders to wait out the first of many snow flurries passing the mountains.

Even as one band of snow passed, the next would already be lined up on the horizon, approaching from Stamsund to the west. But as quickly as the snow would arrive, it would leave again and the sun would be shining brightly. 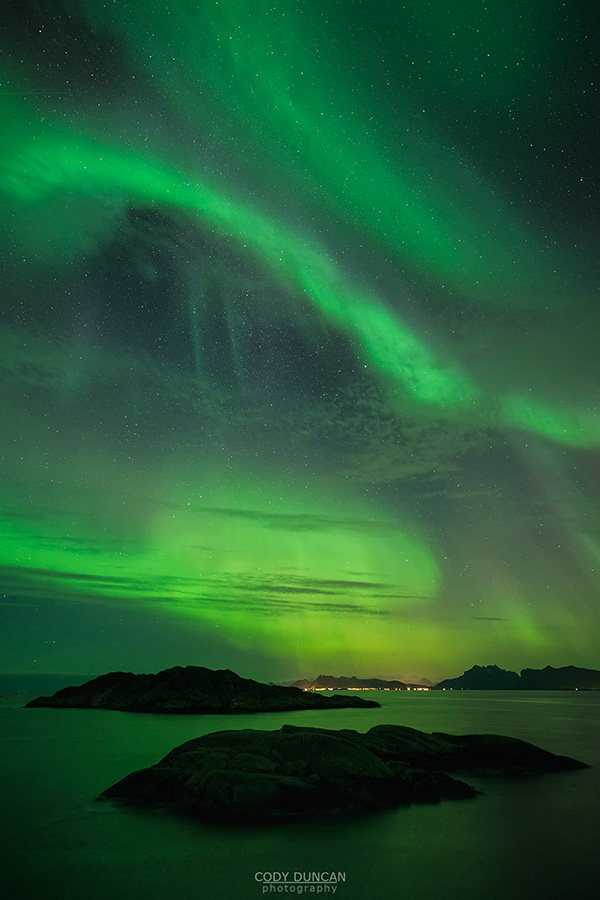 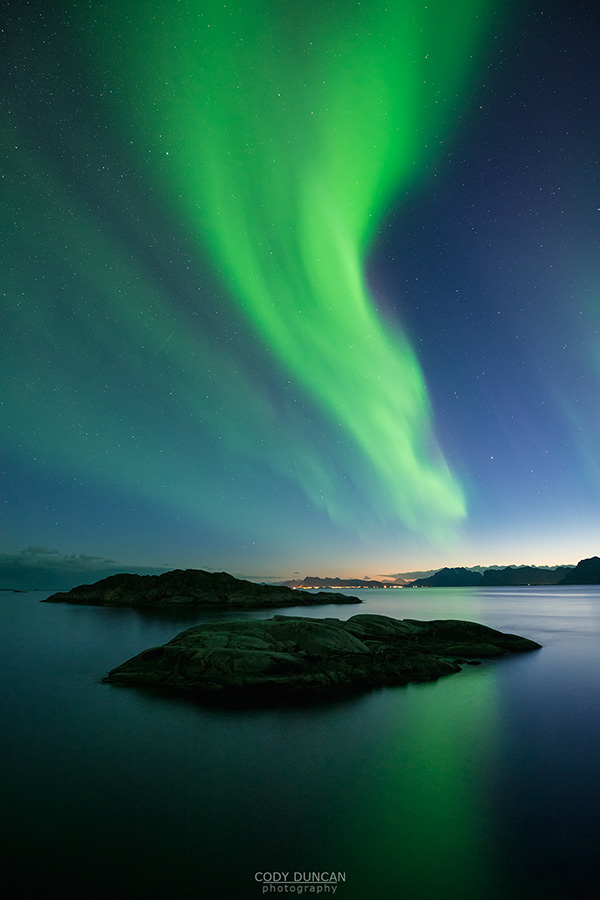 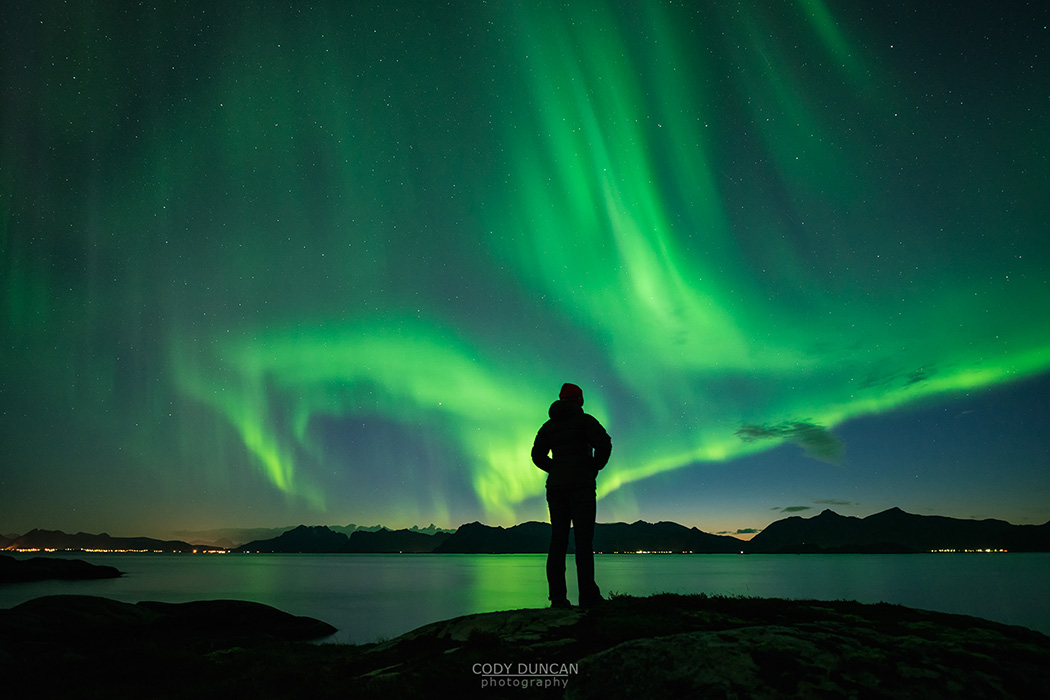 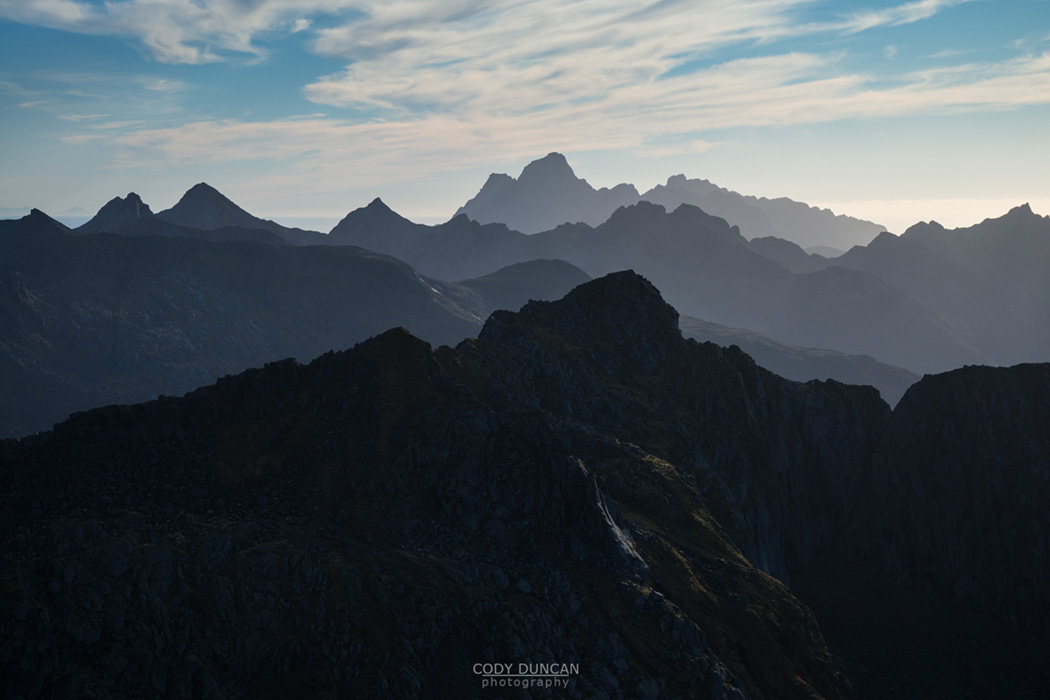 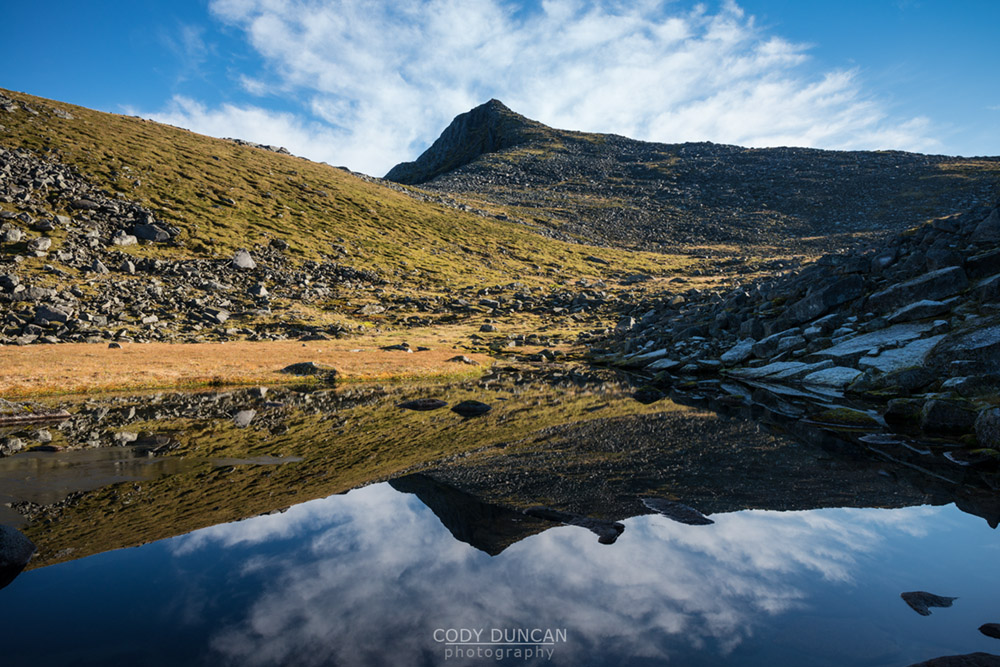 I have just added a new hiking page for the mountain peak Kroktind, located on Austvågøy. 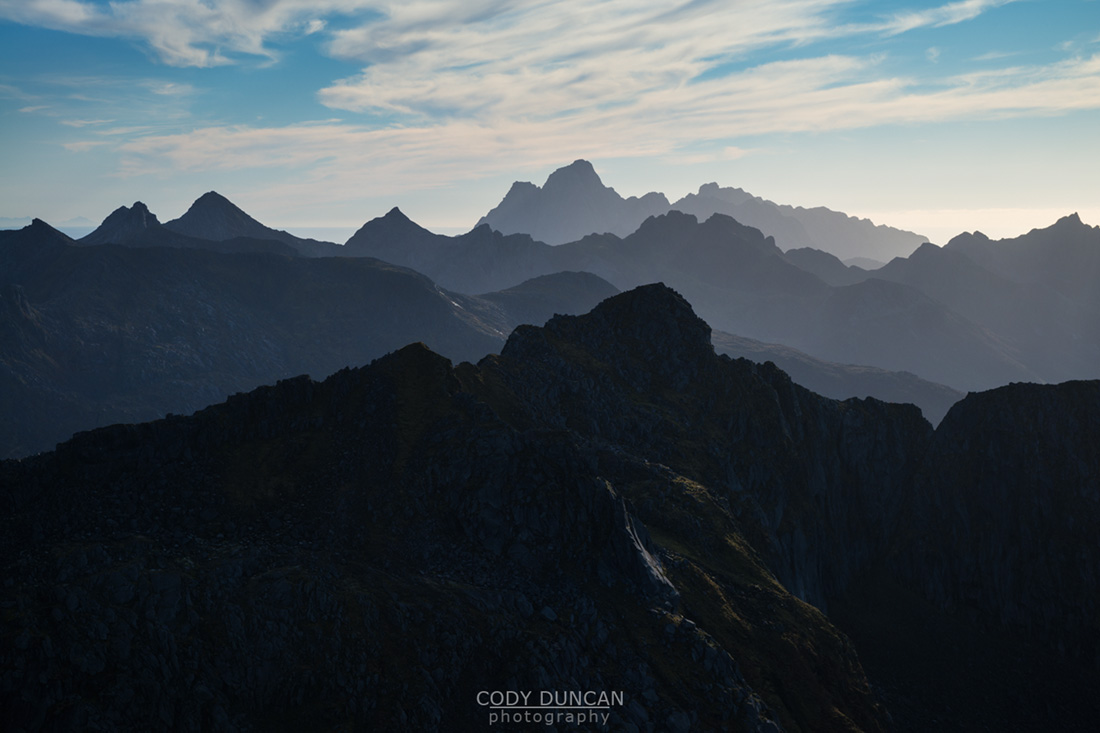 Photo: View from the summit of Kroktind over rugged mountain peaks towards the distant Vågakellen, Austvågøy, Lofoten Islands, Norway. 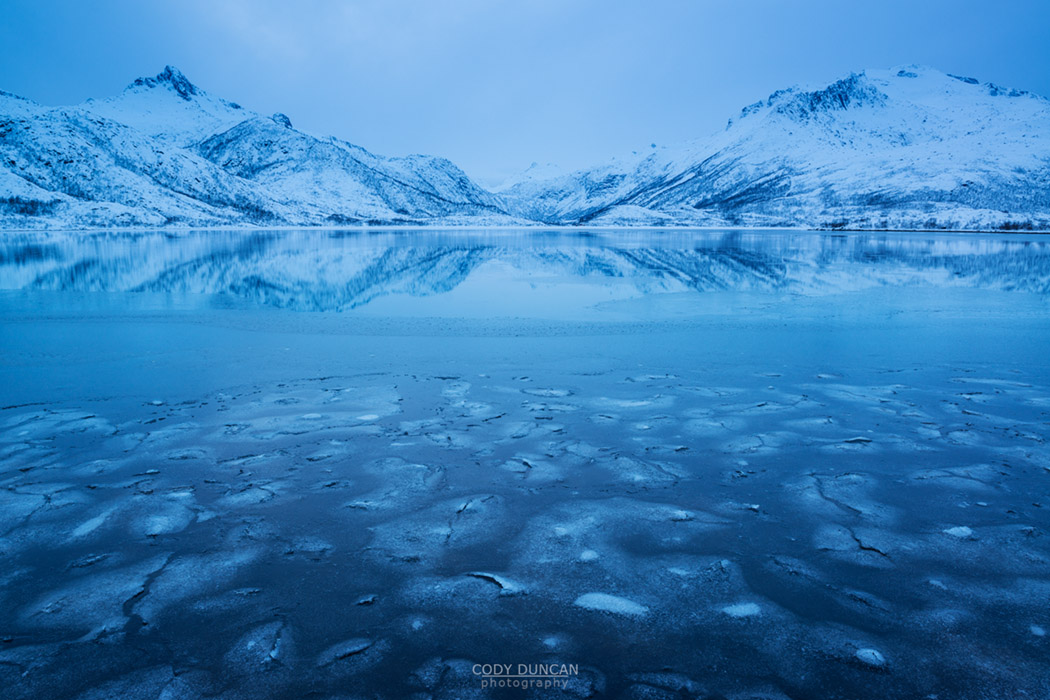 As the last light faded from the short February day I found myself passing Vatterfjordpollen on the way back towards Svolvær and in search for a car-bivy spot for the night.  I was actually thinking of maybe checking out the Lofoten meeting of the Norwegian Alpine Club, but the hotel looked a bit to posh for me, as so I passed on by.

When the temperature is sufficiently cold, some of the tidal fjords will begin to freeze.  Sometimes this creates something interesting and sometimes not.  The days thus far in the heavy overcast sky had mostly been a waste.  Another ‘weather’ day for Lofoten.  But in the darkening sky I wandered down to the fjord’s edge.

By far from my best image from the trip, in those first days on the islands I’m always anxious to take a picture of something, anything.  And as I drive in circles and see the needle on the gas tank fall, knowing next time I pull up to the gas station I’m going to blow through $100+, that desperation grows even further.  Sometimes I don’t have the patience to park in one place and read the day away, even though I know I should.