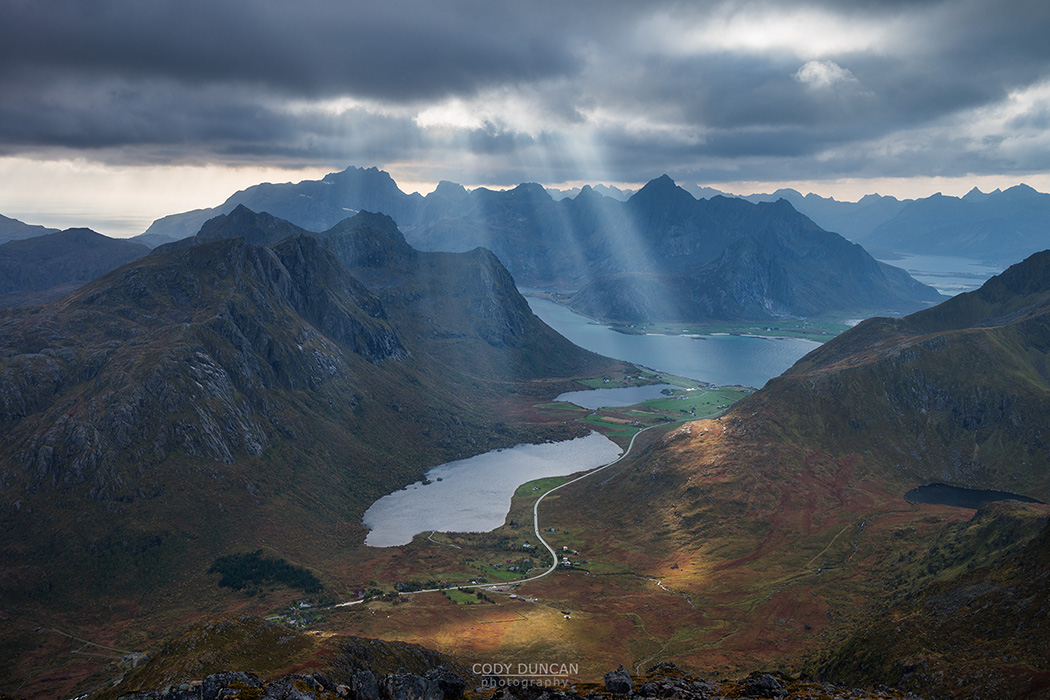 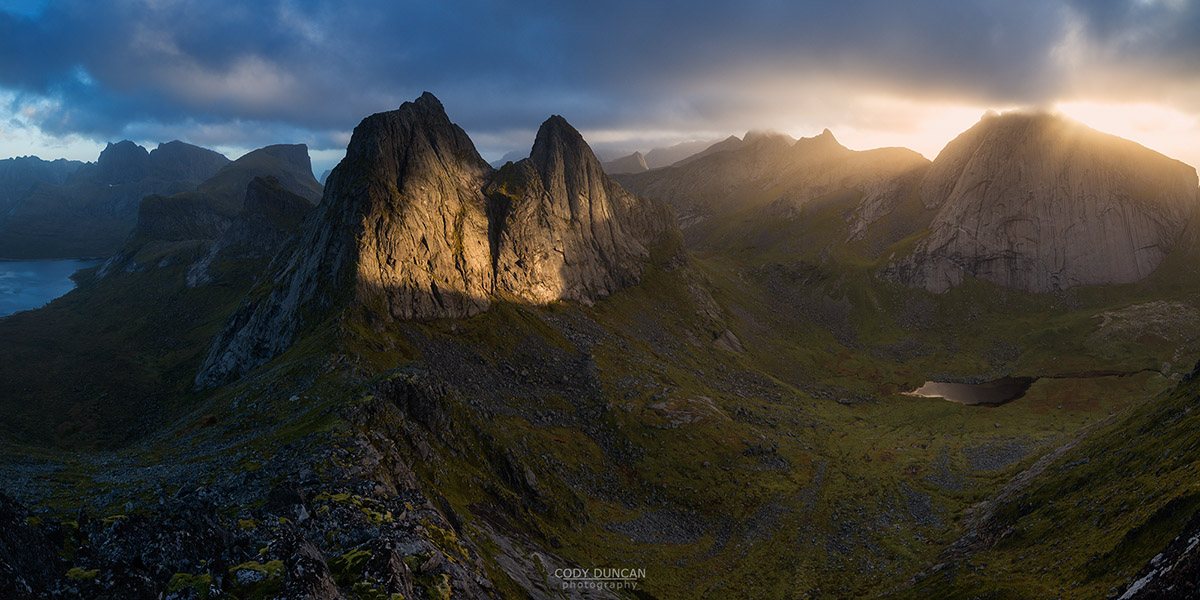 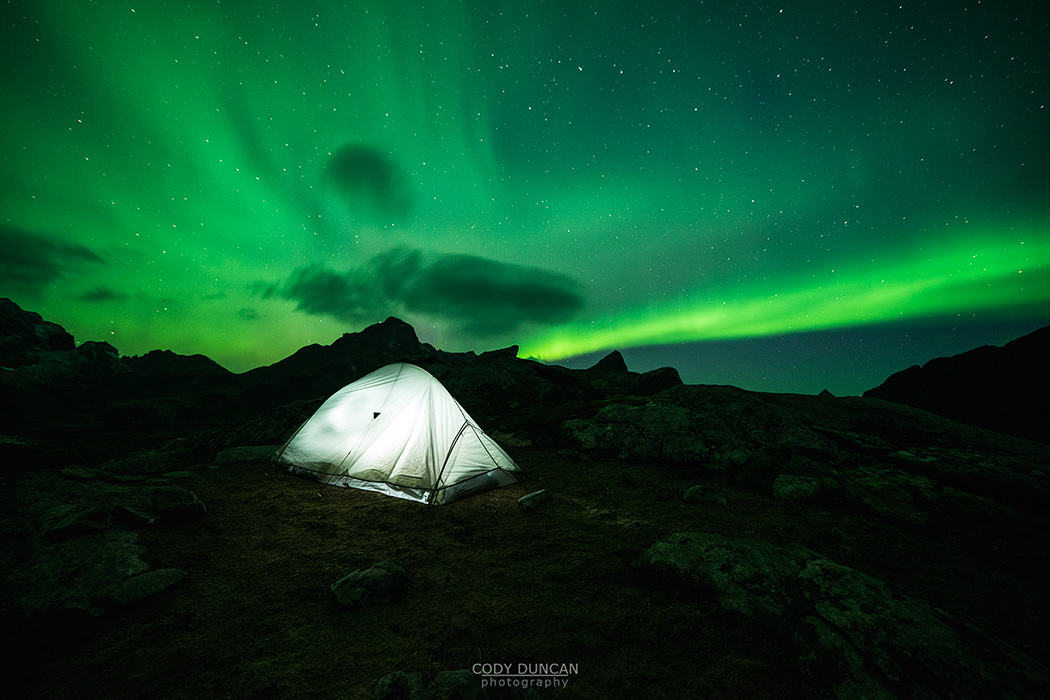 The journey to Munkebu hut is now a fairly familiar one for me, but the goal of this particular journey into the mountain of Moskenesøy was targeted at the peak of Munken.  With forecasts for clear skies, I figured it would be good to get another night in the mountains, in hopes of photographing some northern lights.

I have spent a good many nights in the mountains of Lofoten, but for some reason, they sky often remains quiet for me.  Not on this night though!

With the lengthening nights of Autumn, it’s not very practical to sit outside and wait for Northern Lights to possibly show up, not to mention the sub zero temperatures.  So I set my alarm to ring every 15-20 minutes so I can look out of the tent to see if the sky is doing anything.  On this night I didn’t have to wait long until I noticed a bright streak of green beginning to appear in the sky.

I first went off to setup my little Fuji XT-1 to shoot a time-lapse before returning to the tent to grab my main camera (Nikon D800) to see what else I could come up with.  The tent seemed like it would be nice, so here it is… 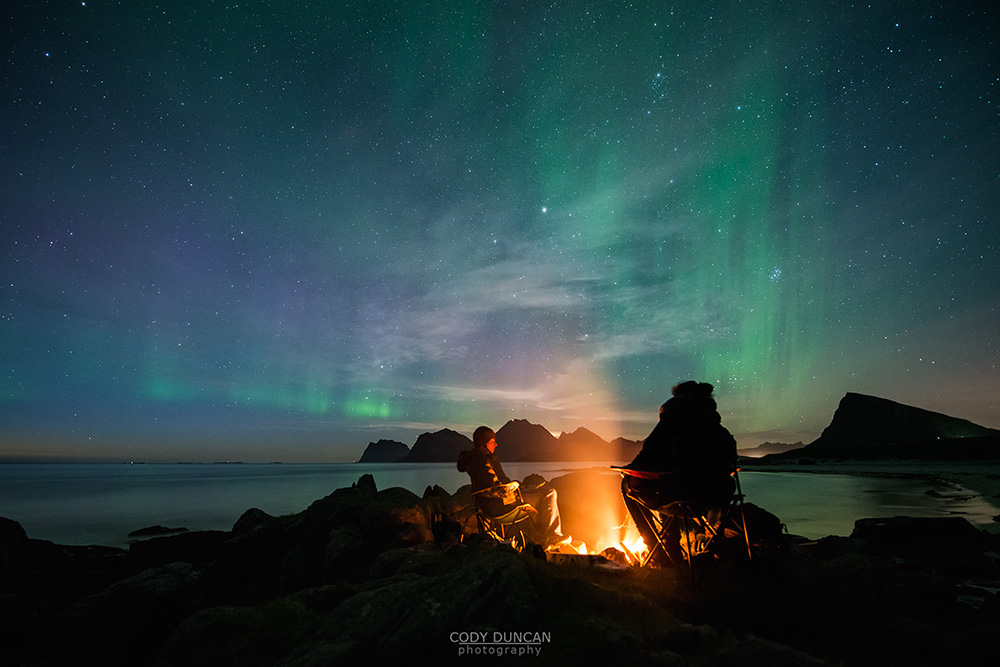 After two nights in the mountains I was sort of looking forward to a shower.  But unfortunately for us, the forecast was for another night of clear skies, so instead of the warming fire and soft bed of the Stamsund hostel, it was to be a night sleeping in the car.

A couple weeks earlier I had gotten in brief contact with Theo and Bee, a British couple traveling around Europe in their VW van – checkout their website and blog at VDubVanLife.  Anyhow, I sent them a text to see if they were up for an afternoon BBQ and campfire. They were.

Seeing as how we were both were sleeping in our vehicles, I figured Storsandnes would be a decent location – a good place for a BBQ, and if any northern lights decided to show up, a pretty good spot as well.

I love the month of September for its somewhat rare combination of (relatively) mild nights combined with long hours of darkness.  The only equivalent darkness you will find is in March, when you generally don’t want to spend all that much time outdoors.

As evening progressed, I decided we couldn’t carry on without a campfire, so Theo and I scoured the coast to collect driftwood for our campfire.  Luckily, this is an area seldom camped in, so there was plenty of wood to be found, enough for two nights of campfires as it turned out.

We sat around enjoying the fire for a while, but soon enough, I noticed that faint green glow in the sky; the horizon still carrying the colors of the day’s end.  At that point, the photographer kicks in and any enjoyment of the campfire disappears.  Well, that was until Theo and I thought the girls sitting around the fire with northern lights above would make for a nice photo.  And then proceeded to tell them to ‘sit still’ for the next 20 or so minutes… 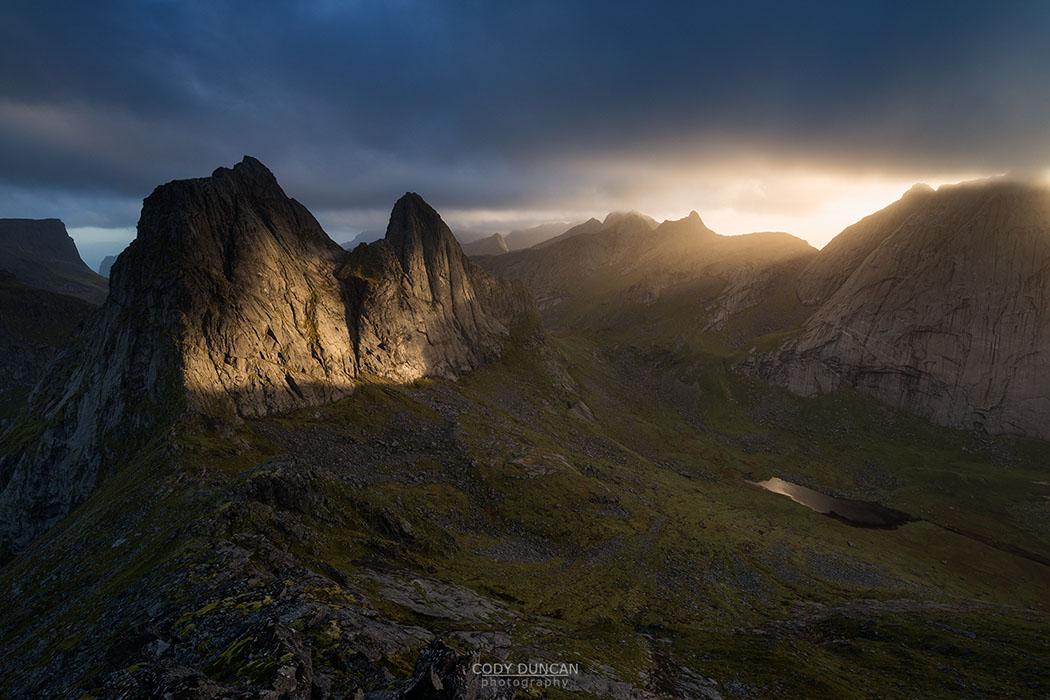 Photo: Ray of light on Kråkhammartind from the summit of Markan, Moskenesøy, Lofoten Islands, Norway.  September 2014

Markan was perhaps my favorite hike of the trip, no doubt due to some of the most fantastic light I’ve experienced while in the mountains of Lofoten.  And to think I could have easily missed this one and headed elsewhere as the weather was considerably worse than the forecast.  I actually spent a couple nights camping at the pass below the summit to use as a base to explore several more mountains in the area due to the somewhat long, and more importantly, boggy approach – best to get wet feet only once.

Anyhow, enjoy the page, and maybe give thought to heading up there yourself one day, the whole area is really wonderful and scenic…