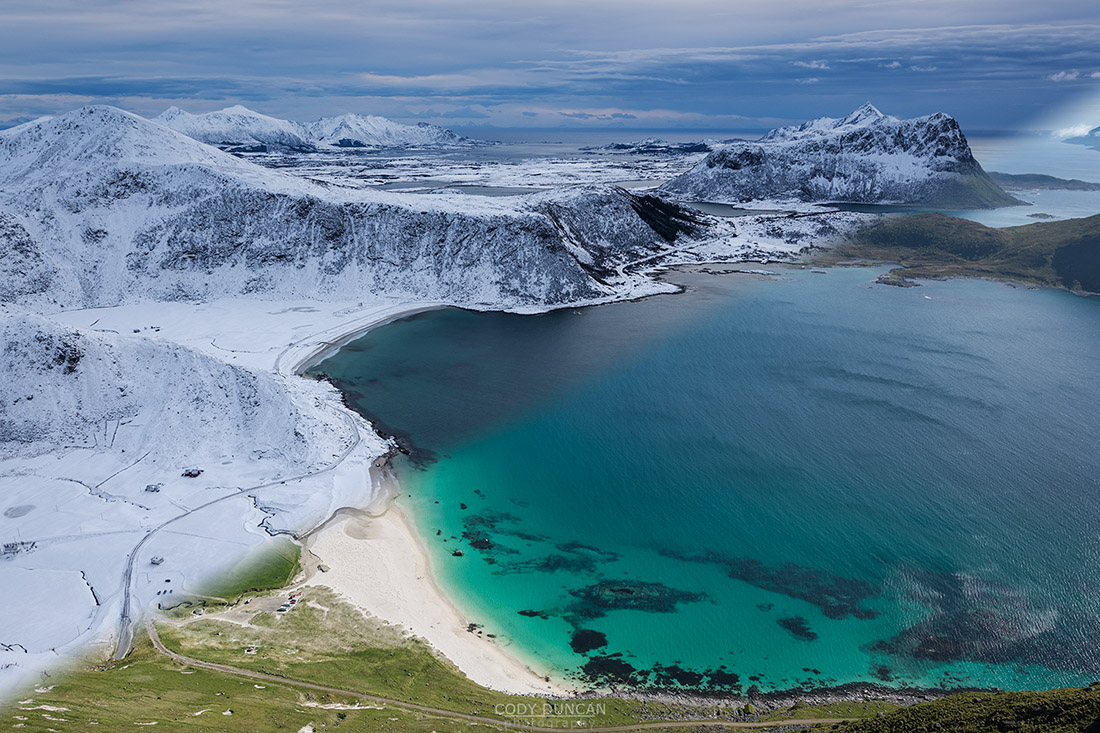 I thought I’d show something a little different this week.  This images is more of a happy accident than something I intentionally planned; I stood on top of Mannen two times this year and took the same picture twice: once in winter, once in summer.

I thought this would be a cool way to show how different the same location can look just a few months apart.  I have been receiving a lot of emails lately asking for the ‘best’ time to go, and this is something I struggle to answer. Is winter better than summer? I don’t know. If you want to hike, enjoy the midnight sun, camp at Kvalvika, etc, then summer is better.  If you want bleak, abstract landscapes, chances of northern lights, and short, atmospheric days, then winter is better. I guess in a round about way, and the way my journey has taken me, you just have to see the islands at every time of year; every season is different and unique in its own way.

So which view do you like better: summer or winter?

And due to the low snow of February 2014, the mountains themselves weren’t in their top shape, so it was beneficial to use some local architecture as a foreground element in the photo.

I’m happy to announce that the 2nd edition of the Seasons on Lofoten – Winter Ebook is now available!

You can find the ebook HERE – SEASONS ON LOFOTEN – WINTER

The good news is, the price is remaining the same at $10. The better news is that anyone who has already purchased the original version will receive an automatic, free update. So keep an eye on your inbox. If for some reason nothing shows up, then feel free to contact me with your order number…

The major updates in the ebook include:

It is always hard to decide how long to wait around the mountains. The light of the midnight sun is on of the main draws of summer on Lofoten, but a relatively cloudy horizon such as this day, you might not end up getting any light as the sun hovers over the sea. So, if you’re wanting better odds of sunlight on your scene, you need to head up a bit early. In this case, I left the car around 19:00 – with plans not to return until 02:00 at the earliest.

It was a 1 hour hike up the ridge towards Nonstind (see hiking guide HERE) to get to this view point. By the time I arrived, there was still enough gaps in clouds to allow brief moments of golden light to shine across the beach and valley below.  Soon enough though, the clouds thickened and Unstad was left in shadow for the remainder of the night.

Shot during my visits during the summers and autumns of 2013, 2014, 2015. Some of you might have seen this already, as it’s been over on my Vimeo page for a couple months already, but I ran out of time before leaving home in August and have only just now begun to get caught up with things! I’ve also added it to my VIDEO page as well, where there are a couple other things to watch as well, so if you haven’t go check it out! 🙂

And now for some updates:

If you haven’t seen it yet, I will be guiding one winter tour on Lofoten this year. You can check it out on my PHOTO TOURS page. I planned it around the full moon, so we should have the best shooting conditions for northern lights – should the occur. And it’s been a good start to the year so far, I saw them on the night of August 18, while floating on a sail boat off the east coast of Greenland, with the sky still light enough that I could get a half-way decent image from the boat!

I’m also thinking of offering a late summer or autumn workshop that focuses a bit more around hiking and getting to some of the more distant places on Lofoten. If you might be interested, let me know…

Greenland? I kept the trip a little low profile as I wasn’t entirely sure how things would go as the sea ice off the east coast was thicker than normal this year in the area we hoped to reach. While I was on Lofoten in June, photographing the final content for my summer ebook, I received an email asking if I wanted to photograph a sailing expedition from Iceland to Greenland. I couldn’t say no!  But until I was boarding the boat in Iceland, I still wasn’t sure that it was real. And though Greenland had been on my mind for a while, I had sort of resigned myself that it would be another few years before I could get there. How quickly things change!

I’ll write more on that later, but as this site is still 99% Lofoten oriented, I’ve decided to start an new website and travel guide, with a bit more focus on stories and other travels; but still focused on the north.  I’m also home only a few days from hiking 270 kilometers on the Kungsleden trail up in Sweden, the reason I didn’t get to Lofoten this autumn at all – I was just across the border enjoying the best September weather I’ve ever had in the north of Sweden. There will be a lot of content to come out of this trip as well over the following months, much of which will also be the foundation for my new project. So keep an eye out…

I also have another hiking guide or two to add to this site, which will hopefully be online before too many more weeks have passed!

By the time of this image I had been waiting several cold hours on the summit of Hustind. My feet were wet from the hike in, and there was a near constant, sideways blowing, heavy and wet snow streaking across the summit. But I was focused on waiting for some light. I gave myself until midnight for conditions to improve, then I would head down and search for light elsewhere.

I had packed my gear away and was getting ready to head down when I sensed an easing of the storm. And then suddenly, the snow stopped and the clouds cleared from the summit. I could snow see the world around me.

My first trip up Hustind was in February, where I had a few seconds to take in the view before being caught in the white-out of a snow storm. In those brief views, I imagined the summit would be a nice place to watch the midnight sun from. Fast forward to June.

With low clouds, I knew the 600 meter summit of Hustind would be a bit of a risk, but it was the last day of my trip with any sort of a decent forecast before conditions deteriorated for the rest of my time on Lofoten. In the late evening, with snow falling around me I began to make my way across the boggy ground the the mountain.

I arrived at the summit with wet feet, and most of the ascent having been made under heavily falling snow. The winds on top were bitterly cold, somehow I had found worse conditions in June than I experienced in February!

The summit was just in the cloud line, but on rare occasions the cloud with lift slightly allowing a bit on the midnight sun to be observed before sending me back into the darkness again.