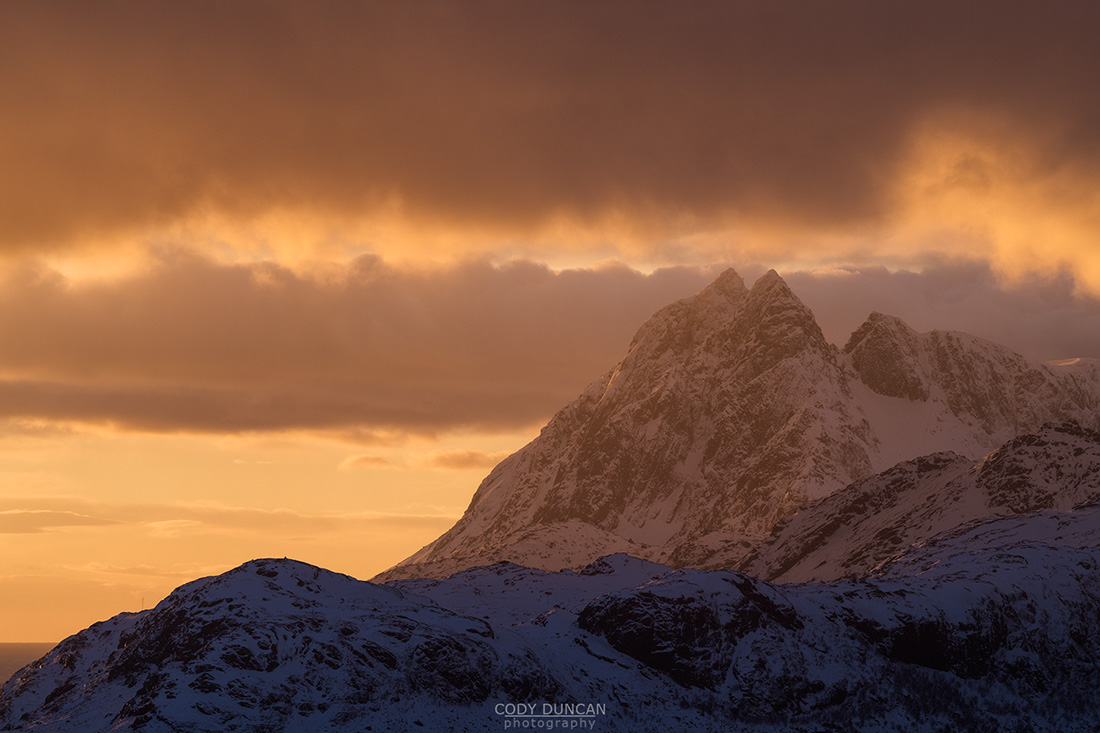 I got a late start on this morning, as I took my time packing my backpack for a planned night camping on Ryten. The beginning of the route begins in a low valley with limited visibility, but as we climbed the first hill, I could see the clouds overhead beginning to get some nice color.  Not knowing what was happening on the other side, I picked up the pace in an attempt to reach someplace with some light.

Well, there was no need to rush. It was one of those mornings where to sun seemed perfectly timed with the clouds, each moving in parallel with each other, keeping the light going and going.

Though my goal was Ryten – which turned out to be far to windy for camping, I spend more than an hour at this first location while shooting everything from 14mm to 200mm. This is a telephoto shot of Solbjørn peak, on Moskenesøy.

Stay tuned next week for the 14mm version of this scene. 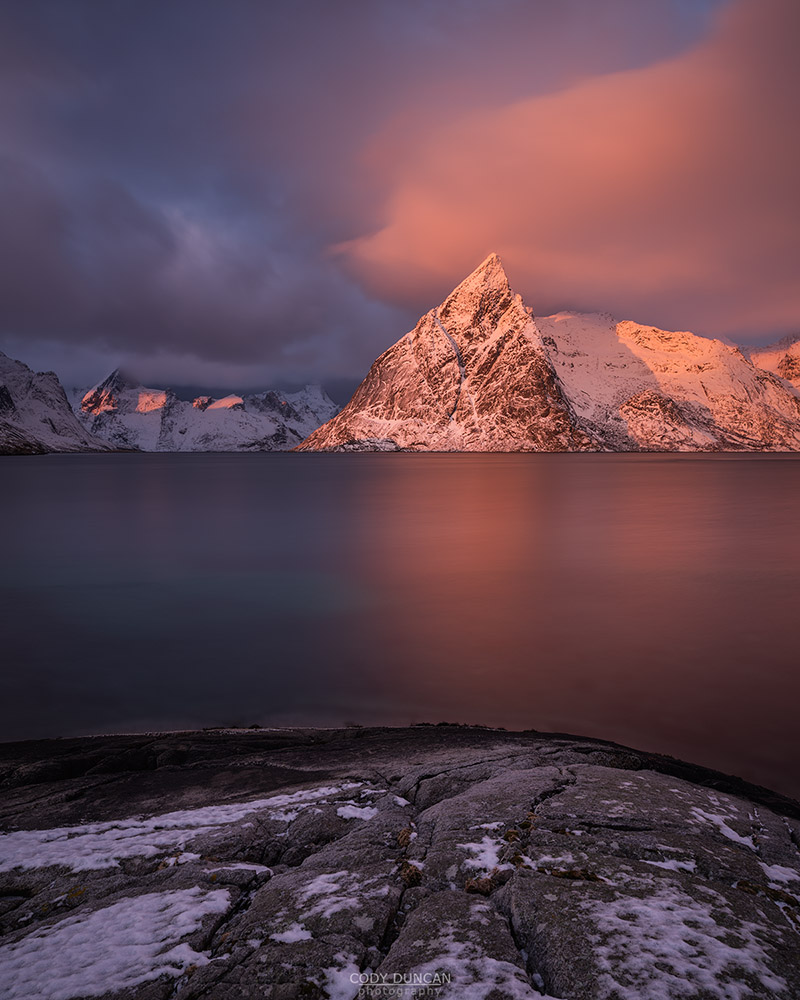 I’m not sure if I will ever have enough images of Olstind, and when I think I might, I’ll drive by and see light like this. There is a good reason that this is Lofoten’s, and perhaps one of Norway’s as a whole, most iconic mountain peaks. Rising like an Egyptian pyramid directly from the fjord, mountains don’t get much better in my opinion. Although someone had do go put a salmon farm at the bottom of the mountain a year or so back, which is a bit annoying!

With the southern oriented January sun, Olstind catches the first morning light, making the Reine area a good location to photograph in the mornings.  And for Olstind specifically, there is no shortage of locations from which to aim your camera at the mountain. 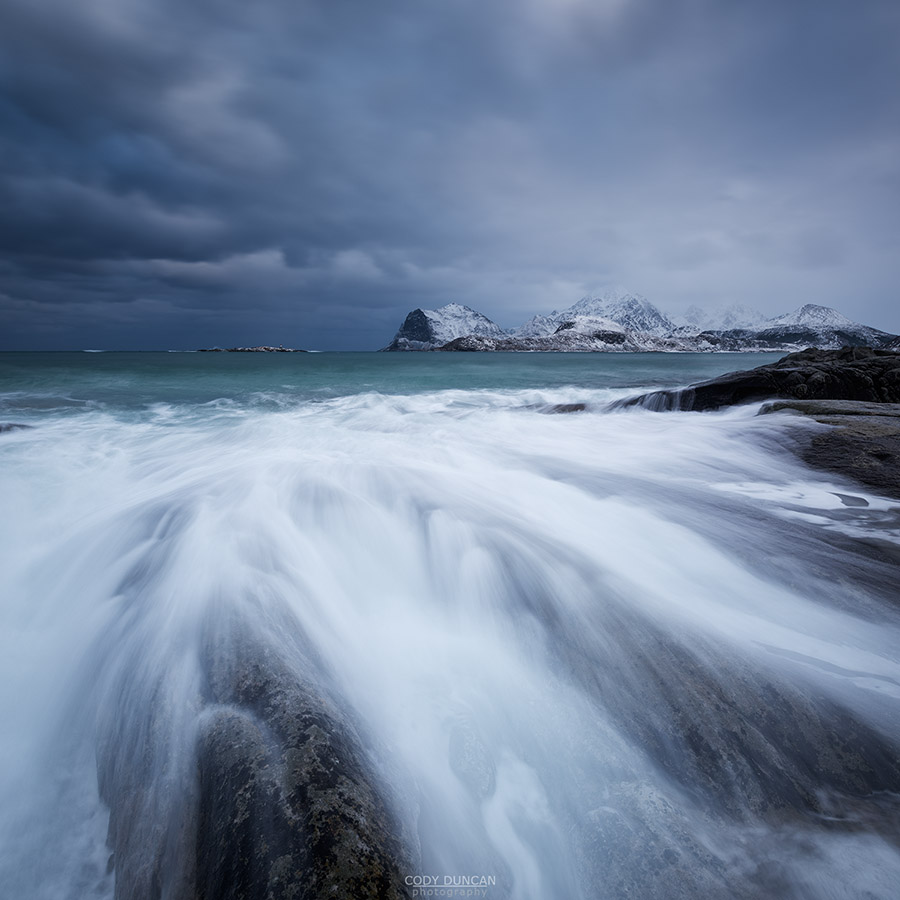 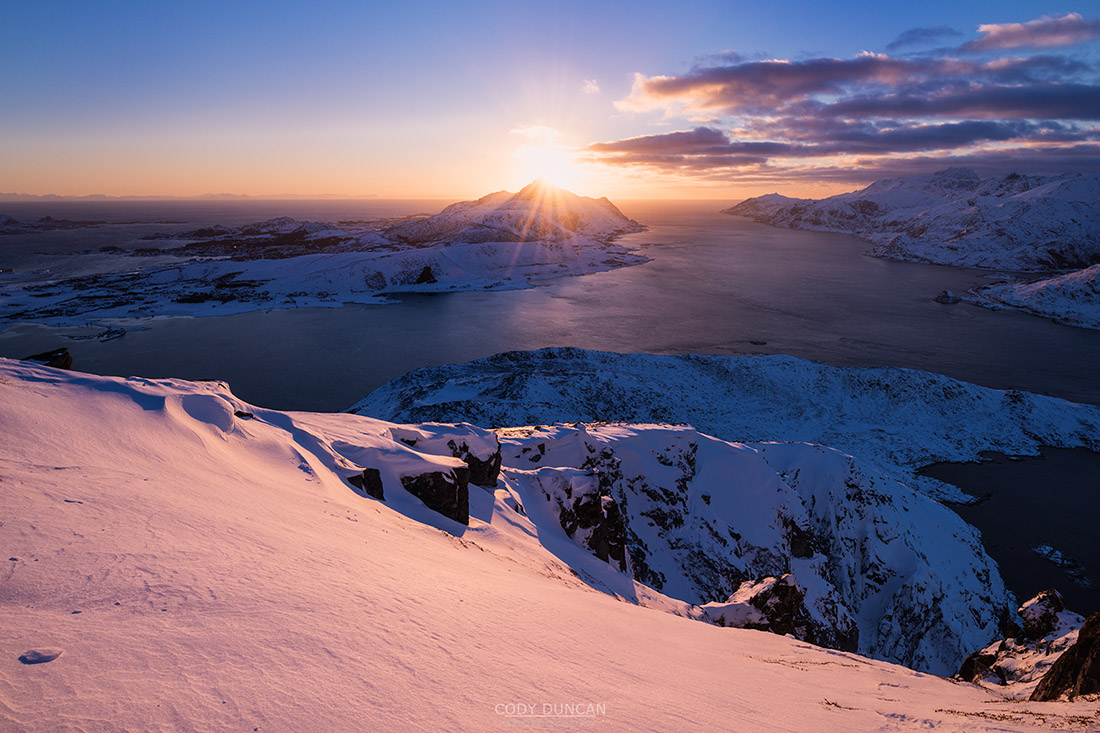 Happy 2016! I’m not quite sure where 2015 went, probably because I spent most of my time behind the computer writing 3 ebooks on Lofoten, but the new year is here. I have some big plans for the year, which if I can manage, should result in some pretty cool stuff happening on this site and beyond.

Next, this image marks 3 years of Friday Photos! I’m not quite sure how I have done it, and on a few occasions it was sometime late in the night before I thought, ‘Oh crap! it’s Friday!” And then quickly tried to write something. Lately, it has been a bit of a struggle as I put most of my focus on ebooks; I’m not a natural writer, and some weeks I only have so many words in my head, which once used up, I struggle to produce anything more. But I’ll still continue along as best as I can.

For anyone who has purchased one of my ebooks in the last year, thank you! Without your support, I’m not sure what the future of this site might be. I must admit, there are times when I wonder if keeping this site going is still worth it, especially as there are so many new places in the world to discover. It really is hard work to provide so much information…

Now to the photo. A rare, sunny and calm winter day in early 2015. One of the last good days before the weather more or less turned into one endless storm for pretty much the whole of February. Having been dropped off in Leknes and then hitchhiking to Stamsund to pickup my rental car, I had something of a late start to the day. Offersøykammen seemed like the easiest destination to get some decent images without too much effort.

I think it can be written, that the sun barely rises above the horizon in January, but sometimes that is hard to translate visually. A big reason of these Friday Photo posts is to show you what it really looks like. So this is just about as high as the sun reached on January 20, with pink light shining across the snow covered landscape. The day is one long sunrise – sunset. Absolutely fantastic!

PS: There are still a few places available on my winter photo workshop in February, if you’re interested in trying to get to places like this… 🙂