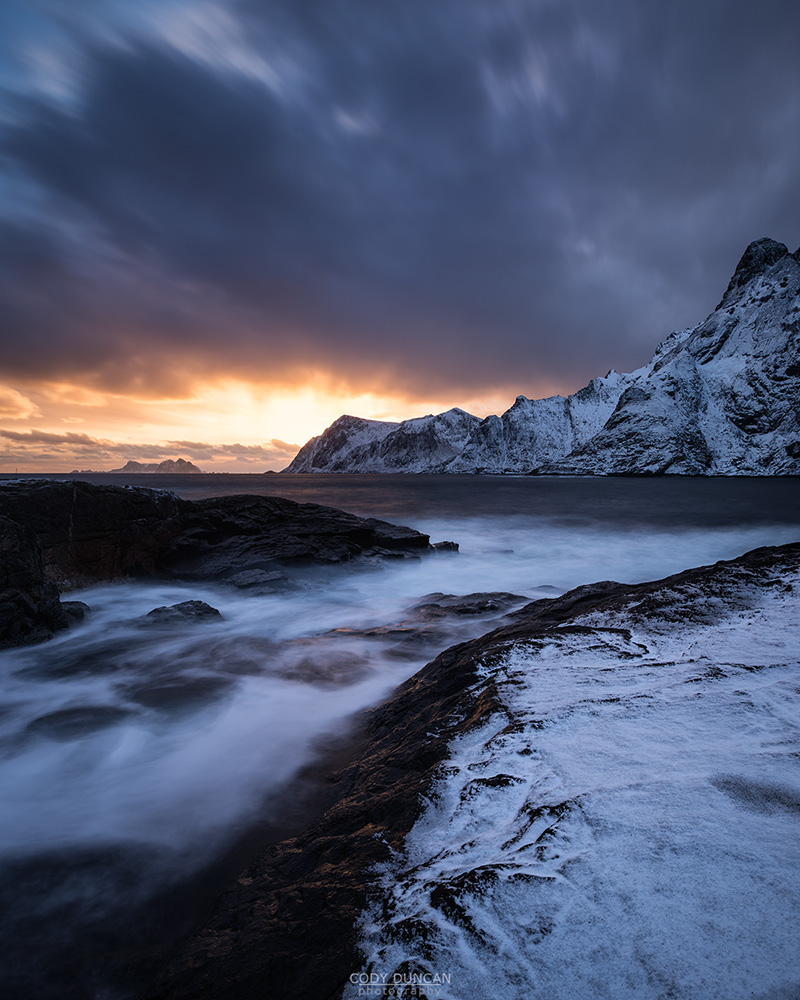 I think I have written many times by now about the cliffs past the village of Å being a good sunset location for a few weeks in winter. If you’ve missed the other times, I’m writing it again. From late January to mid February, the sun sets right around the mountains at the ‘end’ of Lofoten. And with this also being a scenic section of coastline, it is one of my favorite winter sunset locations.

Though I have been here plenty of times before, I did find myself having some compositional challenges on this particular day. The sea was just average, not particularly stormy and not particularly calm. There was also a fresh dusting of snow that I wanted to include in the scene.

After trying several other compositions from higher up on the rocks, which, I would have been happy with were this my first visit, I felt they were missing something. Finally getting closer to the sea, I came upon this view. It was the most dramatic part of the scene, but I think the image has a better balance of the elements, still showing all I wanted to show, but in a much simpler form.

I’m happy to announce 4 new photo and hiking workshops for the summer.

Each workshop focuses on exploring outdoor Lofoten, including hikes to some of my favorite mountain views. And the Distant Beaches tour also includes several days of camping. My goal is to take you beyond the roadside views and into the real Lofoten that I myself have returned to more than 20 times. 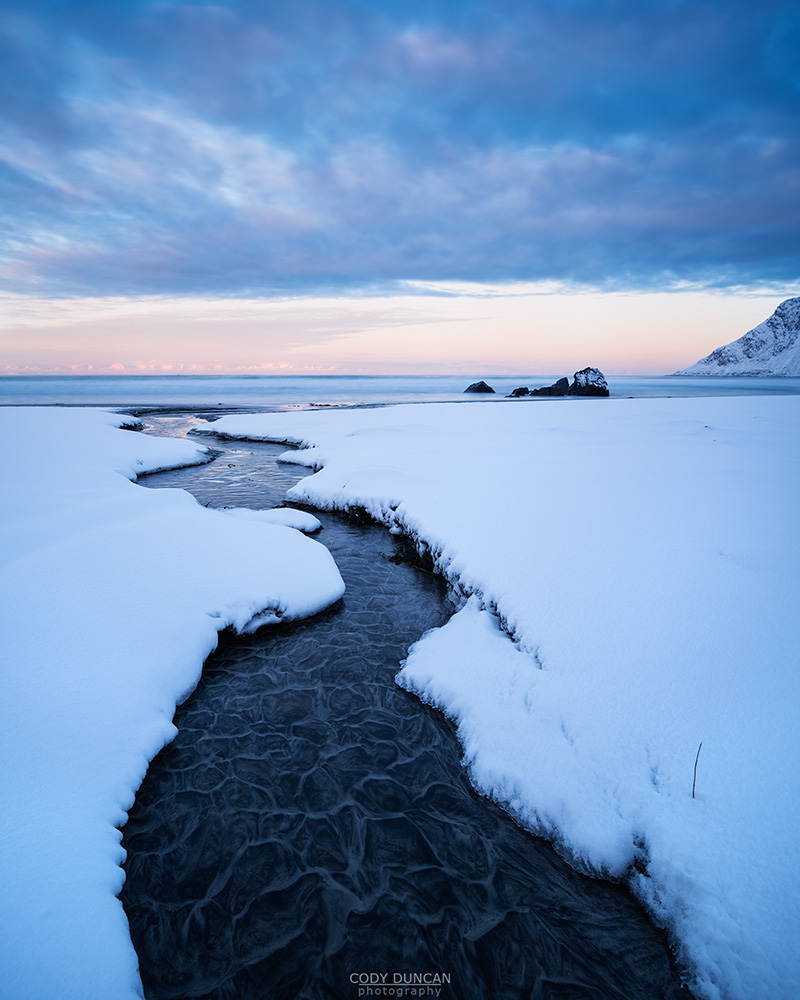 Skagsanden is one of Lofoten’s most popular beaches among photographers these days.  The nice thing about winter is that a light dusting of snow overnight will cover up the traces of everyone who has been there before you.

This soft pastel light is a common occurrence in January as the sun is barely able to rise above the horizon. Instead of focusing on the beach itself, I found this stream running through the snow covered sand to be much more interesting.

The one thing that distracts me is the mountain in the background, I wish the river had been flowing a bit more to the left. But this is nature, and I cannot change things – though some might. Though I think this is a philosophy among landscape photographers who see themselves as the most important element of the image, and want to show what ‘they experienced;’ Whether that reflects what was actually in front of them or not.

Perhaps I lack the confidence to add such a strong vision to my images, and I often think of myself as just a simple observer, seeing if there’s anything interesting to photograph.

One of these years I will come back and things will be as I imagined. Patience… 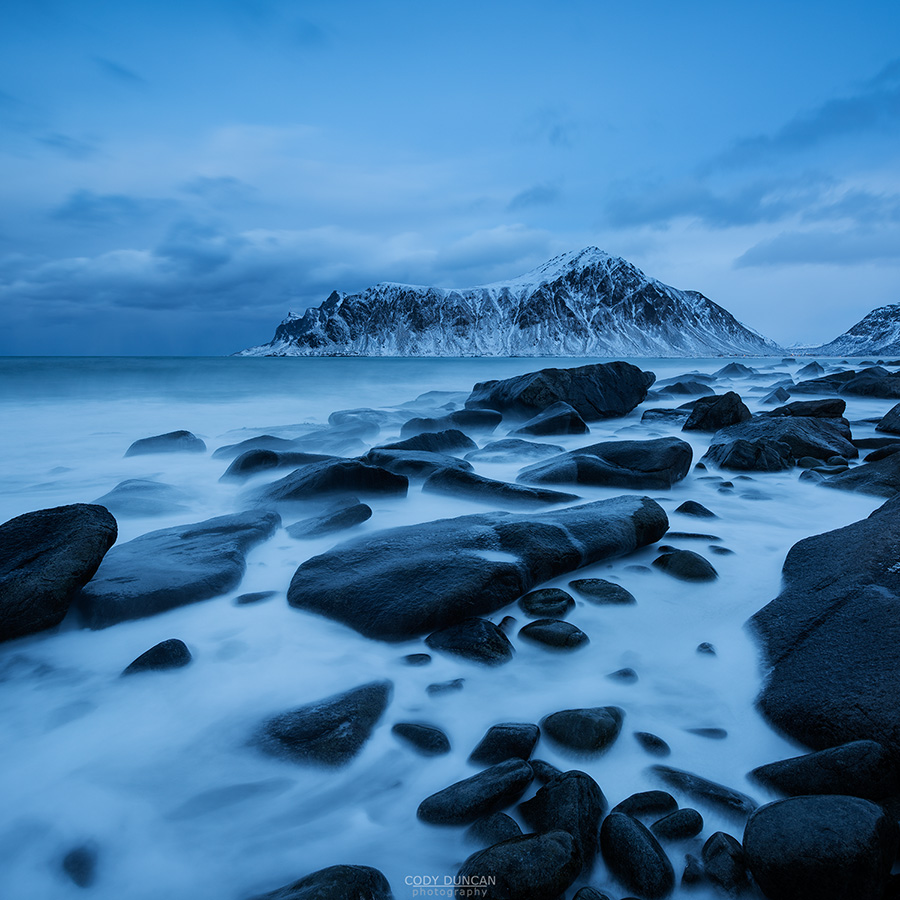 Having already photographed sunset at Å an hour earlier, I was headed east looking for a place to park the car and sleep for the night. As I passed Ramberg, there was still a nice winter blue hour glow to the sky and so not yet ready for dinner, I headed to this section of rocky coastline near Skagsanden beach.

The tide was high and the waves were big enough that I could get a nice view across to Hustinden, rising in the distance.  The color was gone from the islands, but I think the texture and shape of this scene work better as a B&W (blue and white) image. 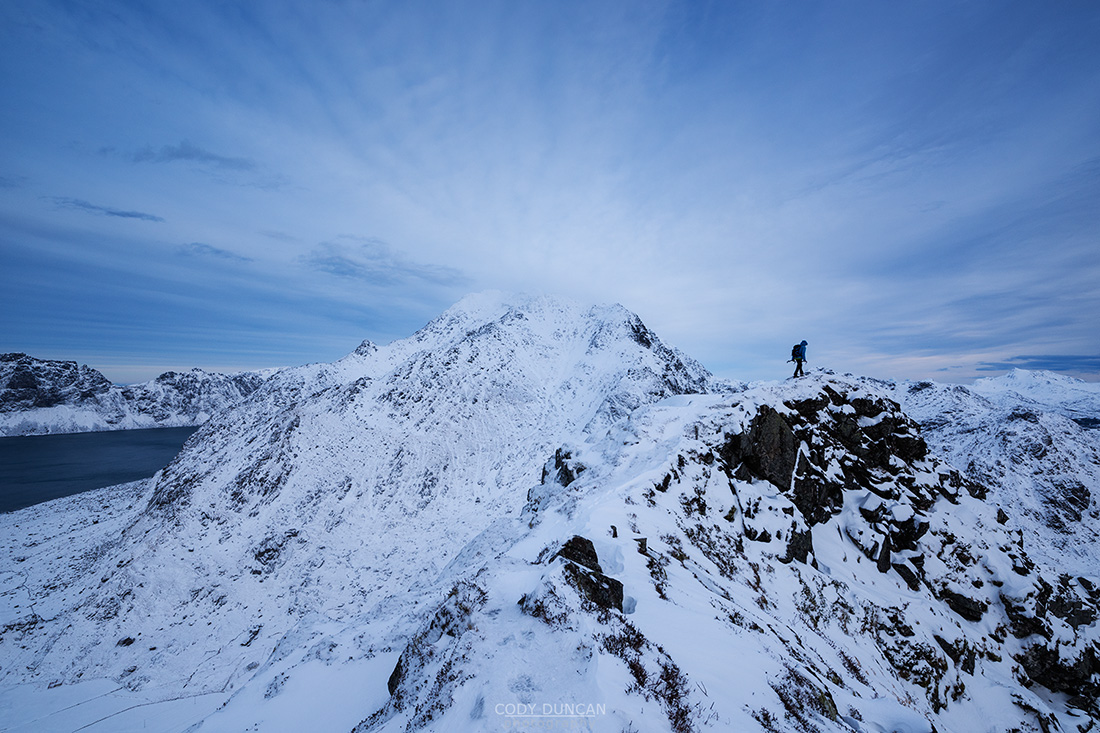 On a cold winter day in February my friend Till and I headed up to the summit of Mannen via a direct route on the south face.  After some time on the summit, the winds were picking up at it was time to head down.  Figuring the route we ascended wouldn’t be too fun to head down, we took the normal tourist trail down from the summit. Although it winter, it is a bit more adventurous that the easy walk of summer.

As I remained on the summit, packing my gear, Till began the descent. Appearing as a lone figure on the ridge, with clouds seeming to radiate from Himmeltindan in the background, I quickly pulled out my camera for a few more images.

Not the best light, but this scene illustrates typical winter conditions in the mountains of Lofoten.