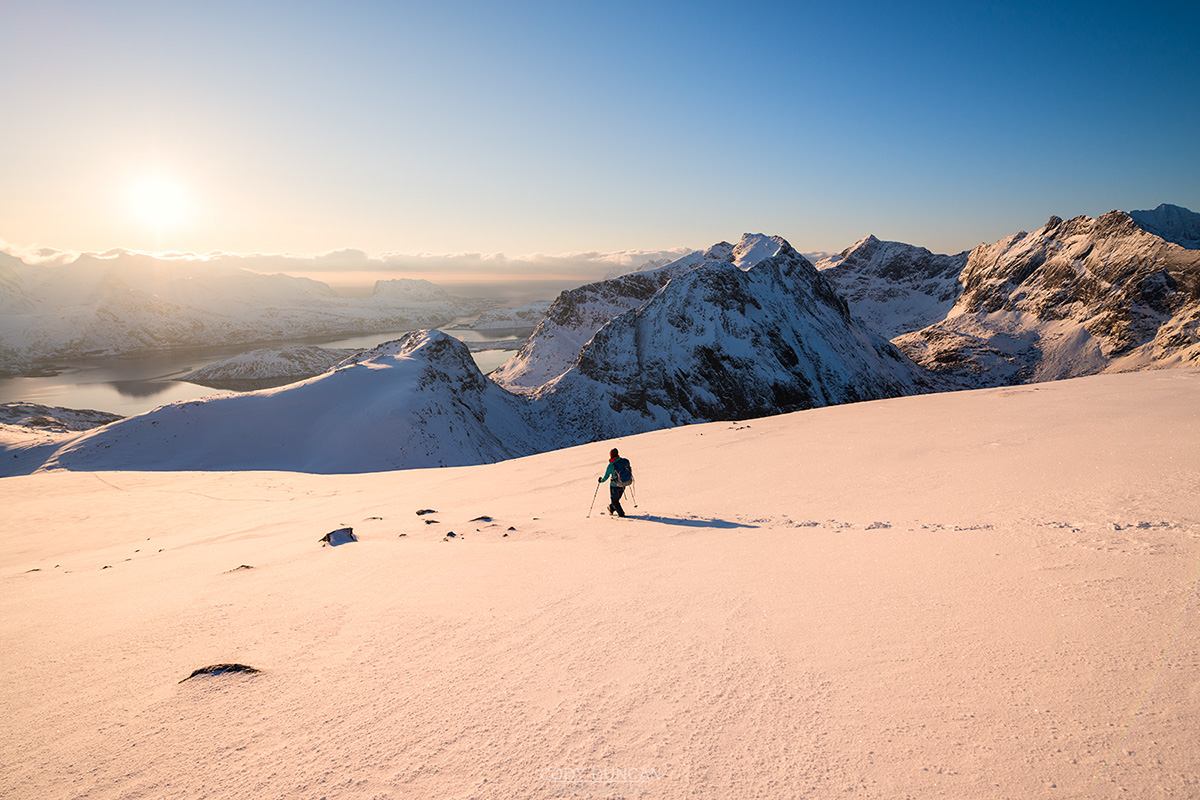 A few days after the full moon came the weather window I was looking for, and so I made plans to camp on the summit of Ryten for the night, with hopes of a sky full of northern lights above the moonlit landscape. I had attempted this same plan in January 2015, however the weather had other plans and we were chased off the mountain, so I was excited for a 2nd chance with promising conditions.

It was eerily calm on the summit and even with the tent haphazardly staked out, it didn’t budge an inch. But even on a calm, clear night, no sign of northern lights appeared. So it looks like I will have to make another attempt next year.

However, it is always important to make the best of any situation, and while I was really hoping for auroras, there was plenty of other nice light to be found during sunset and sunrise at one of Lofoten’s most scenic destinations.

If you are interested in joining me for winter or summer adventures across Lofoten, checkout my TOURS page to see what I have on offer…

Summer is when the Lofoten Islands are most alive. So I invite you to join me and experience the magic of the midnight sun while exploring some of Lofoten’s most iconic mountain views. We will hike through flower filled meadows on our way to views of white sand beaches and azure waters – so inviting that the bravest of you might even attempt a swim!

The goal of this workshop is to experience the magic of the midnight sun while hiking to some of Lofoten’s most iconic mountain views. Along the way, instruction will be given on how to compose and photograph a variety of mountain scenes, as well as learning about efficient packing and choosing the right gear for the right destination. 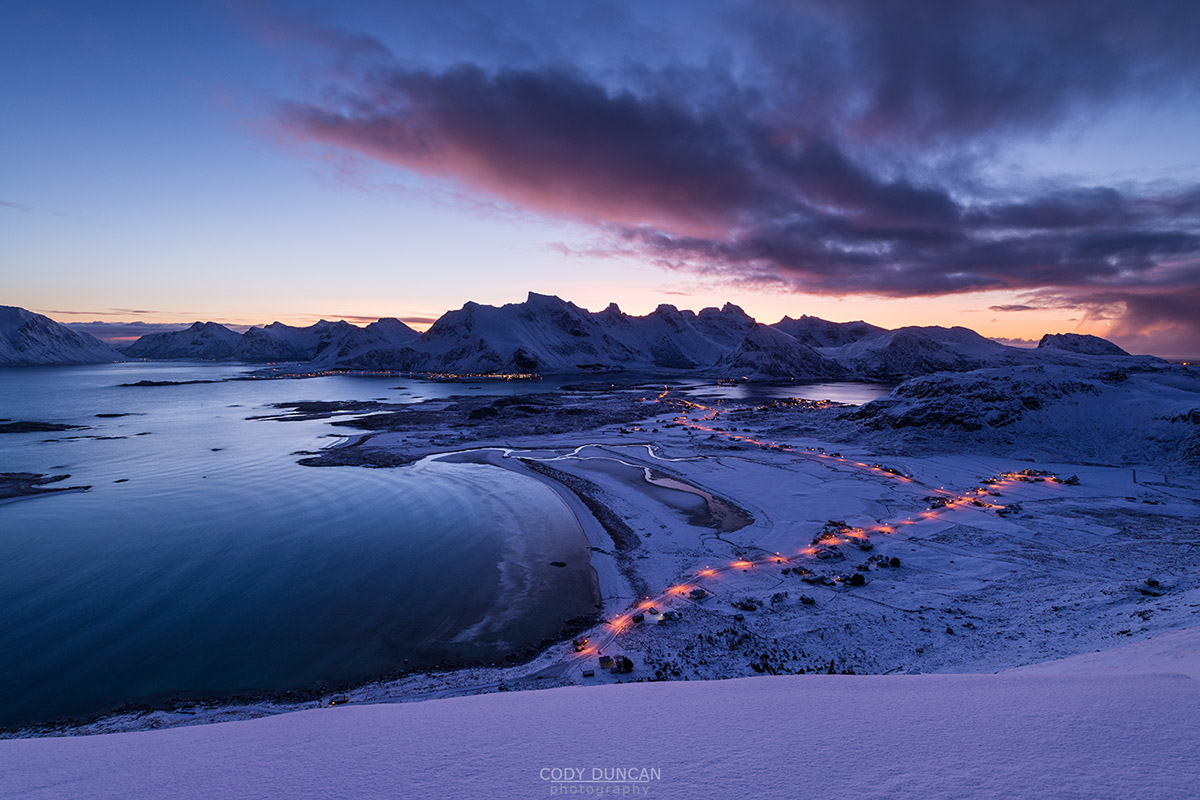 My first morning waking up on Lofoten during my 2016 winter travels. Not a bad way to start a trip! And this was even after northern lights over my tent at 3:00 in the morning.

The forecast was promising, but as we were making the way up to Ytresandheia in the last hours of daylight on the previous afternoon, the weather was still moody and wind driven flurries of passing snow even made us briefly take shelter and contemplate heading back down. It’s a good think we didn’t!

The night brought continual passing waves of snow, but the wind had calmed substantially, and by dawn, the first light of day brought an almost complete silence to the landscape.  This scene is still a couple hours before the sun would rise above the distant mountains of Flakstadøy. And a productive couple of hours it was… 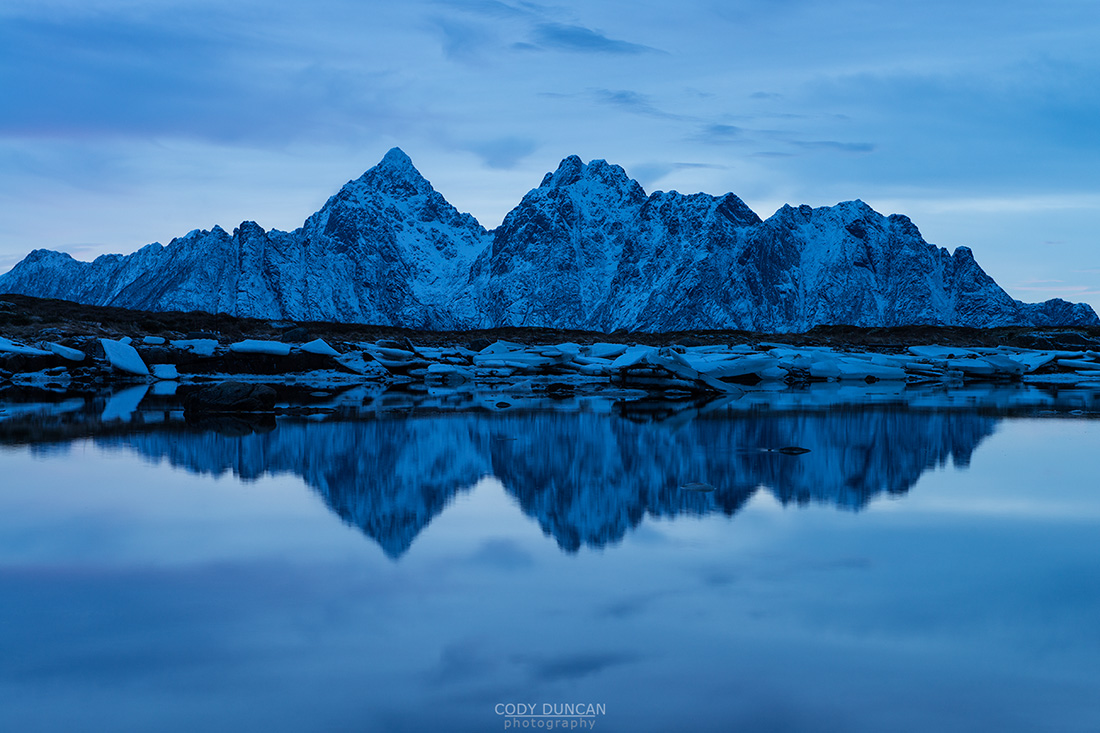 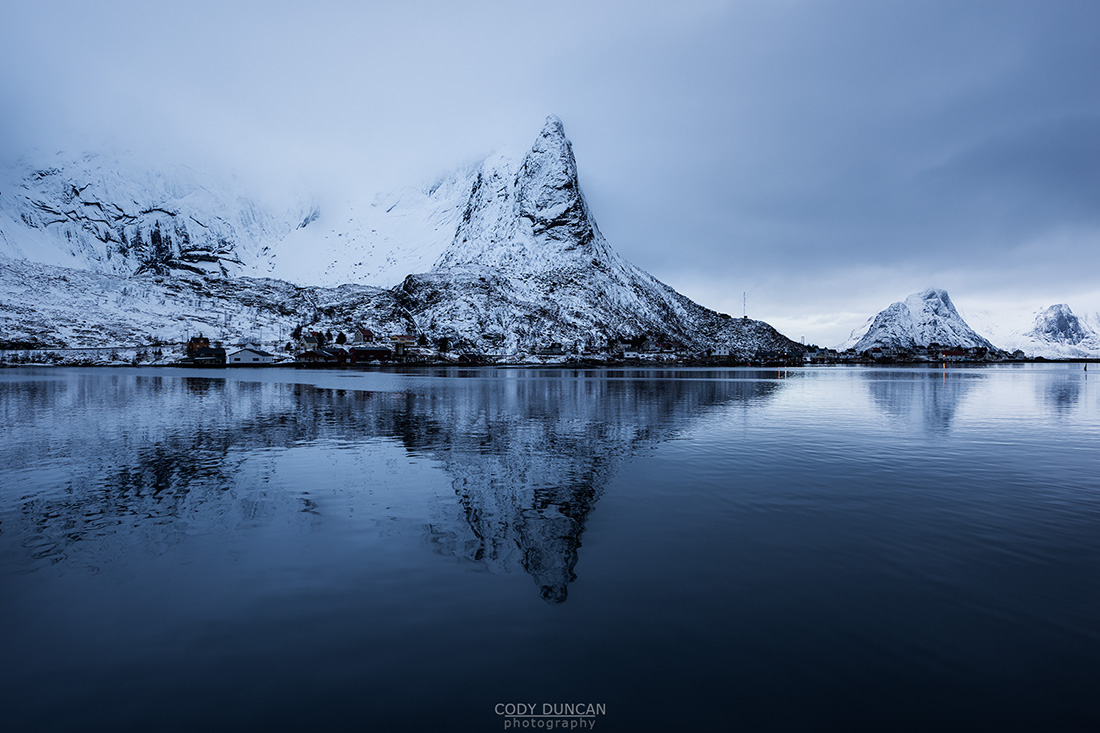 The weather forecast was promising enough to make me think 2 nights camping at Bunes beach would be a good idea. Standing around the pier in Reine, while waiting on the ferry departure to Vindstad, the weather looked like it might have other plans in mind.

Standing on the Pier, the harbor and fjord were almost perfectly still. As the Fjordkyss warmed up her engine, I took a couple last images.  I liked how just the peak of Hammarskafted was clear of the clouds, the rest of the ridge hidden in mist. It makes the peak look like a lone tower, rising above the village. 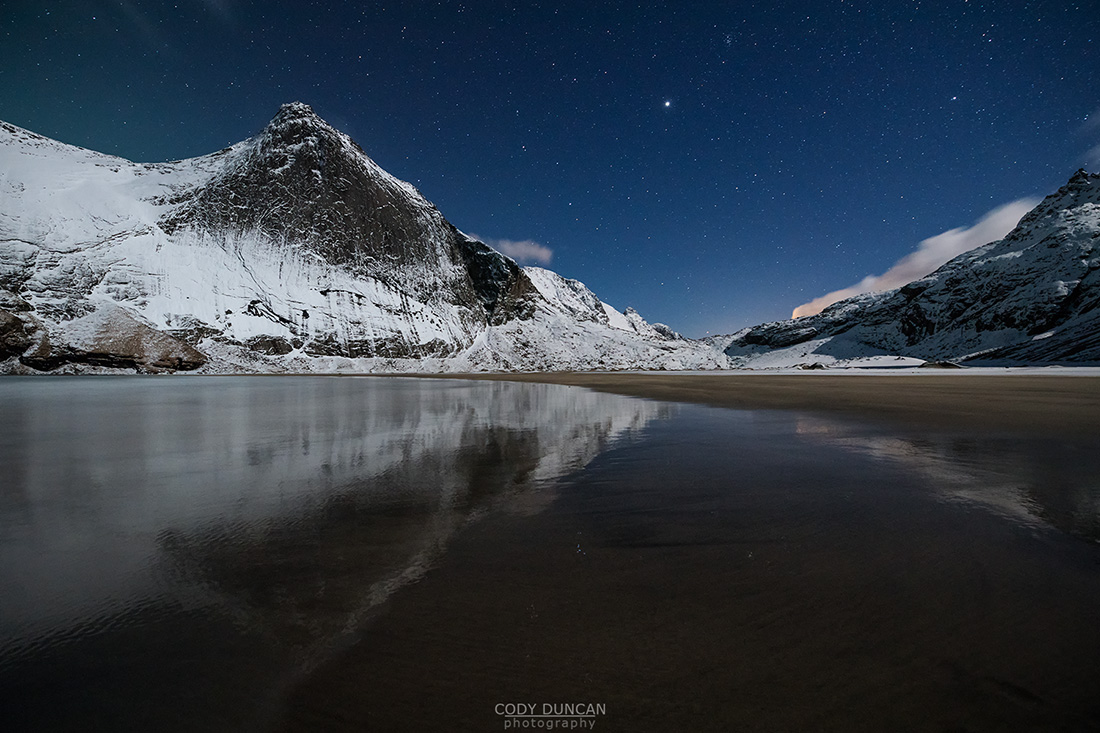 False aurora alarm during my second night camping at Bunes beach.  There had been a faint green glow which stirred us from the warmth of out sleeping bags to head out to the headlands beyond the beach, with better views across the sea. But alas, it would not be our night, and after an hour of waiting in the cold and wind, we decided to give up.

The moon, however, was shining bright across the snow covered land landscape.  I had taken nearly this exact same image only a few hours before at twilight, and now I decided to make a night version.

After Olstind, Helvetestind must be one of the most iconic mountains on Lofoten. A 600 meter, nearly vertical chunk of solid granite rising from the sands of Bunes beach. It is an impressive peak to stand below, with a scale that is hard to capture in an image. It’s only due to its location at Bunes beach – and hour walk from where the ferry drops you off, that it doesn’t get photographed more. Were this scene near a road, it would, no doubt, be one of Lofoten’s most photographed. Though it’s good that some places in the world at least require a minimal amount of effort to be reached.