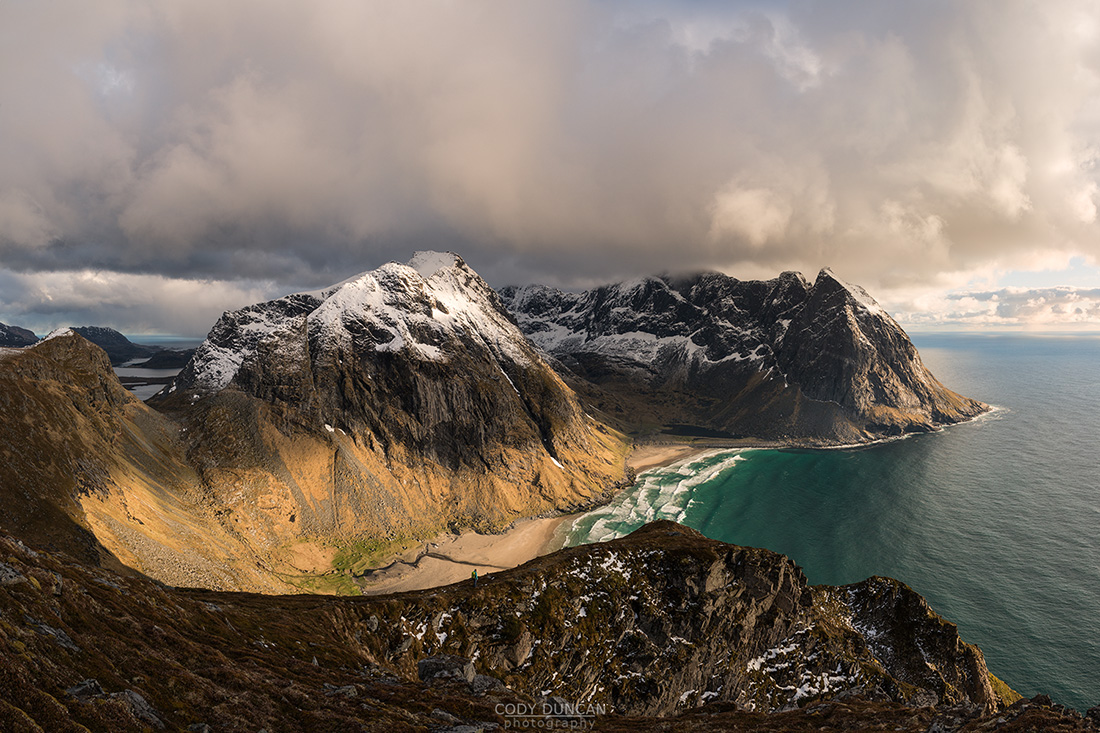 May is the month of melting snow and the arrival of the midnight sun over Lofoten. Yet even in the near endless days, winter doesn’t always easily give up its grip over the islands, as experienced on this cold evening on Ryten, with knee deep snow which had fallen over the previous 2-3 days across the higher elevations of the islands. A couple days later, all was gone again.

Even with the sun in the sky for 24 hours as it begins today, the sun’s location in the sky is still an important element while photographing the islands. In my Seasons on Lofoten – Winter eBook I have gone into some detail about the movement of the winter sun and its influence on when to photograph certain locations, so perhaps in the coming days of summer, I will begin to write a bit more about the midnight sun.

Kvalvika beach as viewed from Ryten is a perfect example of this. Even though the sun might not set below the horizon and this sounds like a good location to watch the midnight sun, the beach actually receives the best light, shining directly into the bay, from about 19:00 – 23:00. When the sun reaches its low point on the horizon around 01:00, the beach will be left in shadow, due to the mountains shadowing it from the north.

So, if you’re planning to head up to Ryten for ‘sunset,’ go up a few hours earlier to get the light across the beach as well. 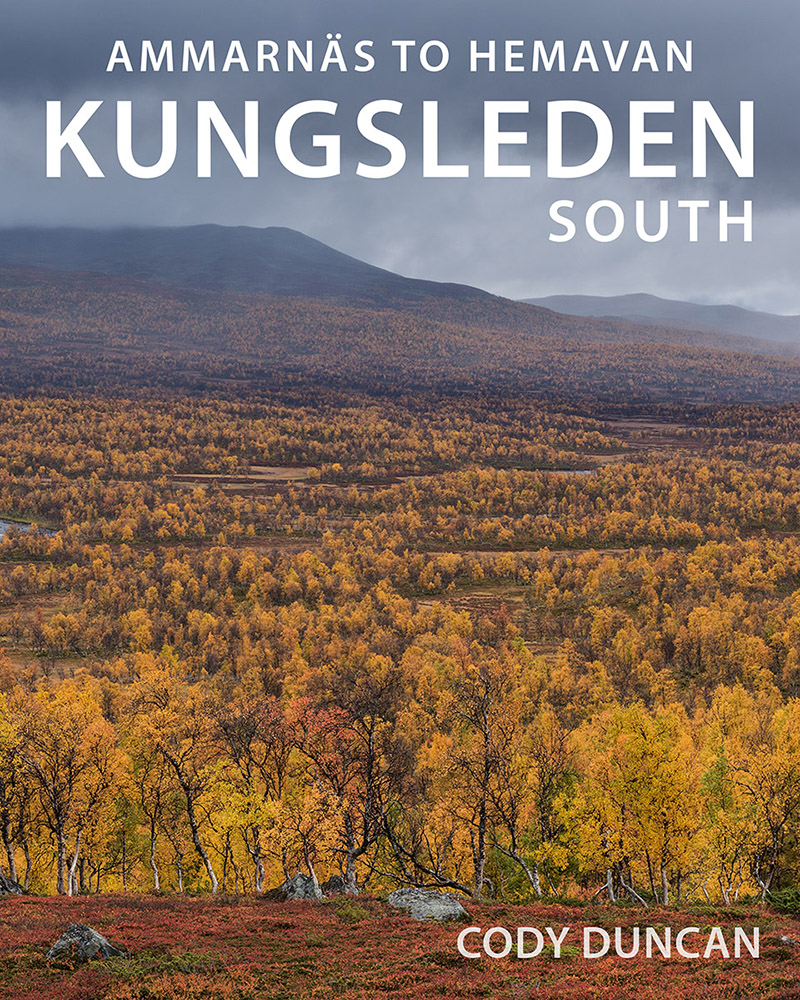 I’m super proud to announce that my 5th ebook has been released: Kungsleden South.

Following on from my previous Kungsleden North ebook, Kungsleden South is a hiking guide to the southernmost section of Sweden’s Kungsleden trail – from Ammarnäs to Hemavan. 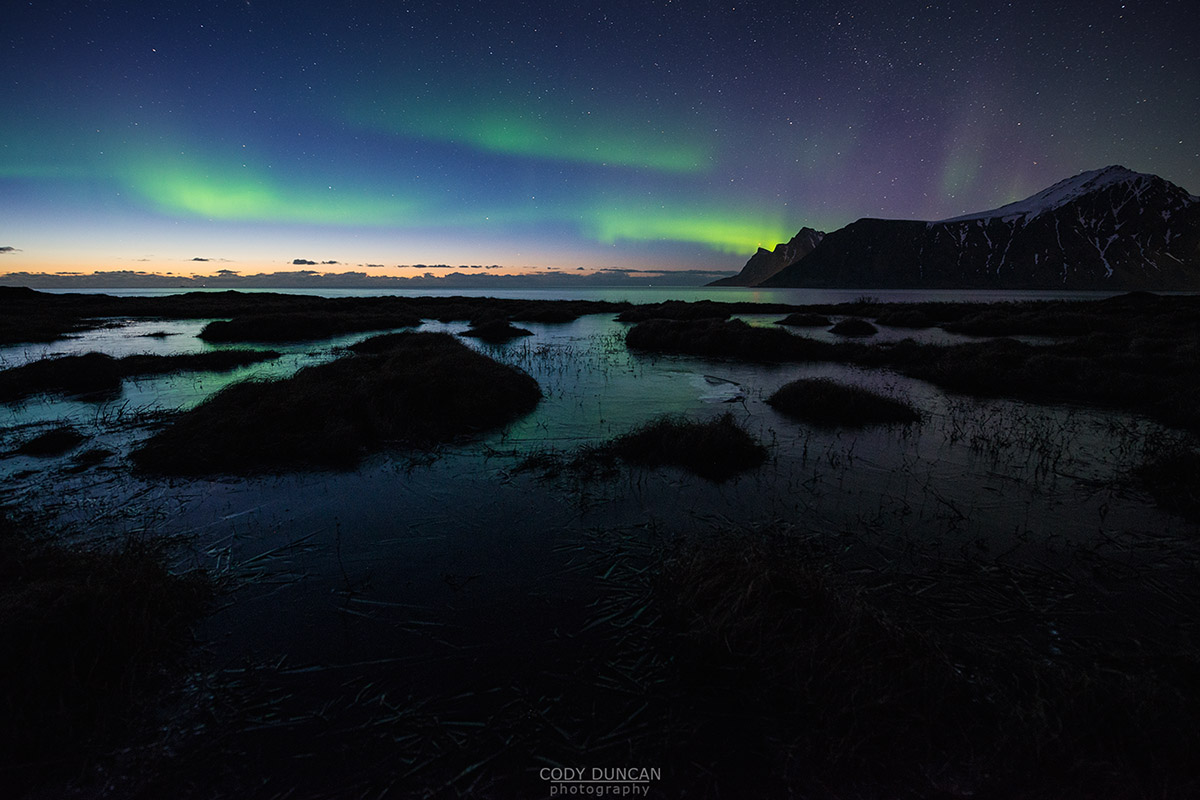 The end of August brings the last days of summer to Lofoten. This is a period of transition, where a hint of autumn color can be seen across the land while the growing nights still have a faint glow in the northern horizon. The weather can become turbulent and yet summer still is still here, keeping the islands open for exploration. And if we are lucky, the first hints of northern lights might make an appearance in the midnight sky.

Come join me on this exploration of Lofoten. We will chase the light and storms along the coast and take advantage of any fair weather to head up to some nearby peaks, for world class views across hidden beaches and distant mountains. We may even decide to ‘stay up’ for sunrise, while enjoying a campfire and bbq at a scenic seaside location. 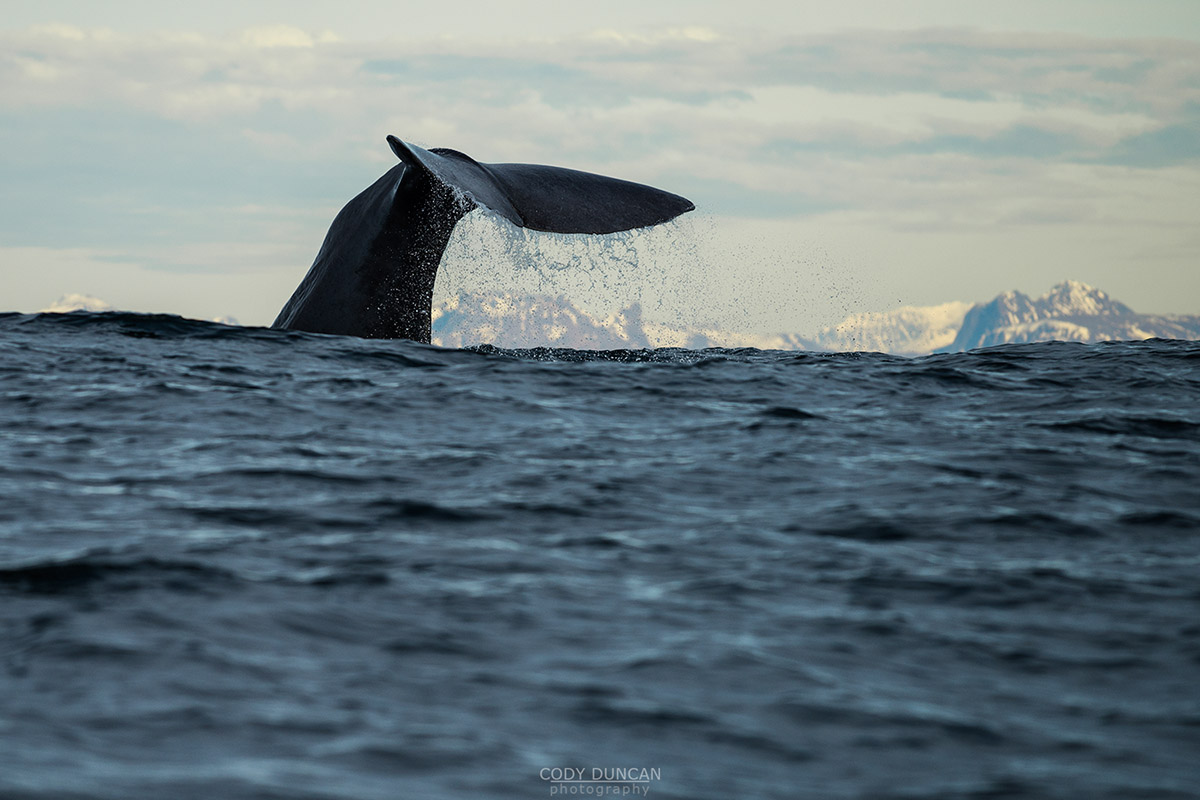 With the sun setting just below the horizon each night, the end of July brings the twilight nights to Lofoten. No longer the midnight sun, and not yet dark, the ‘night’ is one long transition from sunset to sunrise. We will use these long days and glowing nights to explore and camp in some of Lofoten’s best destinations.

This Photography workshop is more than just a tour of Lofoten, it will be a total outdoor experience of the Islands. The heart of this trip will consist of a 4 day – 3 night hiking and camping tour across the wild northern coast of Moskenesøy, where we will take turns watching the sun sink into the sea from sandy beaches and mountain summits. 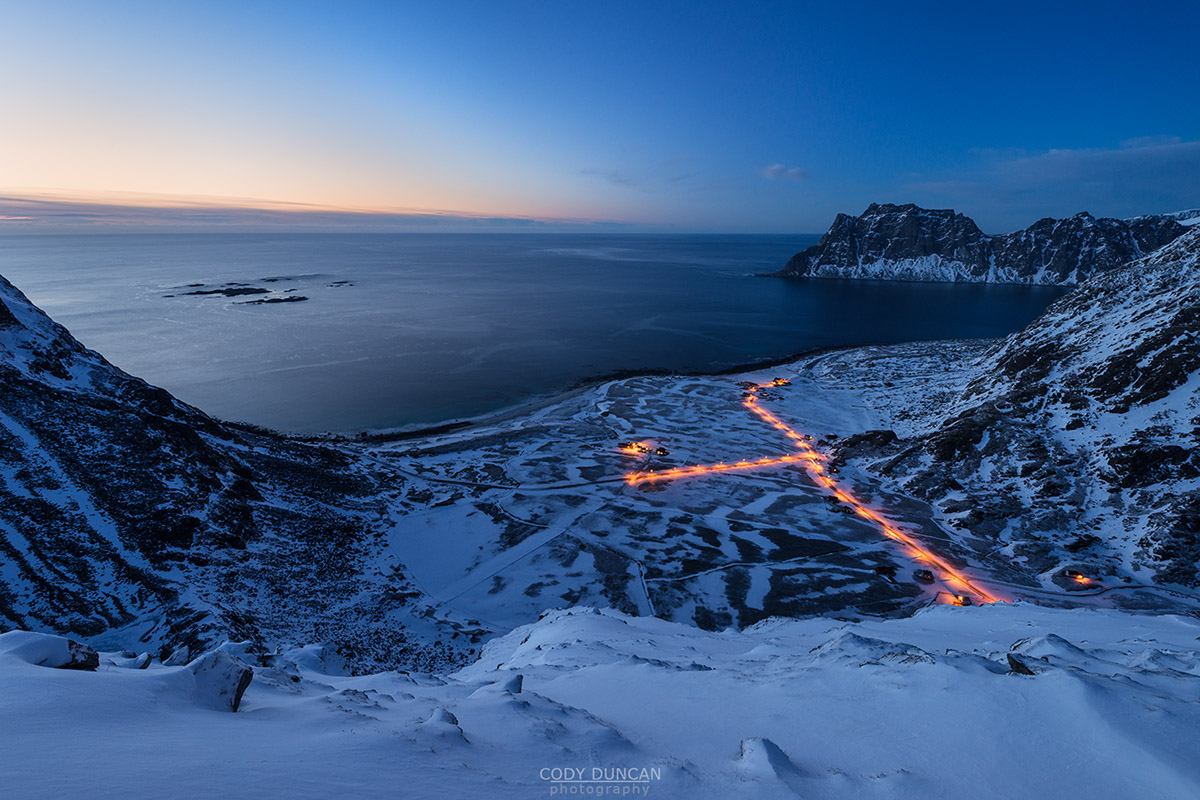 We will become nocturnal on this workshop and time will cease to be of much importance. Our goal is to hike to scenic mountain views and photograph the hours-long sunset to sunrise which occurs around midnight. And when our legs are tired, we might pick up a grill and spend an evening around a bbq and campfire with our cameras shooting time-lapses down by the sea.

After the success guiding their 2015 Lofoten Photo workshop, I will once again be guiding for Muench workshops alongside Andy Williams for their 2017 Lofoten and Vesterålen photography workshop.

The tour begins on Lofoten, where we will focus on capturing the winter landscapes and, if we’re lucky, nights full of northern lights. We will first be based on Sakrisøy, near Reine, to focus on the western parts of the Islands, with the iconic peak Olstind just out the front door. Next we will travel to Leknes, so we can be near the fantastic beaches of Vestvågøy.

After Lofoten, we will drive several hours north to Andenes on Vesterålen. Here, we will take to the sea on private rib boats for two days of whale watching in the dramatic winter light.