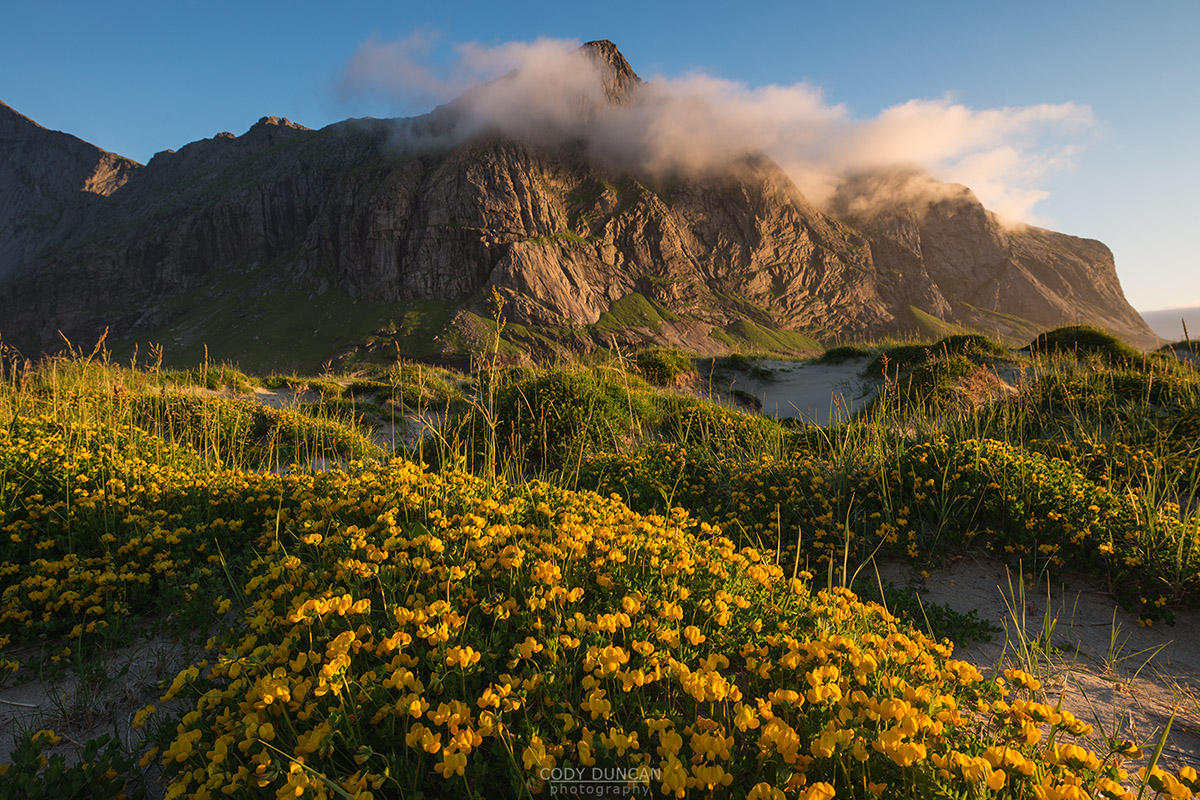 Since moving to Lofoten in the spring, I haven’t actually gotten many camping trips in so far. Mostly it is because the need is lost when I can just return home at 03:00 in the morning after sitting on a mountain for the best light of the midnight sun hours, so why carry a heavier backpack than necessary?

So I was quite happy when clients on a private tour in mid July wanted to spend a night in the wilderness of Lofoten, for their first ever night in a tent. I knew Horseid beach, as one of Lofoten’s most scenic locations would be the perfect spot! Now the only thing that needed to cooperate was the weather, which presented itself as heavy, low clouds for the first 2 nights (of 4 total) for the tour. However, on day 3 the forecast looked promising, so I knew this would be our only shot.

Getting on the ferry, I became a bit worried at the huge crowds standing on the pier in Reine. Fortunately, almost all where headed to Vindstad and Bunes beach, with only a few others departing in Kierkefjord for Horseid. Horseid is a nice location as the hike is long enough to thin out the crowds a bit – making it almost impossible for a day trip – yet still relatively easy for first time campers.

Arriving in late afternoon, the sun was shining and the light was fantastic, with layers of clouds rolling of the peaks as a north wind blew in from the sea. Later in the evening, I noticed the beginnings of a fog bank beginning to roll in so I quickly ran up a nearby hill earlier than expected, worried that the sun might get covered. Luckily though, the fog seemed to remain in place, and a nice golden evening light shined across the beach.

On the way down from the hill, I wandered my way through the dunes on the edge of the beach which where completely covered in yellow wildflowers at full bloom. The mountain peak in the distance was in and out of the clouds as they blew by, but I found what I thought would make a nice ‘summer of Lofoten’ type image and waited for the summit to emerge. 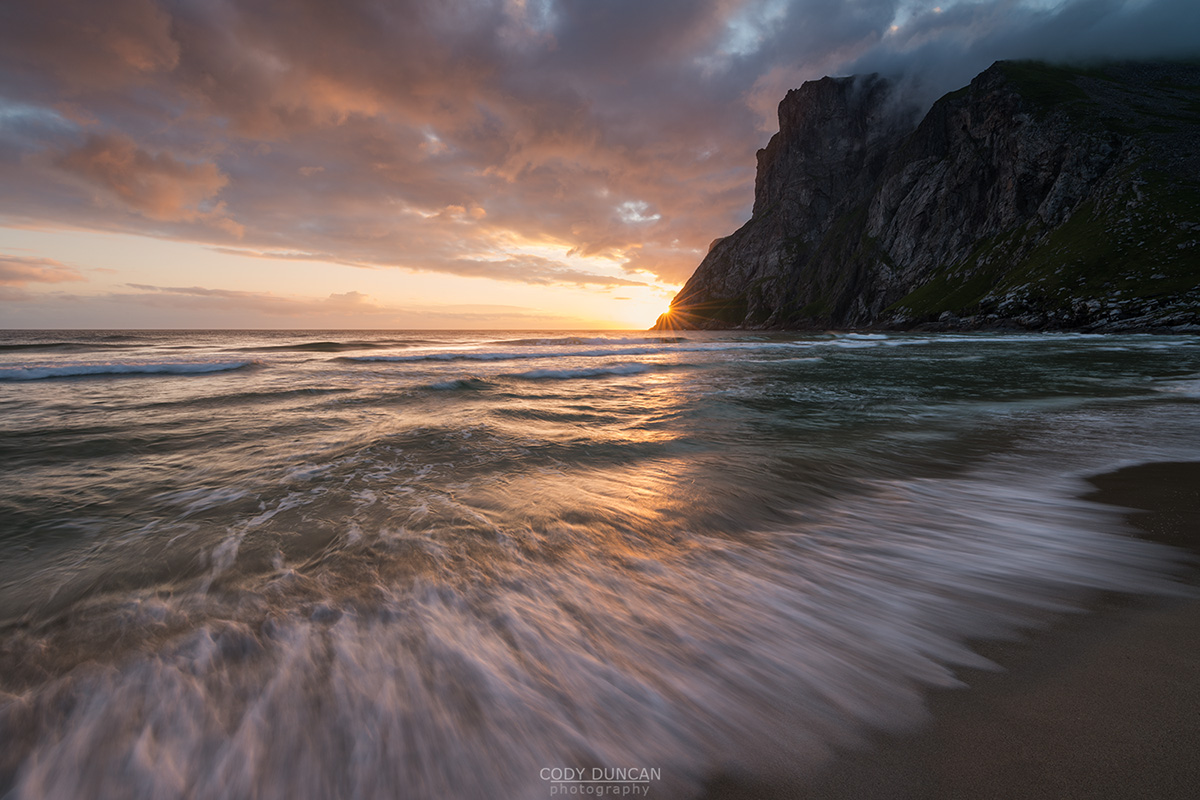 Having hiked two mountains over the previous days during my Midnight Mountains photo workshop in early July, and with high winds and low clouds over the mountains, conditions lead us to a more relaxing evening at Kvalvika beach.

Arriving around 21:00, we had a couple hours to photograph the golden light shining across the bay before tired legs lead us to a nice place on the grass to rest and soak up the sun’s warmth. However, as time passes, one needs to relocate further west across the beach as the cliffs of Ryten cast the beach in Shadow.

Finally, near midnight, with the sun low on the horizon, the light is just about to leave the main beach as it hangs low over the sea in the northern sky. Wanting to get a little movement out of the sea (and not having any ND filters available for my 14-24mm lens), I stopped down to f18 to get just a bit of blur on the incoming waves.

In dynamic situations like this, I was bracketing between 2 exposures ( – 2/3 for sky), just to make sure I had all the info on my sensor to edit once home. And with the dynamic nature of the waves, it is best to overshoot as it is difficult to know exactly how things will end up – edit and delete once the light is gone. Every minute or so I would have to relocate my position as the sun disappeared behind the mountain until it was finally gone from the beach.

And of course, at a location like this, don’t forget to turn around and shoot what the sun is illuminating. Maybe that will be next weeks photo. 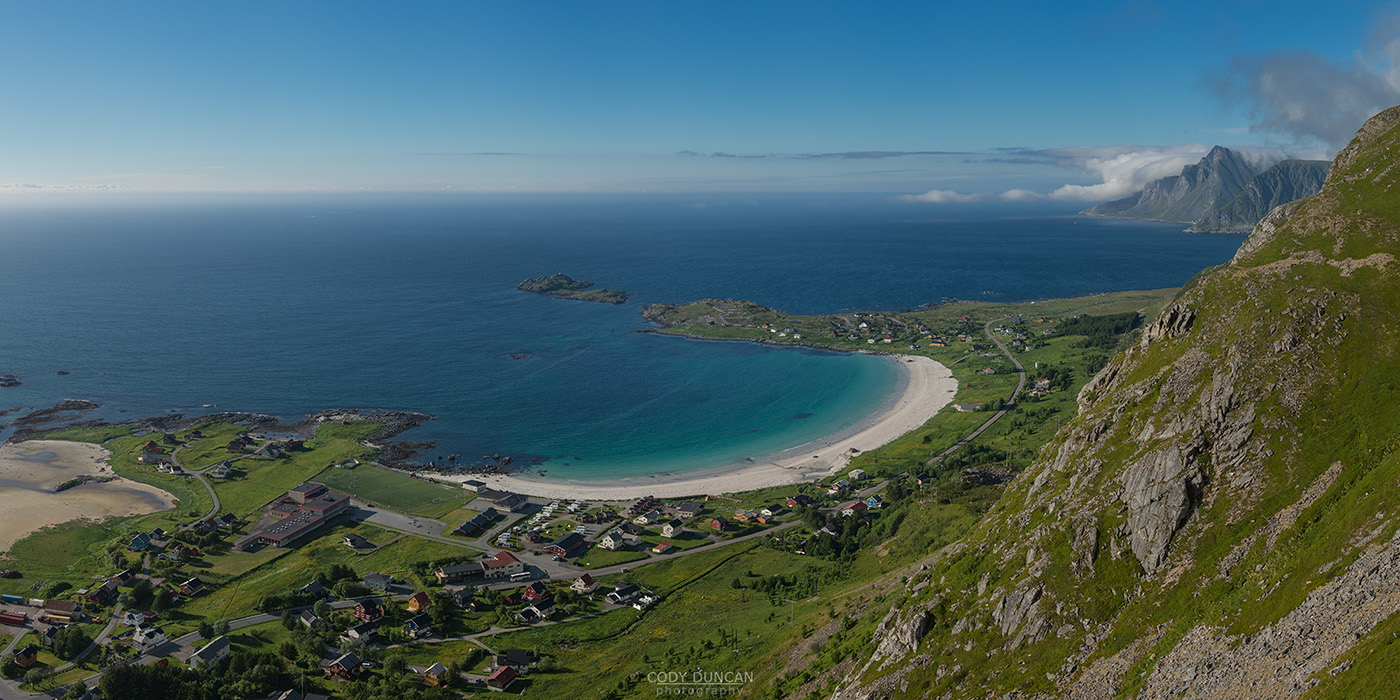 I’m slowly working on my next Lofoten ebook, and the view from Nubben, will be part of it. A small rock outcropping rising above Ramberg, there are fantastic views over Ramberg beach – also if you hike out to the edge of the mountain on the right side of the photo.

I would not label myself a typical landscape photographer, who typically only shoots in dramatic light with the sun low on the horizon. I like to shoot everything! And sometimes, a summer day is just a nice time to be out, it needs a clear blue sky and bright light. I often label these days ‘too good for photos days.’ Days when it’s simply enough to sit outside and enjoy the weather, and maybe get a little sunburn in the 24 hours of daylight.

For this site, I think it’s important to show some ‘normal’ sides of Lofoten. Too often I get shown examples of once-in-a-decade lighting conditions, with the person wondering when they can shoot such photos. It creates a bit of an unrealistic goal for someone to achieve in a week, much less a couple of day, which could very well rain the whole time!

For this image, I really should have been up the mountain a bit earlier – the clouds were slow to burn off.  The sun is just off camera to the left in this scene. It works okay here, however, as I headed out to the edge of the hill, forcing me to shoot more left, any decent compositions became too backlit, with the sun in the corner of the frame. One of two hours earlier would have been better in this particular case

The first workshop is a cool road trip from Lofoten to Tromsø via Senja. This is from October 5 – 10, 2016. Not a standard photo tour, we’ll use camper vans from Acrtic Campers as our portable homes for the trip, giving us ultimate flexibility to chase the best autumn light.

The second workshop is an winter photo tour on Lofoten. March 10 – 16, 2017. Based around the last full moon of the winter season, this will give us some nice conditions for photographing the northern lights should they appear.

For information about both workshops, visit my tours page: