There is barely four hours of daylight on Lofoten as the middle of November arrives and passes. Each day feels darker and darker, even with clear skies. Under heavy clouds, in feels as if the world will soon turn to night – which it will.

After a week of heavy winds and rain from multiple passing storms out of the south, the weather finally settled a bit on this day. Though the forecast called for rain my mid afternoon, I took the risk to head east to Gimsøy to hike up a new mountain for me, Persatind.

Starting the hike at noon, I already felt as if we should turn around; that night will soon arrive. But the heavy clouds were responsible for this as we still have a few hours of decent light.  Fresh snow had fallen overnight and as we ascended higher up the mountain a cold wind began to blow.  Following a maze of sheep trails up a steep and snowy ridge, the route finally arrives at the broad plateau of Høgheia – Maybe a good spot for some winter camping later in the season.

Clouds of the approaching snow and rain were slowly drifting in from the south, layers of distant mountains fading into a blueish grey. To the north, a twilight glow warmed the horizon over the distant islands of Vesterålen and the open sea.

After a few minutes on top it was time to descend while we still had some light. In a couple short weeks, once the polar night arrives, I will be thinking of the brightness of this day – light which wont return until the middle of January… 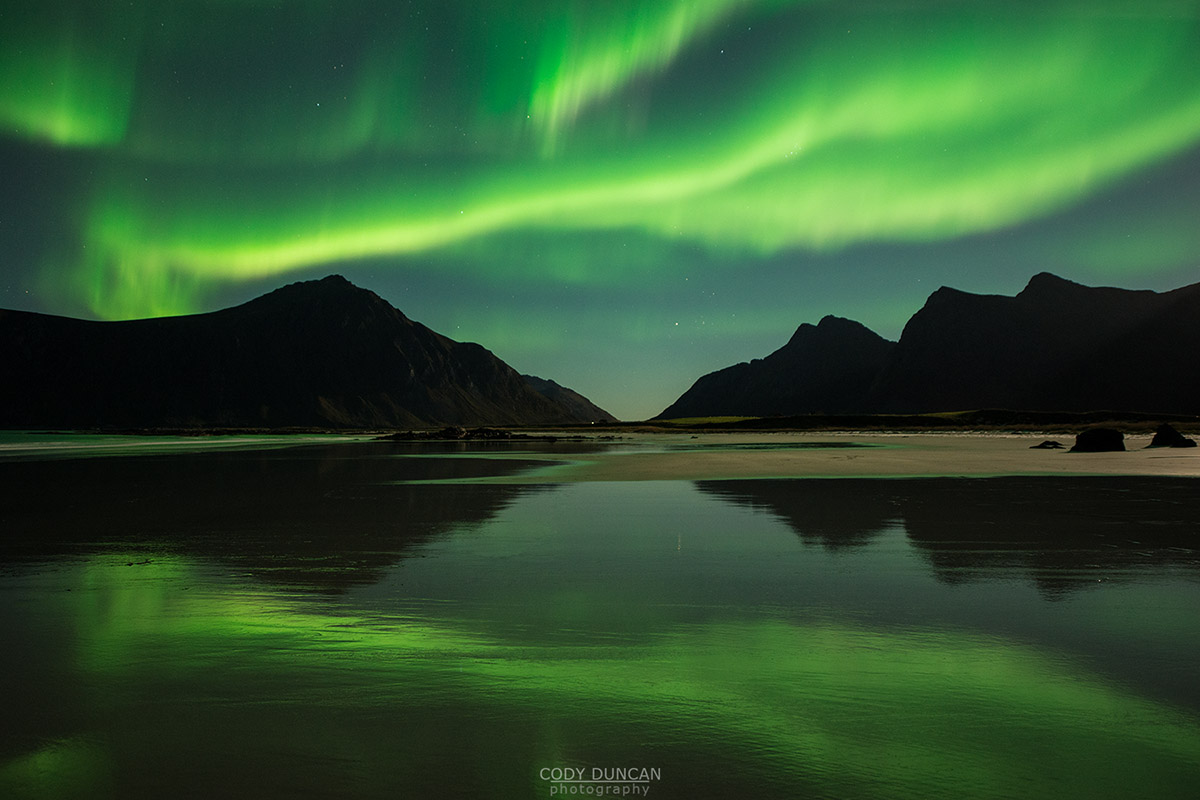 With a full moon rising into the October night, the clear evening sky erupted into a brilliant aurora. I had just finished dinner and looked out the window; seeing a hit of green in the sky, I knew it was time to go!

By the time I arrived at Skagsanden beach, only a five minute drive from my house, the aurora was beginning to pickup. A few minutes later, they sky exploded with color.

The combination of full moon and bright aurora meant I could keep a relatively fast shutter speed and low ISO, yet still maintain enough detail in both the sky and foreground.

In the coming winter months, this will be one of the most photographed beaches for northern lights, with lines of tripods setup across the beach. So it is a bit peaceful to have the place to myself during the late days of autumn, when the islands are still and quiet. 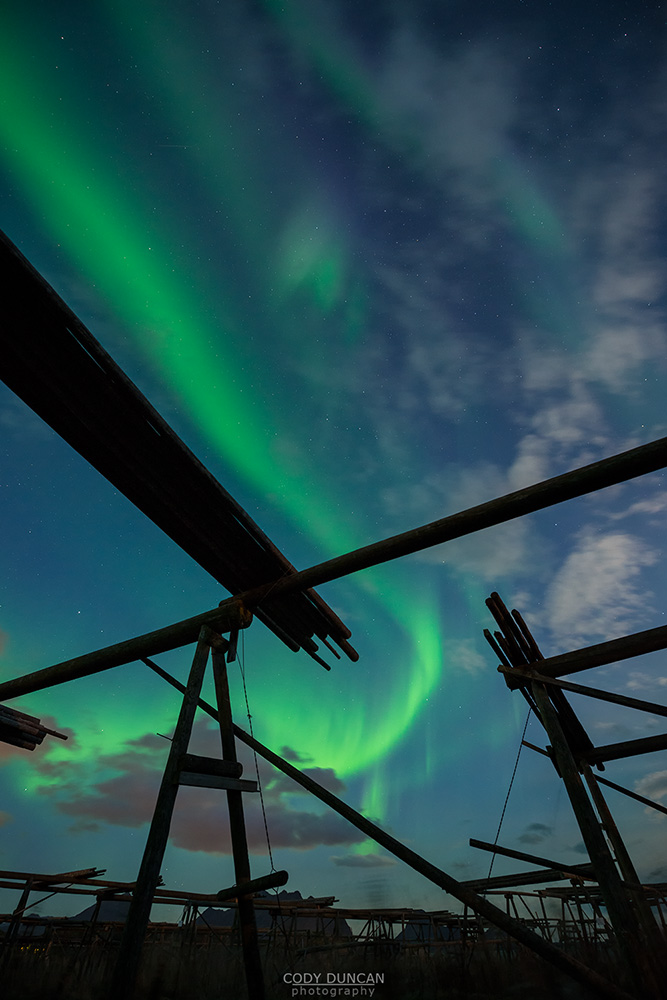 I was on my way to Ballstad in the late afternoon yesterday to drop off a friend after some hiking and a bit of shopping in Leknes. The sun is setting early these days, but the sky was still relatively bright; additionally with the full moon only a few days away. Casually looking out my window at the countryside, I noticed a streak of green in the sky, it was barely past 16:30. So early!

Luckily, since I had been hiking earlier, I happened to have my camera with me, the previous day I missed a fantastic sunset while heading to the climbing gym without my camera. Though I’m unfamiliar with Ballstad, and would have preferred to be at a beach or mountain location, I knew the nearby cod racks could make a decent foreground element and more importantly, help hide some of the surrounding city lights.

I photographed a few different compositions that I liked, and several featuring the moon. Yet, pure luck let the aurora to almost perfectly align with the cod racks for a few moments for an image that looks like I put more more effort into than I actually did. After a few minutes the clouds rolled in and the show was mostly over. 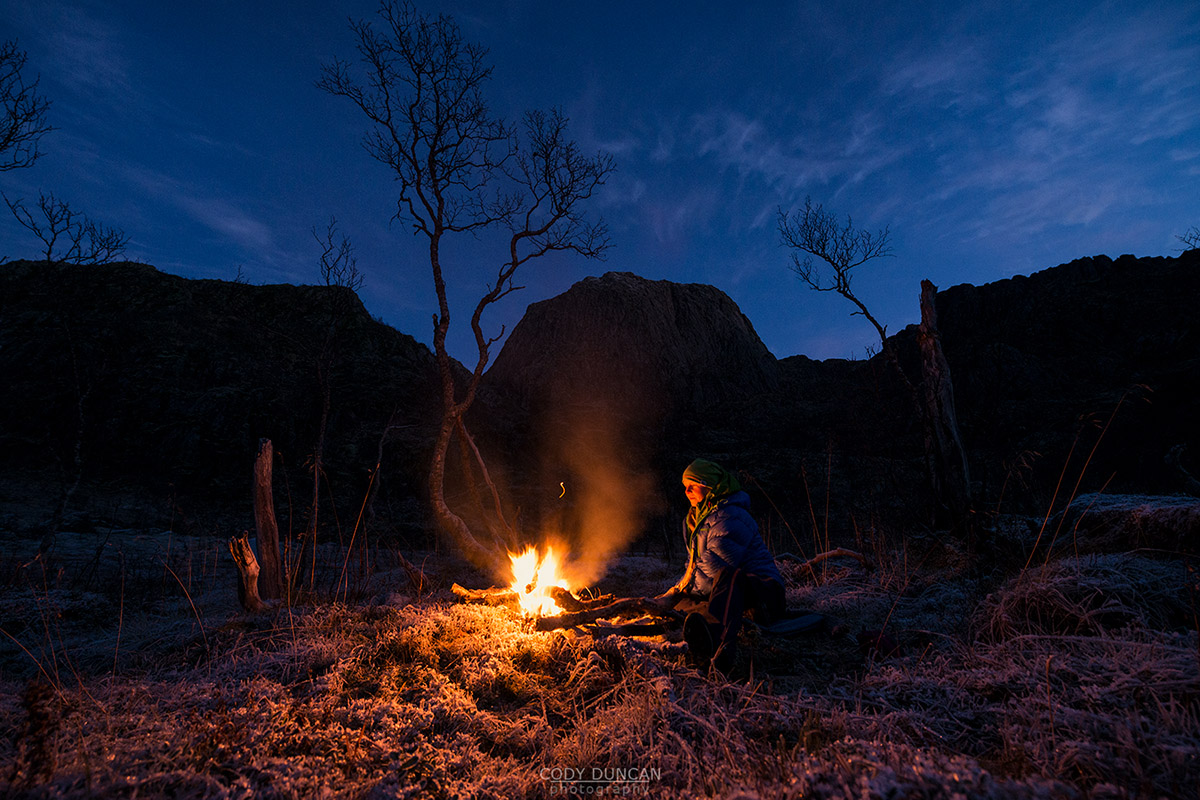 The past couple days I was up on Vesterålen to make an attempt to climb Reka, an iconic peak a bit north of Sortland. In the short and cold November days, we didn’t quite have enough time to get to the summit, and even with a base camp the previous night, didn’t get back to my van until well after dark. But it was a good adventure.

Leaving Lofoten in the early morning, it was a couple hours drive to the trail head, and the a couple more hours hiking – and trying to find the route – through the frozen, icy forests of Vesterålen. With the November sun low on the horizon, our route no longer sees any direct sunlight throughout the day, plunging the forests into a winter chill.

Although we had planned to have a base camp as high as possible, the early darkness gave the need to setup camp earlier than expected. Luckily there was a nice clearing for the tent, now completely frozen, but would otherwise be a total bog in summer. With numerous dead birch around, we thought a campfire might help keep the cold away a for a while. But as good as our attempts were, the cold and the frost eventually got the better of our meagre fire, and we reluctantly gave up and returned to the warmth of our sleeping bags. Soon however, northern lights filled the sky and I was back out in the cold again…