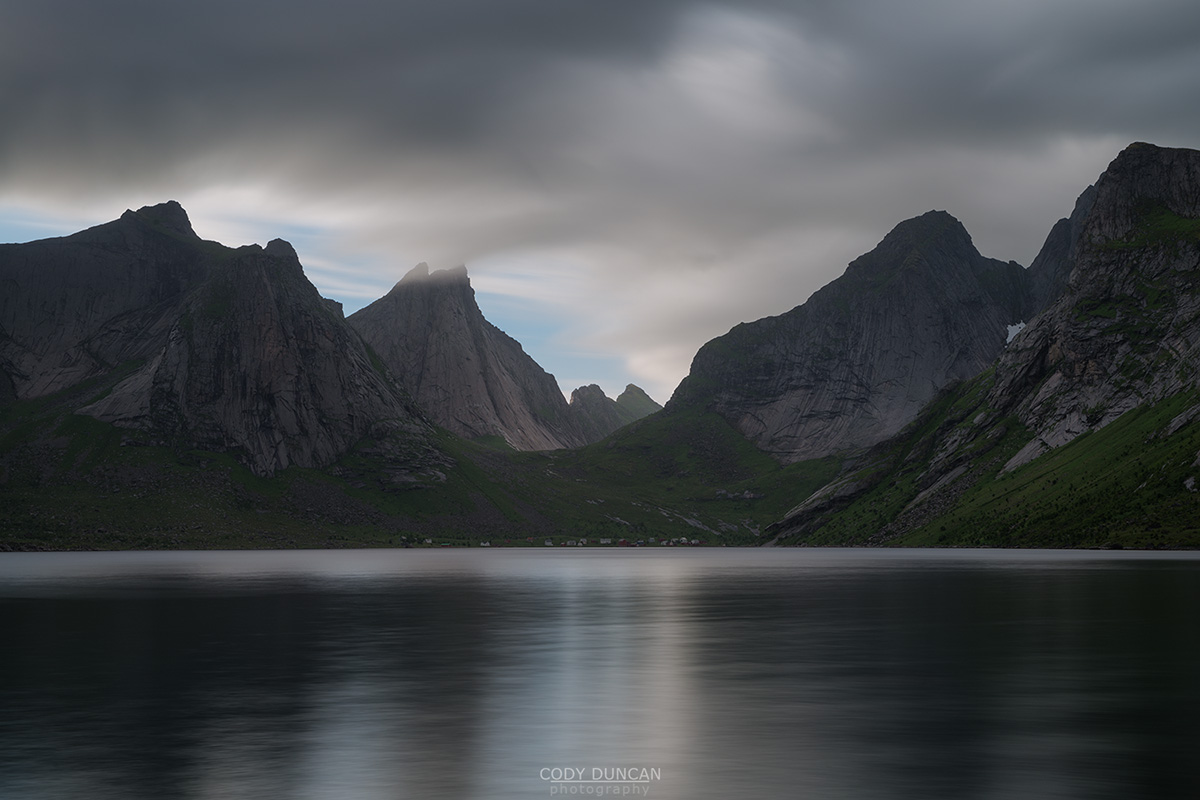 The rain was pounding my windshield as I headed west towards Reine. We had made plans to borrow a friend’s boat and to do a bit of exploring in the fjord, but I wasn’t very optimistic.

The rain was still falling as I pulled the boat to shore and figured out how to work everything. Good I brought my rain clothes! From Reine we headed towards Rostad, a small village on the east side of the fjord. Despite all my time on Lofoten, I had never been there before.

We moored the boat at the only empty spot on a small pier. But as we walked towards the village, we met someone on the balcony of a house who informed us that we shouldn’t park there, as another boat was coming. Luckily, our fiend in Reine had told us to say hello to a friend in Rostad, the man we were speaking to. Suddenly it became okay for us to leave the boat, and he could move it if necessary. Good to know the right people!

There are several mountains out of Rostad that have been on my ‘to do’ list for some time. However, as waves of rain still passed us, we decided just for a bit of easy exploring.

Eventually we made out way up to the lake below Segltind, seeing if there might be a possible route of from this side. The hours grow long and it was time to return to Reine. Back in Rostad, The clouds were blowing over the peaks above Kirkefjord. I walked out on some rocks and took a final image for the day. 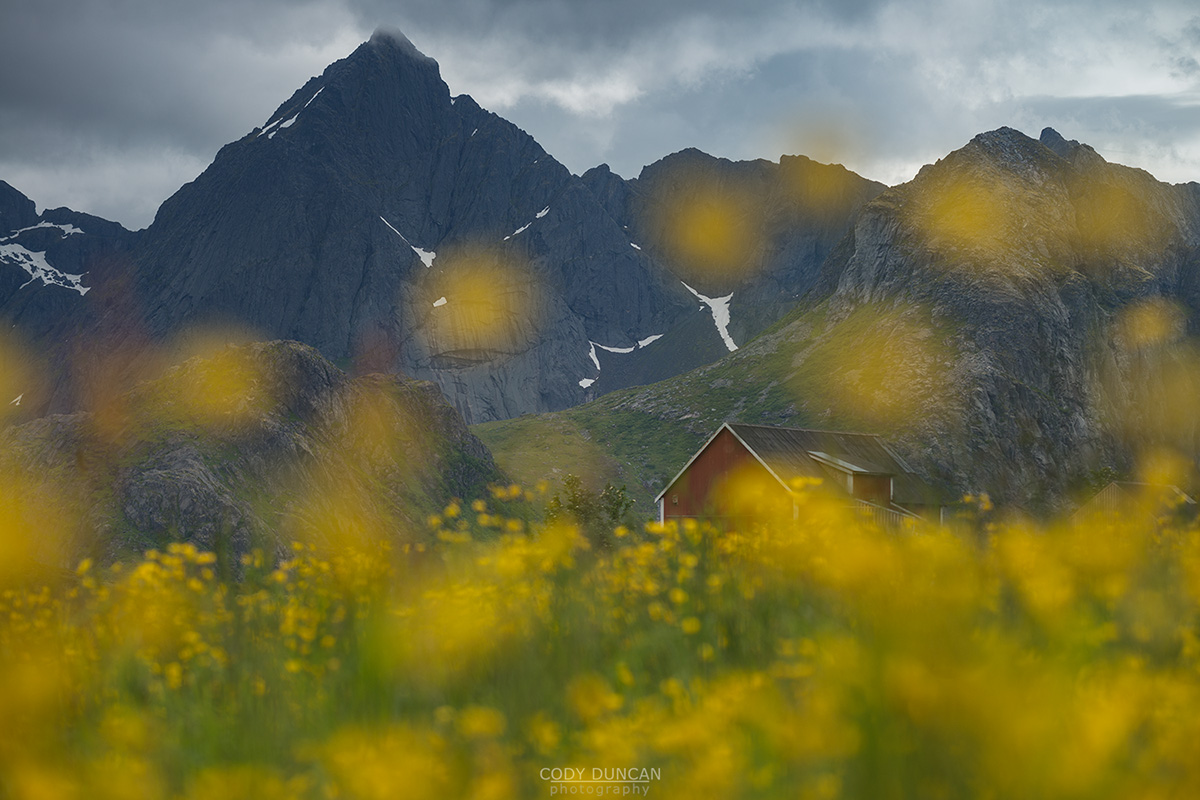 From mid June until early July the fields of Lofoten are filled with endless color of an infinite amount of flowers. Even the farm fields, such as this, can provide endless photo opportunities. But one has be be quick.

Farming on Lofoten is mostly simple: Let your field grow, cut it, let it grow again, cut it again. For the first growth, beginning in late May, the fields explode with color. But as the flowers peak, soon the farmers will bright out the mowers and cut everything to the ground to store for the winter.

I had driven past this field two days prior, and all was fine. Driving past on this day, in early July, the farmer had already partially cut the field. Knowing the opportunity would probably not survive the following day, I stopped for a quick photo. Maybe not the best light, but this is what Lofoten looks like at its peak: fields of gold. 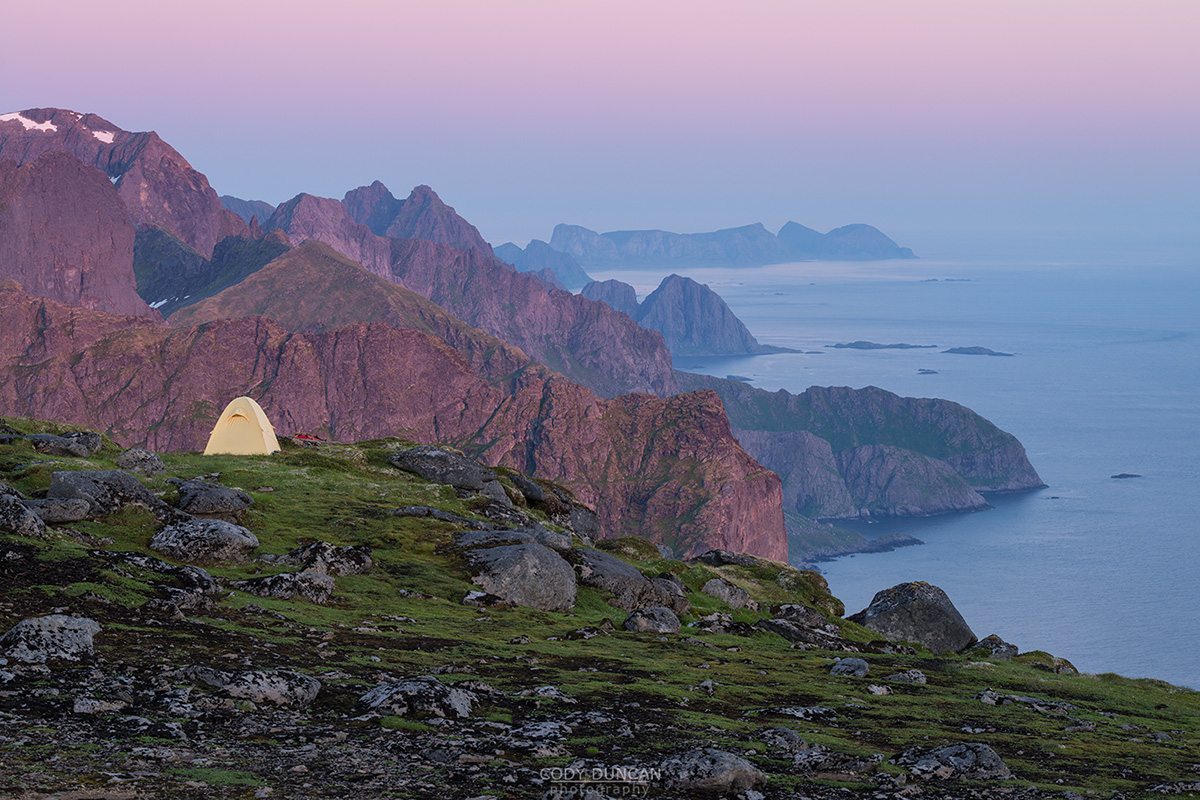 After 239 previous Friday photo posts, I can’t always remember what I have written previously, so perhaps this might be a bit of a repetition, or maybe something new.

I like to camp on the summit of mountains because I know that I’m a bit lazy. When I tell this to others, they say sleeping on mountains is more work than just hiking. But to me, its not.

I want to get the best light when on my mountain trips. But I also like my sleep. So when camping on summits, while maybe a bit more work to get there, once at the top, life just becomes a waiting game. I can sit around, drink a bit of whisky, eat a good meal. And then, if the light comes, I’m already there! None of this hiking down in the dark crap, or getting up 5 hours before sunrise.

I can sit around and be lazy, then shoot sunset. Wake up, roll out of the tent, and shoot sunrise. Simple! To me, it makes perfect sense. Two photo possibilities for the effort of one. 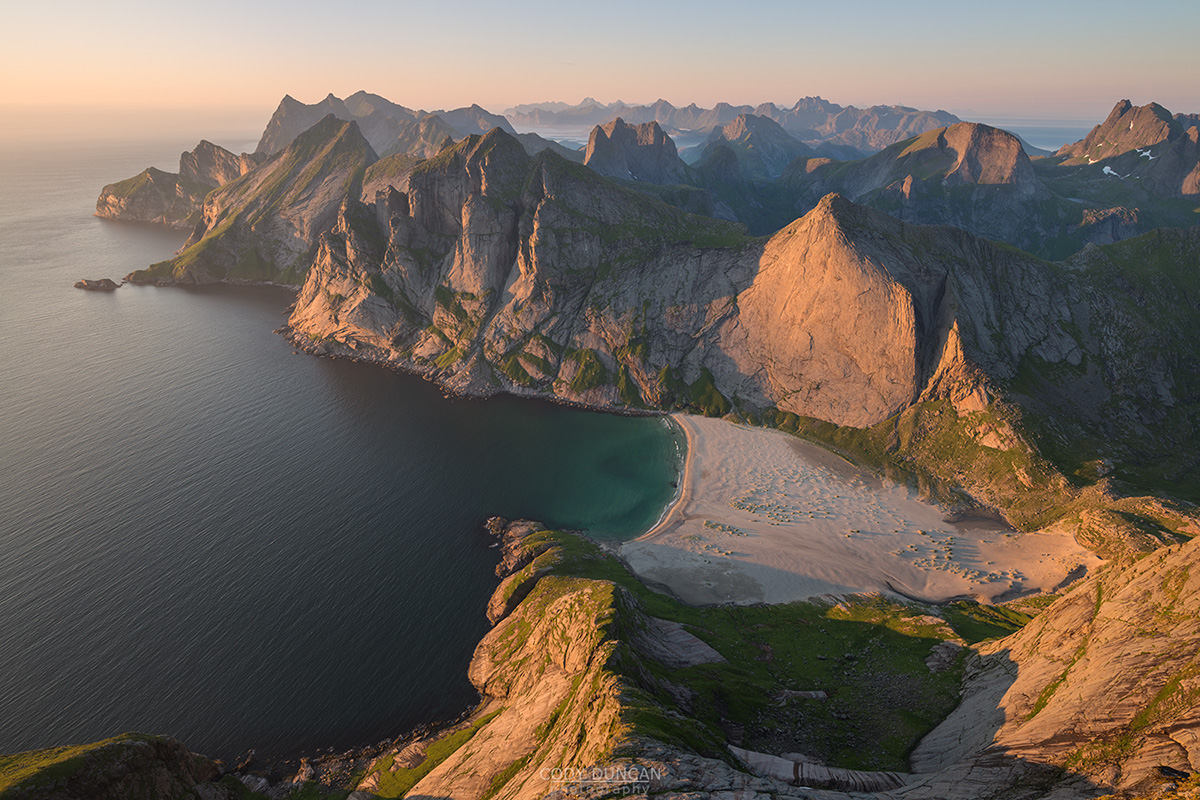