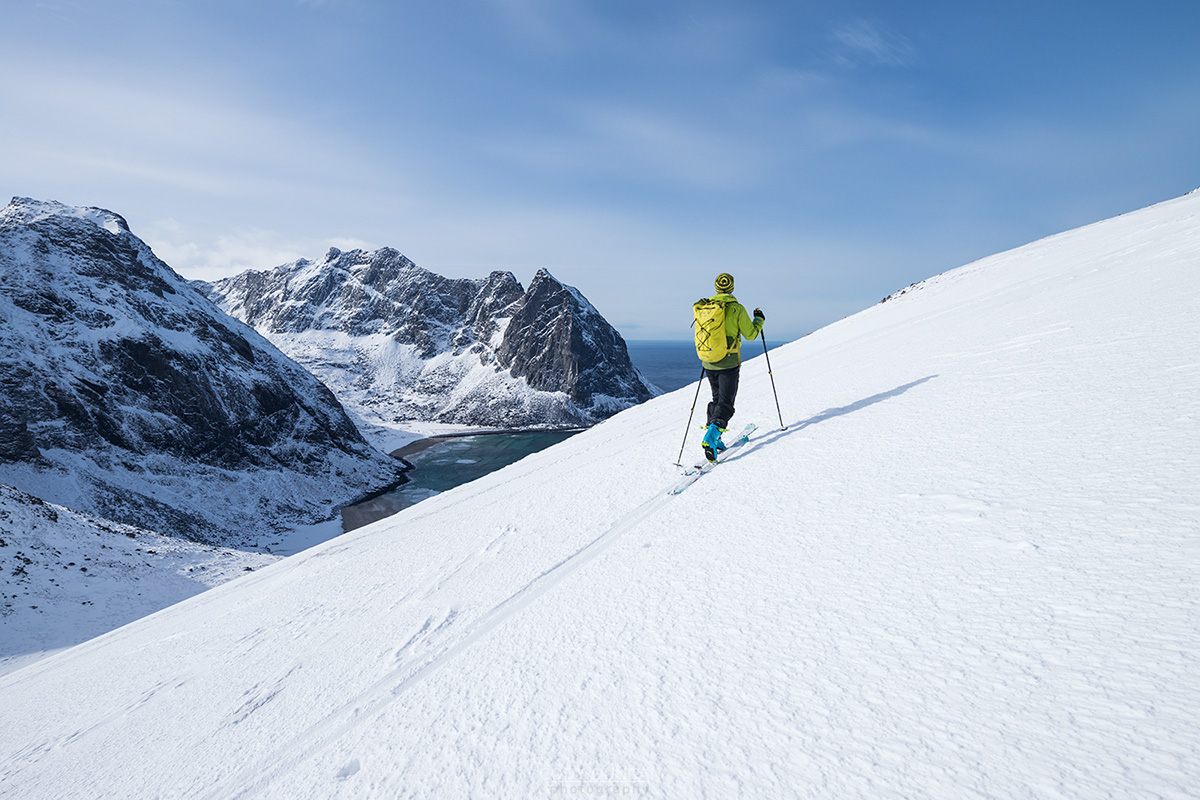 Between Monday and Friday I made 4 ski tours to the summit of Ryten. The weather was and light pretty dramatic some of the days, not sunny like this photo from last year. I actually wish I had brought my camera, but me skiing and photographing is not a safe combination yet.

Overall though, compared to making a similar amount of trips last year, I’m amazed at the amount of people on the mountain, both skiers and hikers. On Wednesday alone, I probably passed over 40 people on the mountain, and that was just in a 2 hour round trip. Only 3-4 years ago, I don’t think many people visited this mountain in winter at all. So now even in winter, there are issues with parking! And Kvalvika has been even more busy by appearance.

If you are heading out to the mountains of lofoten right now, make sure you are prepared. The Islands have quite a high avalanche risk at the moment: you can check the forecast at www.varsom.no. And fresh snow is falling every day, so all footprints will be erased by morning. And still below the snow, remains a lot of ice.

With my winter 2018 workshop season just having come to an end, I’m happy to announce some dates for winter 2019.

Head over to my Photo Tours page for more info. 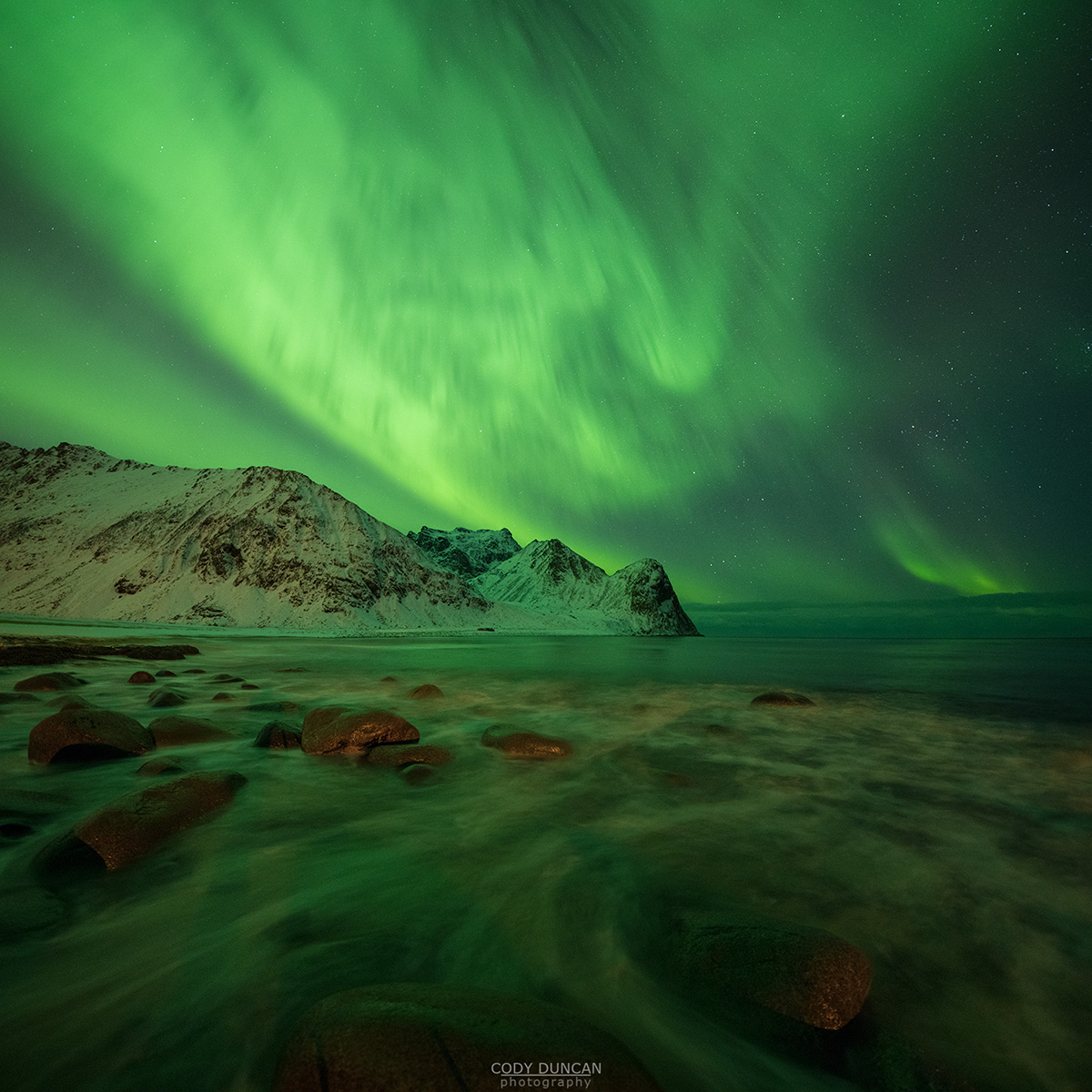 My final photo workshop of the winter season ended early Monday morning, it what was probably the worst weather of the entire winter thus far. Compared to last year, 2018 was a dream season – though a little more snow would have been nice. But weather wise, there were no ‘indoor weather’ days until this past weekend.

And good weather on Lofoten means lots of green at night. Every trip managed at least 2 nights of decent northern lights, while a couple tours got lucky with some solar storms – such as this photo from last week.

We started the night at Storsandnes, but as soon as I saw what the lights were doing, I made a quick decision to head over towards Vik beach, where we remained for some time until the sky grew quiet. Next was a quick stop at Uttakleiv, but the entire beach was fully of blinking camera, so we headed for a slightly long drive to Unstad – where we had the beach to ourself somehow.

Even as we were arriving, the aurora had picked up again. And as we made our way down to the the beach, the entire sky began to fill with light. Another one of those nights where you don’t know which direction to look.

Just before the last tour I had finally made some much needed equipment upgrades as well: Nikon D850 + Sigma 14mm f/1.8 lens. I should have bought this lens at the beginning of winter! It might not seem like much, but that extra 1.3 stops of light can make quite a difference. In this shot for example, I was at 4 seconds, where I would have been 8 seconds with a f/2.8 lens. Quite a difference! And I could have shot even faster had I raised the ISO beyond 1600.

Sadly, there is only a few more weeks left in the aurora season. So I will try to make the most of things in the days to come. Though the lens is a beast! So I’m not sure whether I will attempt to carry it up any mountains – and unfortunately, it doesn’t replace the 14-24. 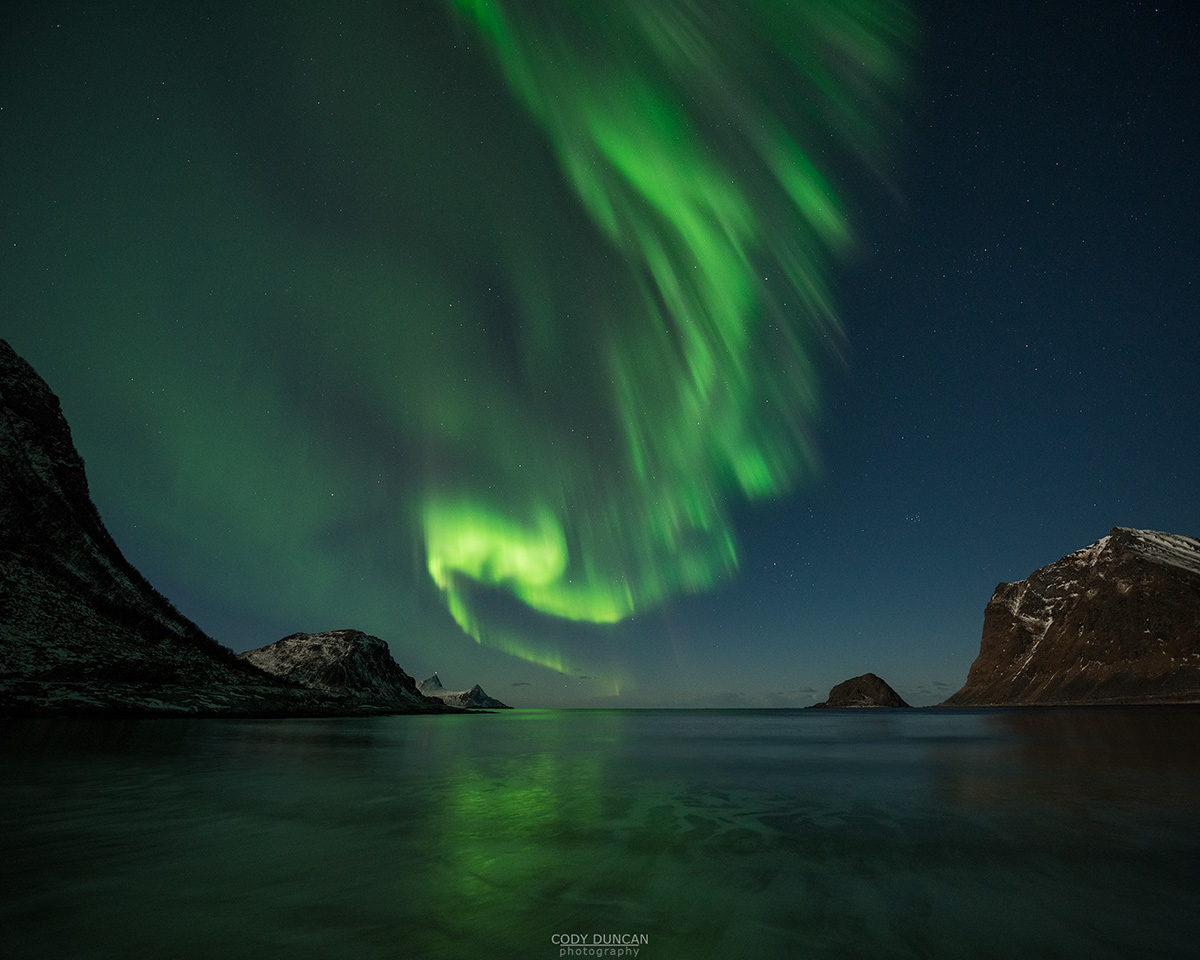 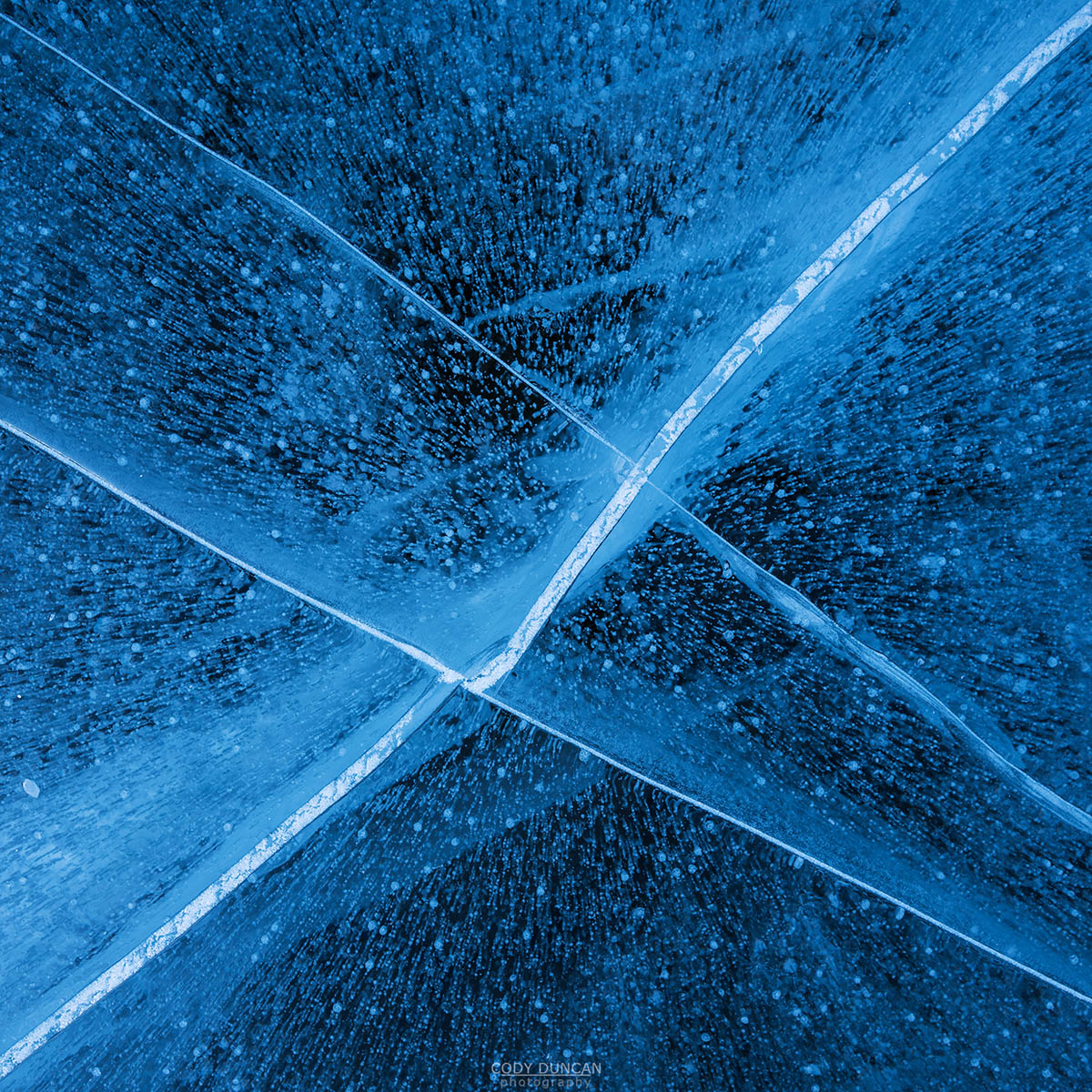 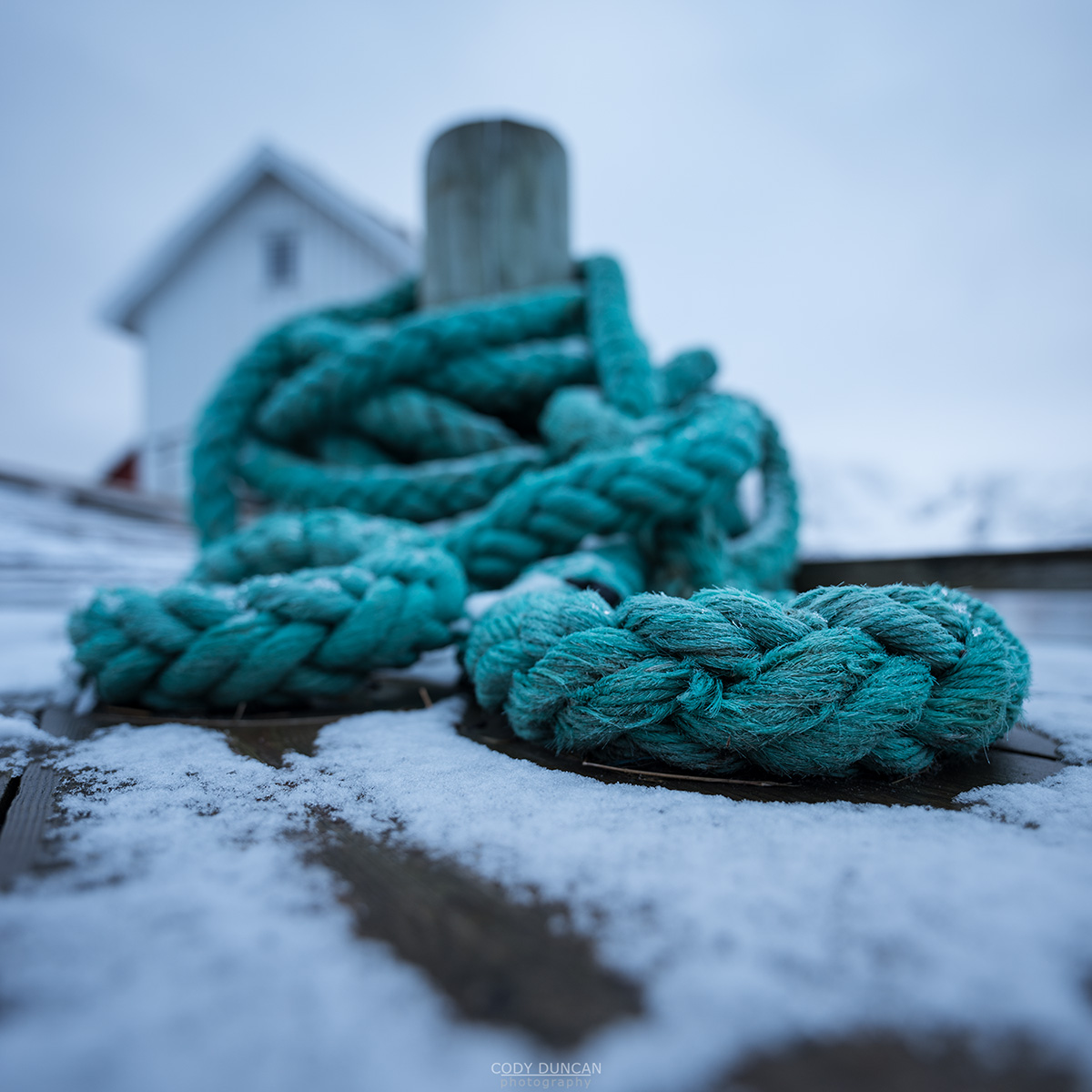