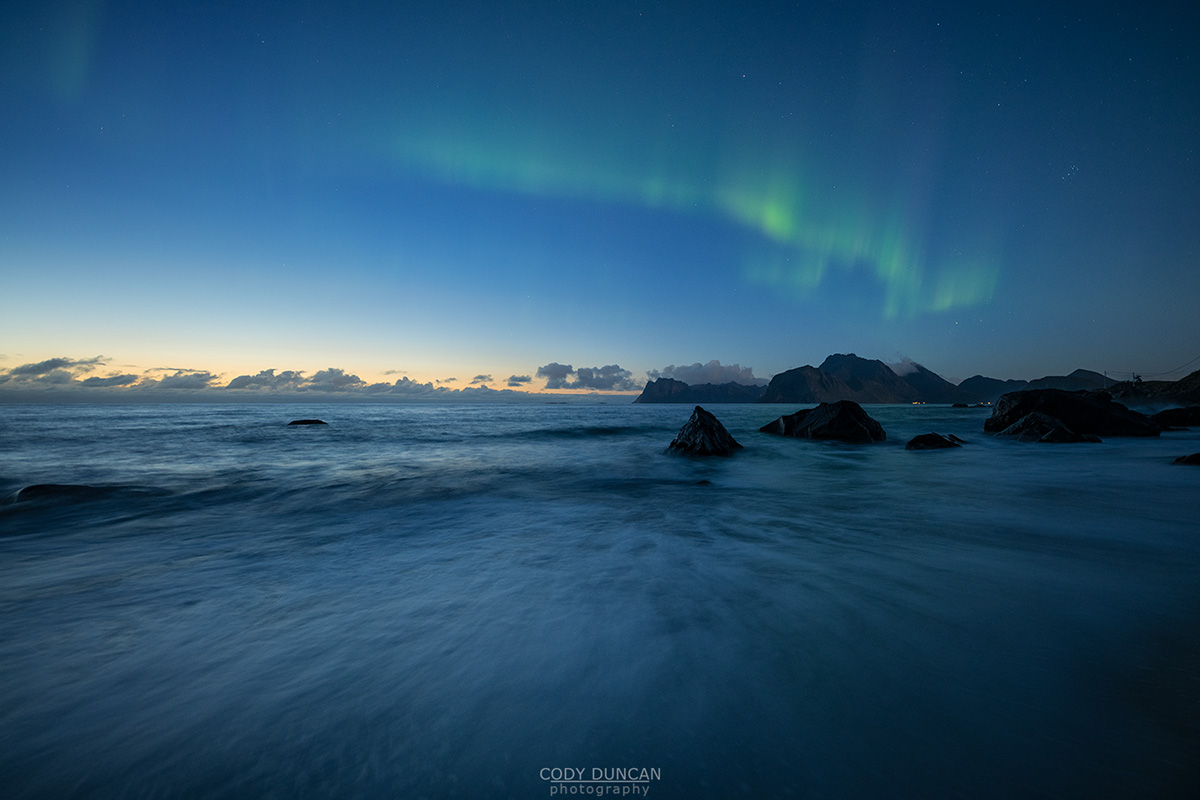 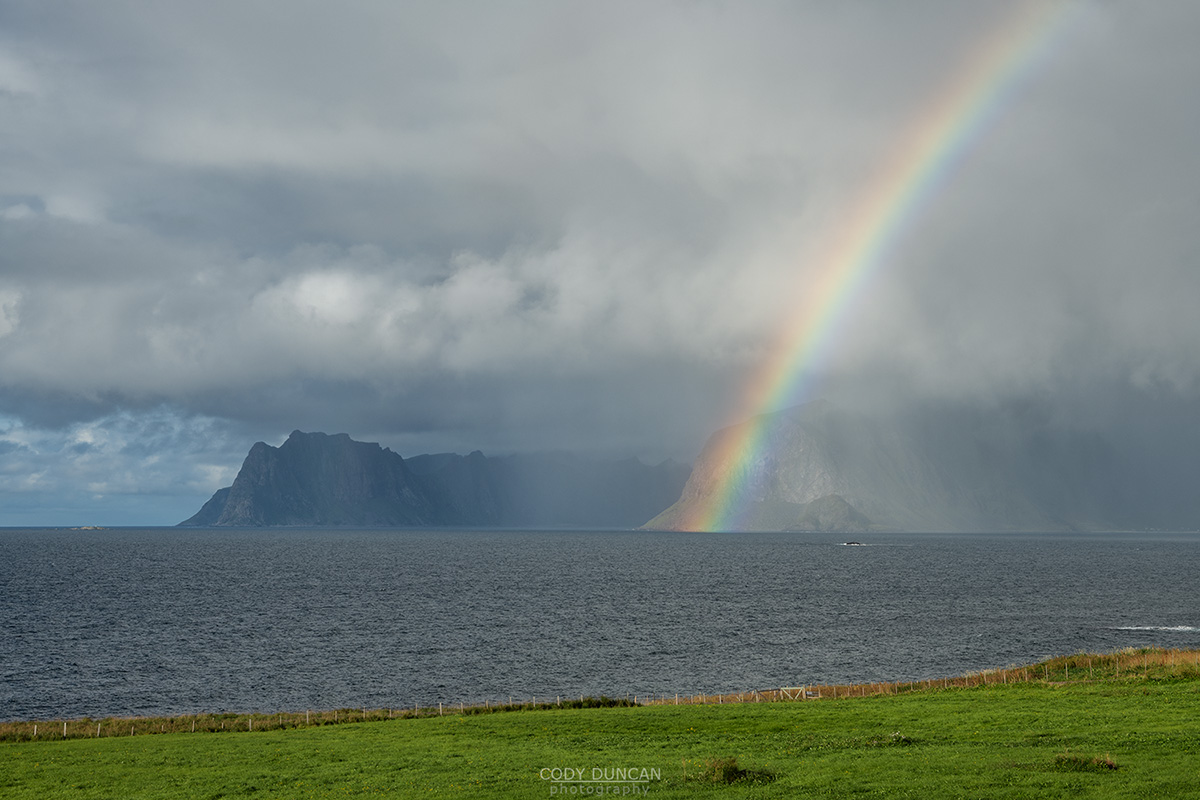 Usually I think of autumn as the season of rainbows here on Lofoten, with the turbulent weather and sun, rain, sun, rain, sun, type weather passing over the islands. But this year, summer seems to have ended with a nice sunset on the last day of July and immediately after, autumn began! To say that August has been rainy and windy would be an understatement.

I’ve barely gone to the mountains much lately, preferring to take up my old childhood activity of surfing in this wet and unpredictable weather. After more than 10 years away from surfing, I’m thoroughly hooked again. To the point that I’m looking at water housings for my camera. But I think they are beyond my budget for some years to come, unfortunately. Really not sure how people afford all this stuff. Perhaps I just need more followers on Instagram like all the cool people who take the same pictures from the same locations? Anyone got a yellow jacket, one of those woven blankets, and a drone I can borrow? Adventure and exploring…

So without bringing the camera out with me much lately, the only photos I seem to take are from by bathroom or office windows. Luckily, the views seem to be better than average lately, so I have a good excuse to be lazy! 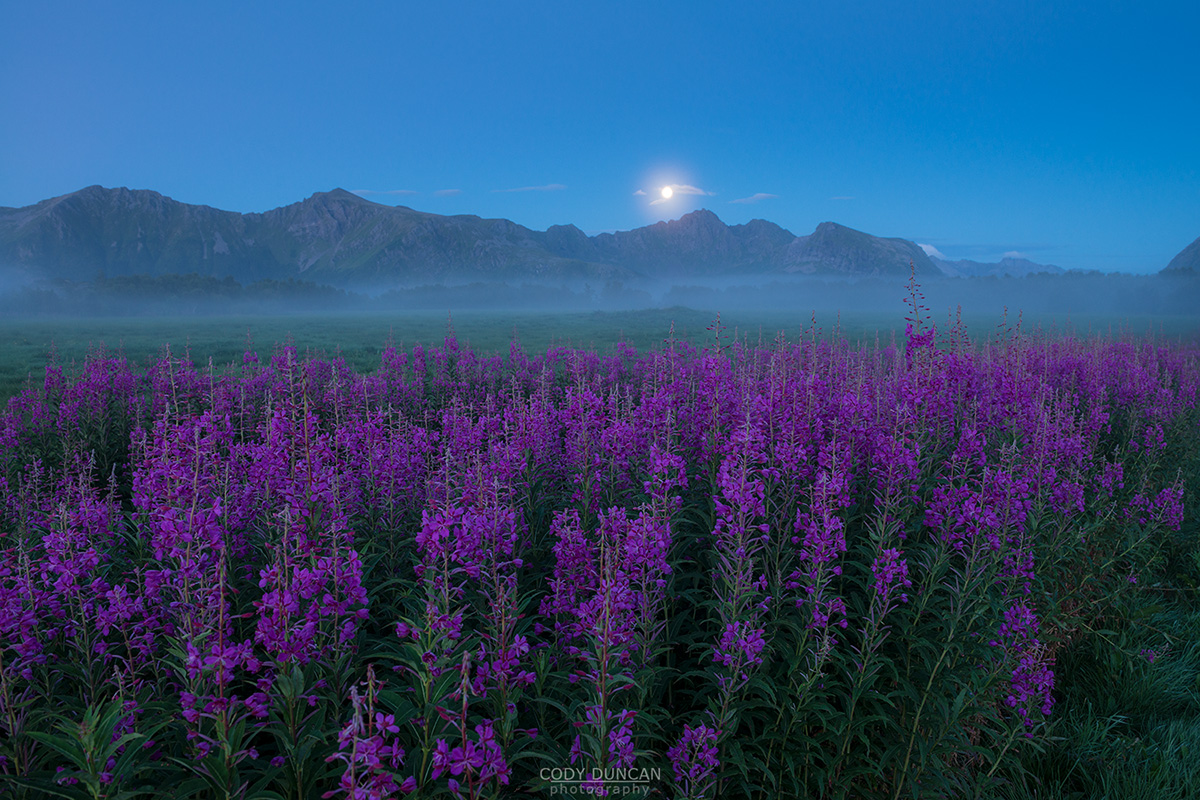 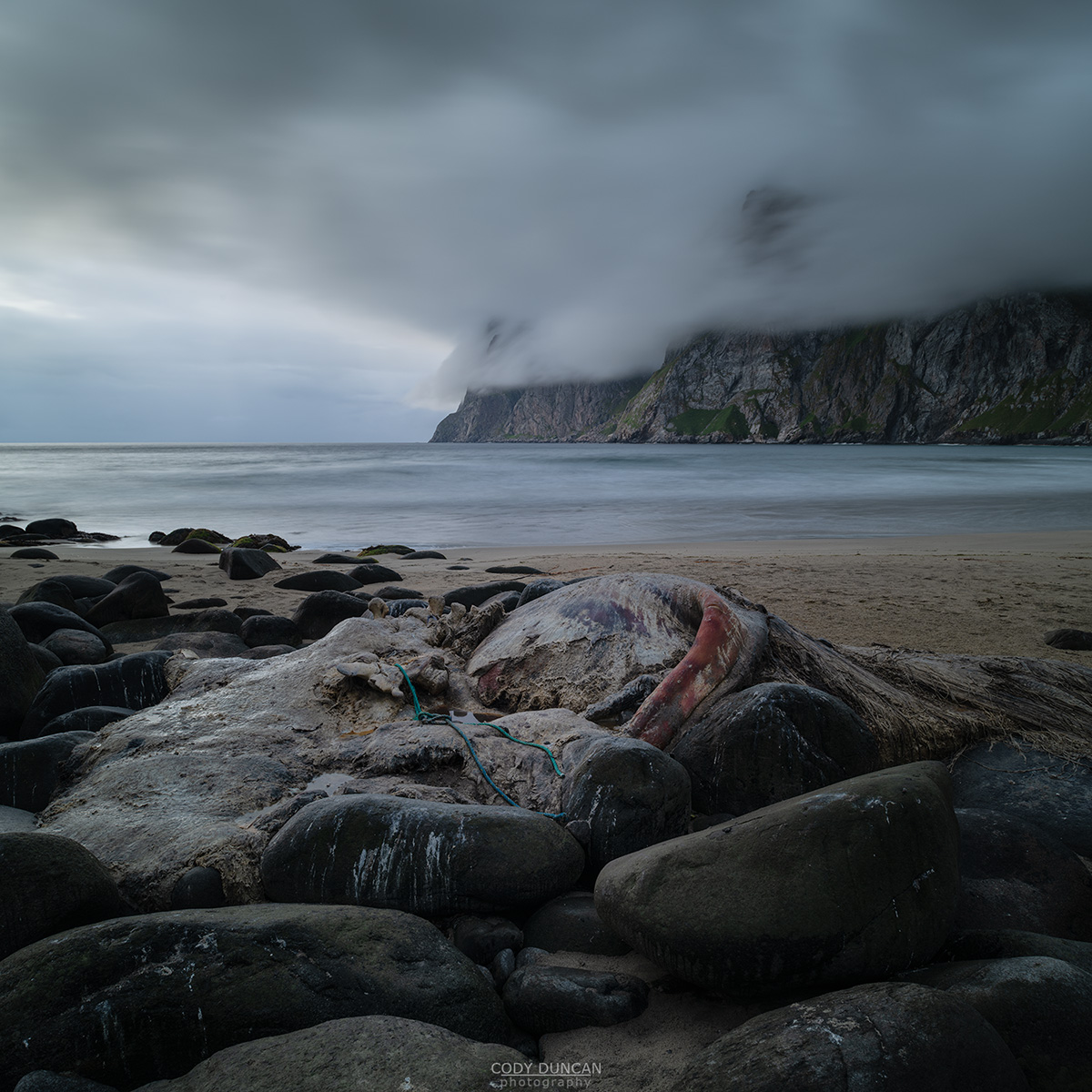 With a somewhat poor weather forecast yet still looking for a night outside on a misty Saturday night, we made the journey to Kvalvika beach. These days, with the parking lot overflowing and cars parked all along the road – even on a rainy Saturday – Kvalvika is a place I rarely visit in summer anymore. For the time being however, the west side of the beach still can be relatively quite, and there was only one other tent on this night.

Looking for a place to pitch my tent, I noticed the rocks looked a bit strange. Hmm, no, not rocks. A Whale! It looks like it’s been there a while by the decay. The cool air kept the smell to a minimum, but occasional the breeze blew onshore and, well…

The clouds were nice and moody, with occasional spells of rain passing now and again. I wish the whale was separated a bit more from the rocks – other angles worked better for the whale itself, but not the background. I wanted Ryten and Fuglhuken hidden in my shot, with the summits barely emerging from the clouds. So I had to settle with this angle, which makes it a little hard to tell what is going on, unfortunately. I also took some images of just the sea and the mountains, which are stronger compositions overall, but it is not that common that I sea whales washed ashore here, so this was still worth a shot. 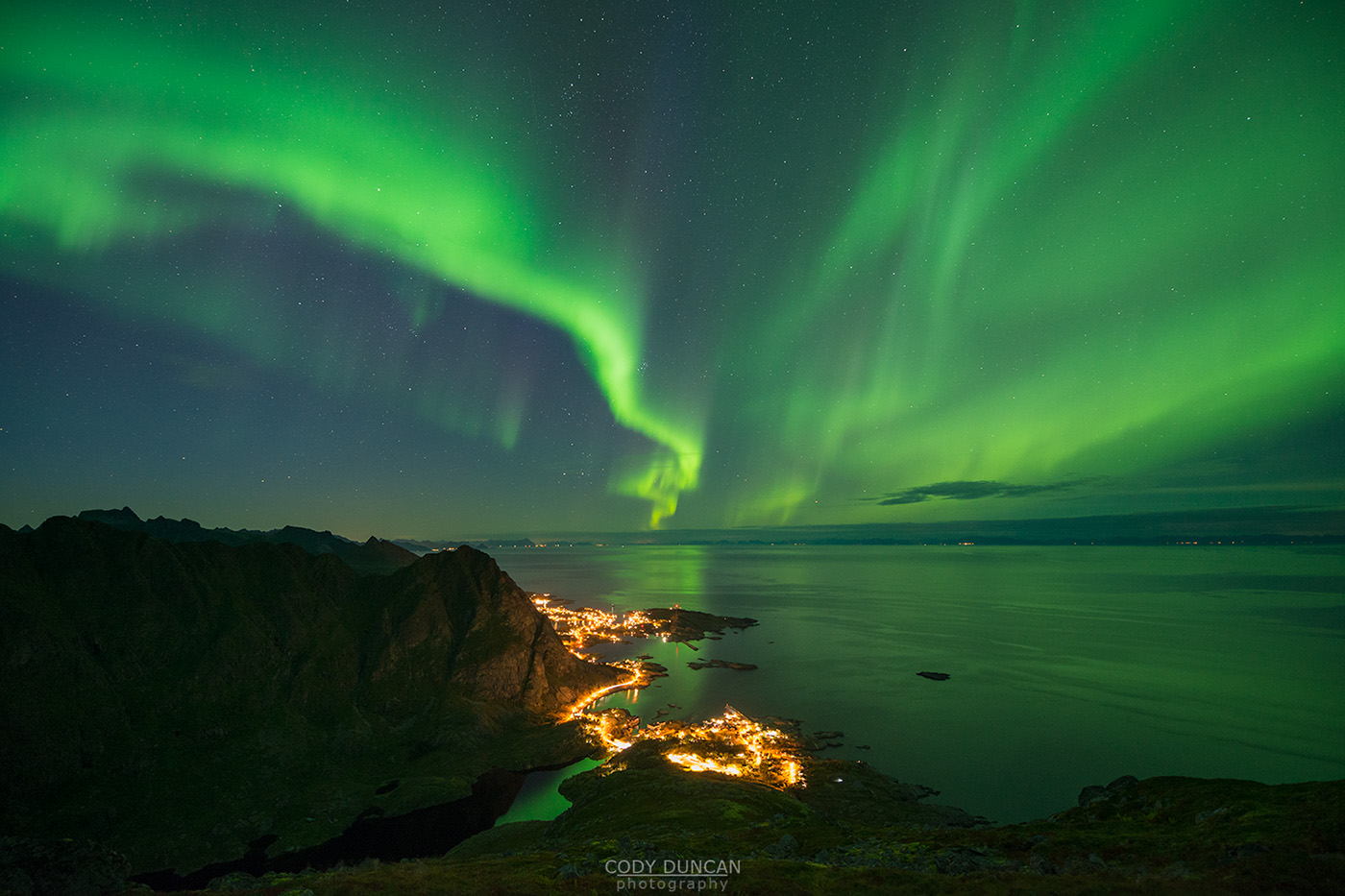 Sometimes I feel like August is a light switch here in the north. Suddenly the nights feel dark again, the roads seem to have emptied overnight, and the weather has that first autumn chill. And August means that the aurora season is only a few short weeks away.

I will miss the endless summer nights, and after the cold rainy weather of June this year, July turned out to be fantastic! One of my hottest summer’s here on Lofoten – often too hot for the mountains actually! But summer will be back next year. And before the winter snow arrives there are still plenty of nights to be had out in the mountains – not under the midnight sun, but under the dancing aurora.

Last year, September’s weather seemed to be better than the whole of summer. With many clear, calm nights. This also coincided with some strong solar storms – Any talk of the coming solar minimum stuff in BS as far as I’m concerned. So I was lucky with several nice nights looking for some interesting new compositions to shoot under the northern lights.

This is a tricky pursuit however, with a high miss rate, as, unlike a sunset or some clouds in the sky, you can never be certain where the aurora will appear. A few times though, I seemed to be in a decent location with the aurora working fairly well for me. Such as this shot here, where I was camped on the summit of Andstabben, with the village of Å below me. Normally I’m not a fan of distracting city lights in aurora images, but in the case, with the aurora almost perfectly aligned with the direction of the lights below, it works for me.

Who knows what this September will bring. Even if only half as good as last year, I will be happy. Though I will also be away traveling for the first part of the month, and busy with workshops during the 2nd half – still some places available on my Exploring Autumn workshop. So I’m not sure how many nights in the mountains I’ll get, and if my time off will align with good weather and northern lights. We will see…