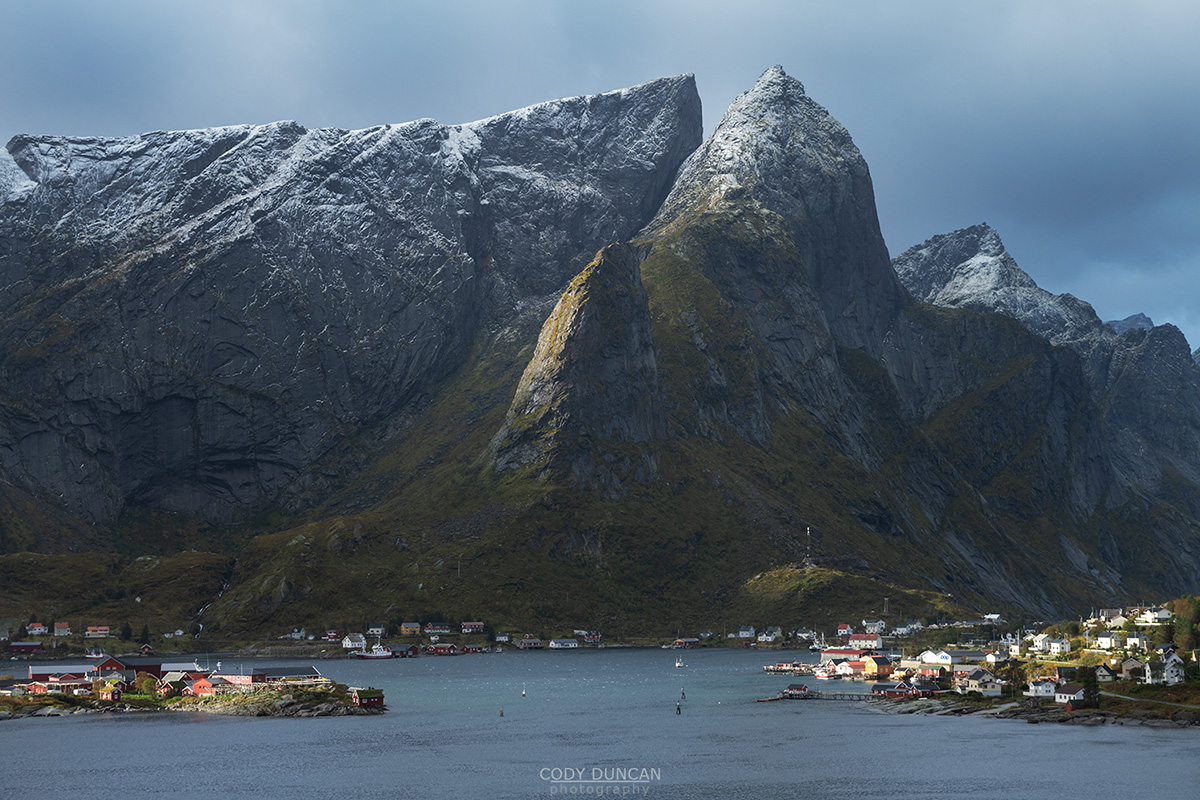 The last days have seen the fury of the first autumn storm over Lofoten. Wind, rain, clouds, and more wind. The Gimsøy bridge has been closed for some periods on Thursday and several ferries were canceled. Luckily, autumn seems late to arrive this year, and not too many leaves have blown off the trees as far as I could see. In other years, the autumn color could have ended today. Which is why autumn is always a bit of a risk here, as one never knows what will happen.

This is a 6 image pano from an approaching weather front while on Gimsøy. Autumn often brings a dramatic change from the weather of summer. Autumn is the season of rainbows, and the season of dark skies – often on the border of being able to shoot and having to run back to shelter from the sideways rain. But bad weather makes good photos. And so that is why autumn on Lofoten is one of my favourite seasons to photograph.

Today starts my first photo workshop of the season. For the next month I’ll be out with groups trying to show the best of Lofoten. At the moment, the weather forecast is looking a bit grim. But on Lofoten, that means opportunity for something special – as long as one is willing to get a bit wet… 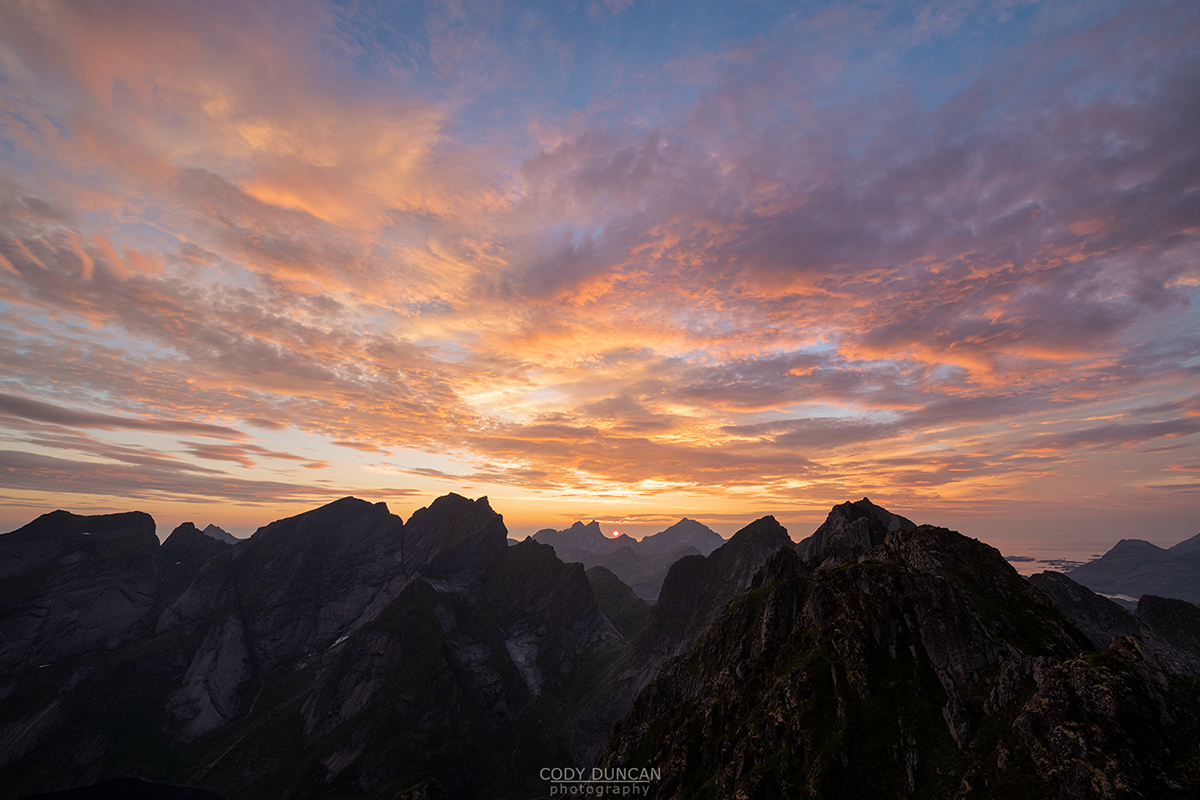 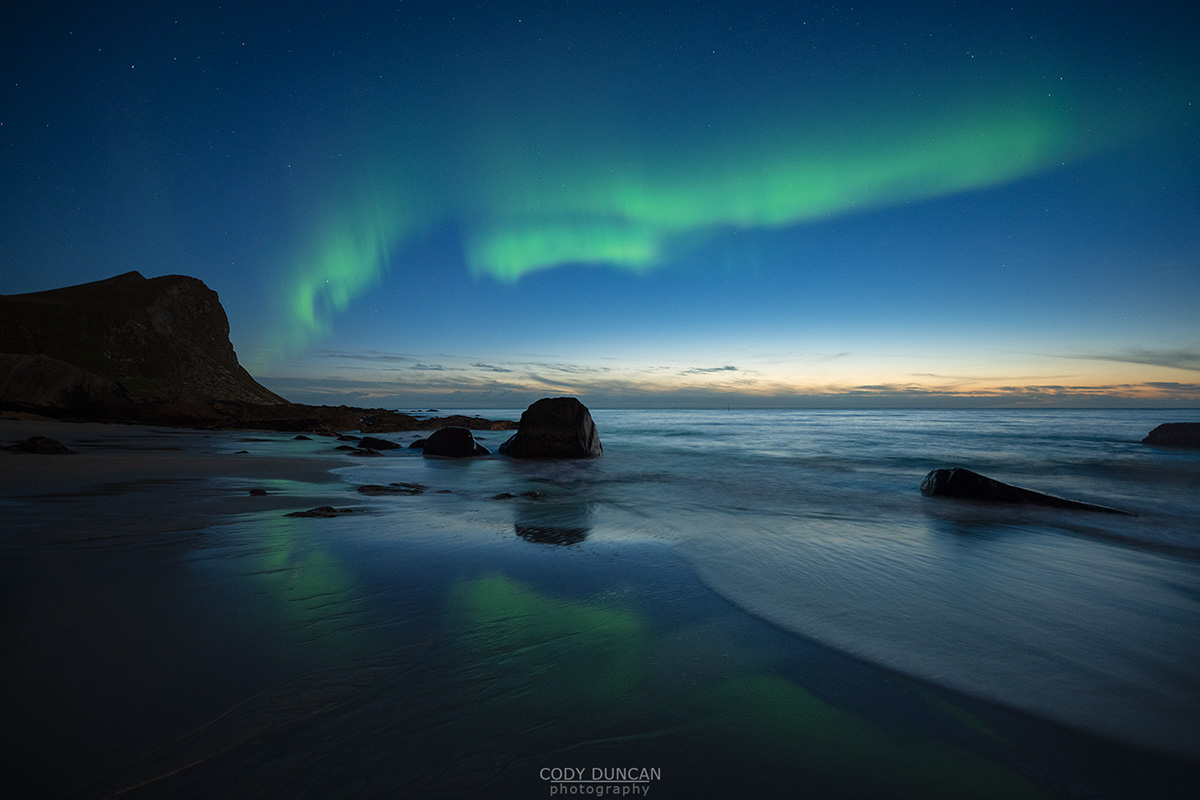 The final night of August brought the third aurora of the 2018/2019 season. Not a bad way to say goodbye to summer and hello to autumn – I had already seen the first yellow leaves, so I think it’s safe to say that autumn had started…

One of the things I like about the start/end of the aurora season is the twilight glow which remains on the horizon throughout the night. Beyond the fact that it keeps the overall scene brighter and adds light to the landscape, I find it nice to have a separation on the horizon, with the sky fading to a deep blue the higher it gets.

And even though the sun is spotless at the moment and the KP index was only a 1 or so at the time, never rely on this too much. I see so much talk online about KP this or that, but the reality is, it doesn’t matter all that much. And just like the weather forecast up here, the aurora forecast is mostly a suggestion of what will likely happen, but there is still a fair amount of unknown. So tip of the day: If the sky is clear – go out!