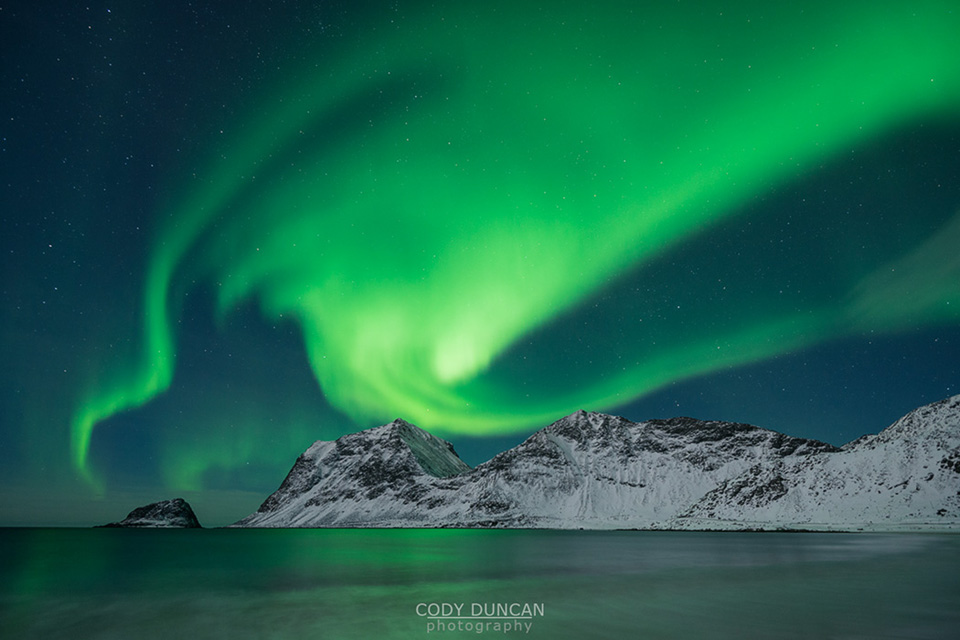 I almost missed this one due to laziness. One of the, if perhaps the only, benefits of sleeping in a car during Winter in Lofoten is that you don’t really have anywhere to go, so it’s no problem to wait all night in search of the Northern Lights. This night however, was the first night after a week on the islands (and sleeping in a car) that we would stay at a hostel. I was looking forward to sitting back and relaxing, a warm dinner and maybe a beer or two. But as the evening arrived clear and calm, I knew it would likely be another late night Aurora hunting.

We left the hostel in Ballstad around 9:00pm and headed towards Utakleiv. I had shot the Northern Lights here a few days before, but I knew there would be several other viewing options: Haukland, Vik, Vikveien, depending on where (if) the lights decided to show up. Luckily I wouldn’t have long to wait on this night. Shortly after arriving in Utakleiv a faint green glow appeared in the northern sky. At that moment, Utakleiv was a bit on the windy side, which it often is, so I decided to head back to Vik beach where I knew I would be far enough from the mountains if the Aurora stayed low in the sky.

Soon, that faint glow turned into a bright streak rising into the sky. A few moments later, everything intensified and that magical dance of the Northern Lights filled the sky. 20 minutes later, the glow faded and the lights were gone; almost leaving me thankful for having an early night but glad my effort was briefly rewarded.

In the first week of this February trip, I took more Northern Lights photos than last years 8 weeks north of the Arctic Circle combined. I definitely had some luck on my side this time!

Technical Info: Most of the common info suggests to shoot the Northern Lights with your lens wide open. I think a lot of this thinking is from the old days of shooting with 100-400 ISO film. Today, when you can easily crank up most modern DSLRs to ISO 1000+, a fast lens is less important. I like to stop down slightly to help with a bit more overall sharpness; especially when shooting a ‘landscape featuring the Northern Lights’ type of photo, not just the Lights themselves in the sky. The moon was at about a quarter on this night, giving enough light to illuminate the snow covered mountains. Though it could have been a bit brighter in my opinion. Again, I go slightly against the common conventions here, which suggest a dark, moonless night when shooting the Northern Lights. I like to have enough light to include the rest of the landscape into the photo – that’s why I’m on Lofoten and not someplace else!

Another piece of advice when shooting in the dark is to check the exposure with the histogram, not just estimating the exposure by eye. Your eyes will have adjusted to the darkness, so what looked like a properly exposed image on the back of your camera will likely be a stop or so under exposed once you’re back on a computer and under normal lighting conditions.