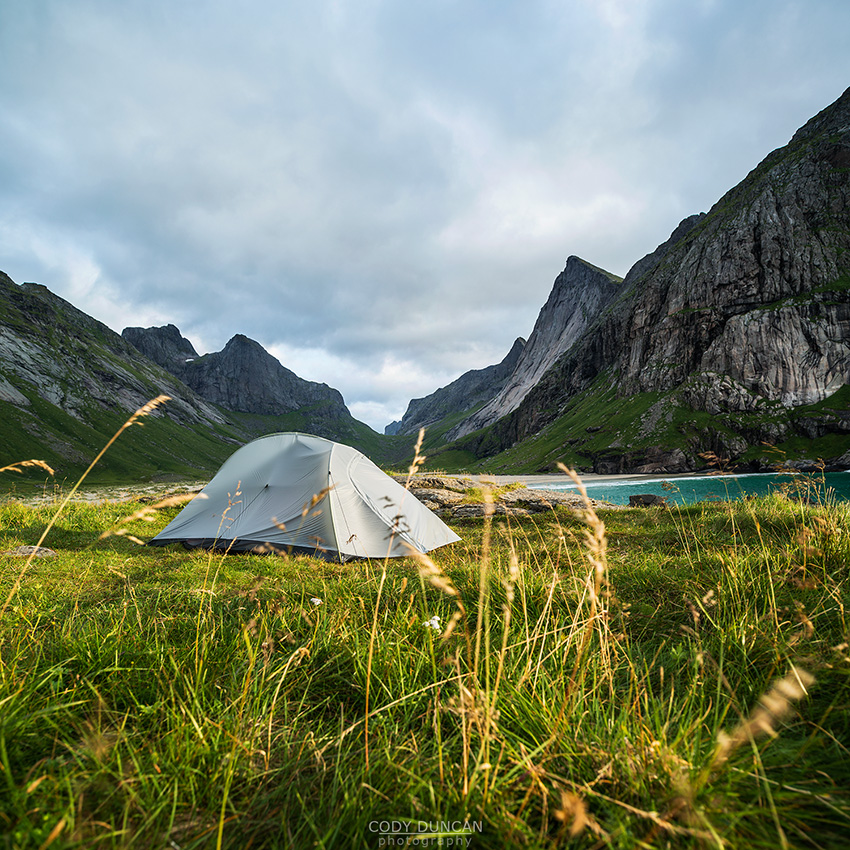 I think Horseid beach is one of the more wild and dramatic locations on the Lofoten Islands to set up a tent.   With a multitude of camping places available, heading out to the furthest reaches of the beach to a small grassy headland is a slightly exposed, but unforgettable place to pitch your tent.

Normally I don’t like to hike in the rain, but immediately upon departing the ferry in Moskenes on a late August morning I was already changing into my rain gear.  A steady line of cold, tired looking backpackers was waiting for their departures from the islands, the Summer in the north quickly coming to its end.  My journey was just beginning however…

The Reine ferry to Kierkefjord – Vindstad was more crowded than I was expecting, however only three of us exited in Kierkefjord.  Despite the fact that the pass through the mountains is quite low, it was thoroughly concealed in clouds.  Heading higher and higher up the trail the rain fell harder and the visibility dimmed, until it was barely possible to follow the trail.  At one point I wasn’t sure if I was still going the right direction and it was only until I stopped for a second and heard the faint crashing of waves in the distance that I knew I was still on the right path (there is really only one way to go, so it’s a bit hard to get too lost.).  Finally I descended below the clouds and could see the beach, still a few kilometers away.

From the distance, Horseid beach doesn’t appear all that big, but it is a deceptively long hike from the back of the beach until finally reaching the edge of the sea.  Still raining, I immediately set up my tent and crawled into my sleeping bag.  And due to my exhaustion from 30 hours of travel, I was quickly asleep.  Not that I was missing any photo opportunities anyhow.

Gray skies greeted the next morning, with elusive moments of sunlight appearing every now and again between passing bands of rain.  Most of my time was spend gathering wood for a campfire and figuring out the best place to gather fresh water (the small waterfalls on the right side of the beach).  But every time the sun would pop out for more than a minute, I’d grab my camera and try to get a photo or two.  And hence, sometime in the early summer evening, I turned my attention to my tent as a bit of weak light arrived.