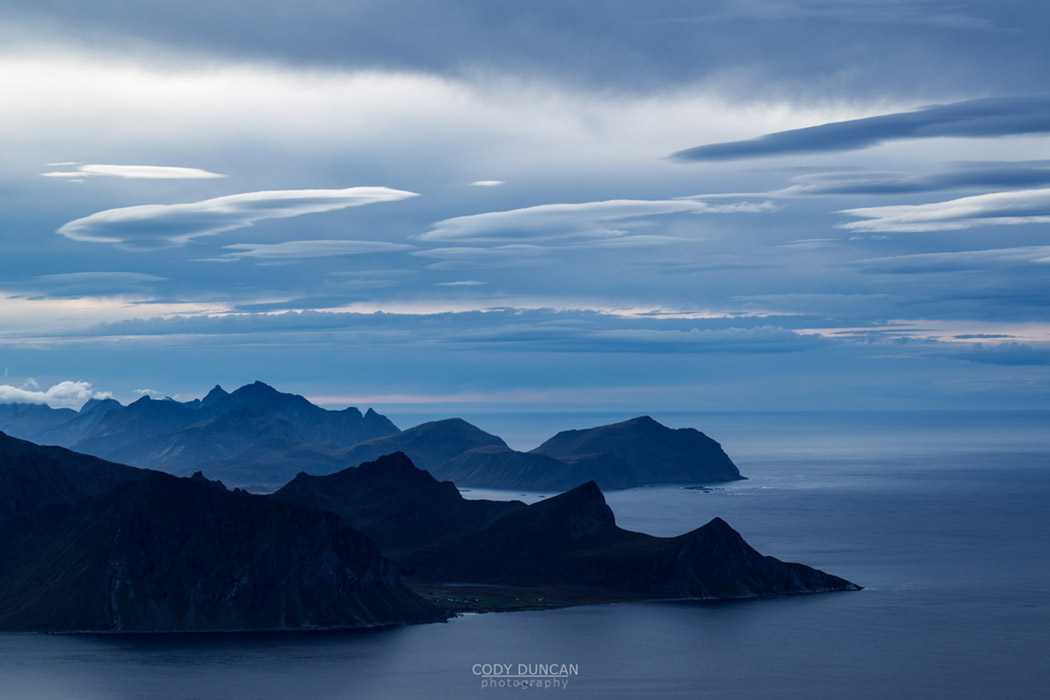 I usually try and save my mountains for when the light is good.  No point in carrying a heavy backpack several thousand vertical feet only to have shit light.  But as the days of Autumn progressed, I seemed to have had some bad timing.  A few days previously, clouds decided to form over Skottind just as I arrived at the summit, and of course they cleared as soon as I was halfway down again.  Now a couple days into October, another unusually mild Autumn day presented itself.  And so I departed Stamsund under nice blue skies and a bright sun, not entirely sure where I was headed, but up something for sure.

As I parked my car at Haukland beach, I could see some high cloud appearing on the horizon and heading in my direction.  Headphones in and some good music blasting out of the Ipod, I set myself a frantic pace as I hit the trail.  I quickly overheated and had to strip down to only a t-shirt, in October!  Higher and higher I ascended, lungs and legs burning while to clouds grew ever nearer to the Autumn sun.

I lost.  By the time reached the 931 meter south summit, barely over an hour after leaving the car, at sea level, the clouds had arrived and the light grew flat.  I met a few soldiers at the top, lucky them, they got to take the elevator inside the mountain.  I half joked if I could catch a ride down and was given a stern ‘No, that won’t be possible.’  I already knew as much, but it was worth a try.  Though I was pleasantly informed that since the radar on the higher north summit was down for maintenance, I was allowed to continue on up there.

The wind blew cold and I didn’t waste too much time hanging around.  While flat light covered the islands, there was at least a bit of interesting light in the sky.  Not the ideal image that I imagined, but not a total loss either.  And all the more reason to head back up again…