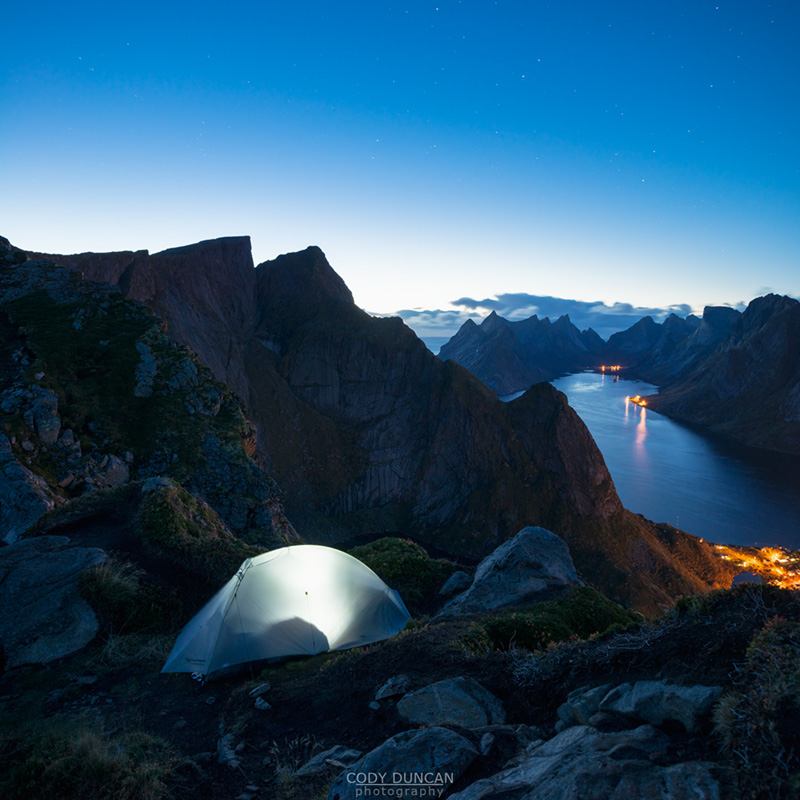 You can read a bit more about what lead me to the summit of Reinebringen on a late September night in my Friday Photo #43 post – but the main idea was for me to camp on top of the mountain in hopes of shooting some Northern Lights.

There is not much room for a tent on the narrow ridge of the mountain, but there is enough.  This was now my 2nd night on Reinebringen, my first being in August 2010 on a perfect Summer day.  This night was was as perfect as Autumn gets; crisp clear skies and a light wind.  Temperatures dropped to a few degrees above freezing, but that is to be expected at the end of September.  Had this been 2009, then I would have been camping in Snow!

I have mentioned elsewhere, that I think it is important to attempt to get new perspectives on an increasingly photographed world.  Over the last couple years I have witnessed an explosion in the amount of photographers on the islands.  But often burdened by huge bags of gear, few seem willing to venture to the top of mountains, and even fewer still, willing to spend a night on top.  It might not always result in award winning images, but you will no doubt get something slightly less common than the previously scenic views which are now overflowing from every photo sharing site on the net.

So, next time you’re on the islands, grab your tent and head up high for a night or two.  There are still thousands of spectacular views which are seldom photographed.

For info on the hiking route to Reinebringen: CLICK HERE 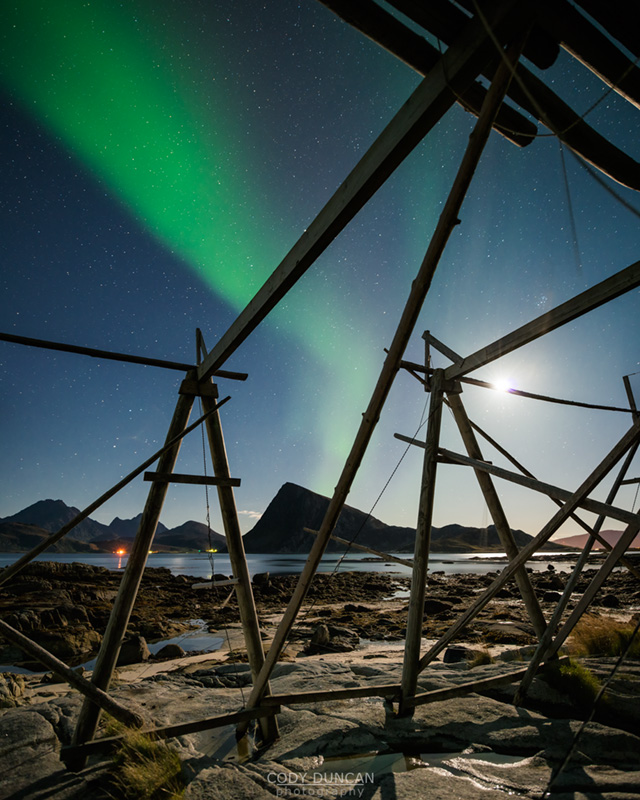 As the aurora that had filled the sky 30 minutes before finally began to lose strength and fade, I took towards looking for a different type of composition.  I will say it bluntly: I prefer northern lights set against a snow covered landscape.  Something about the dry mountains is autumn don’t just feel right to me.  But none the less, such an opportunity is not to be wasted.

I headed out to the coast near Myrland, on the east side of Flakstadøy so as to have as unobstructed view as possible across the sea (Nappstraumen) towards the northeast, where the aurora was the strongest on this particular night.  But after sometime shooting, I wasn’t totally happy with the night.  As I began the journey back to Stamsund, I passed by these stockfish drying racks, sitting empty in the autumn.

The moon was bright and the aurora losing strength so I was somewhat limited in what angles I could shoot.  I tried to find some interesting angles and something to help give a sense of ‘place’ to the image.  I’m not sure how well it works, but at least it is something slightly different.  Had there been a full covering on snow, and no lights in the background, I would probably be quite happy.  Maybe I’ll try and repeat the image in February. 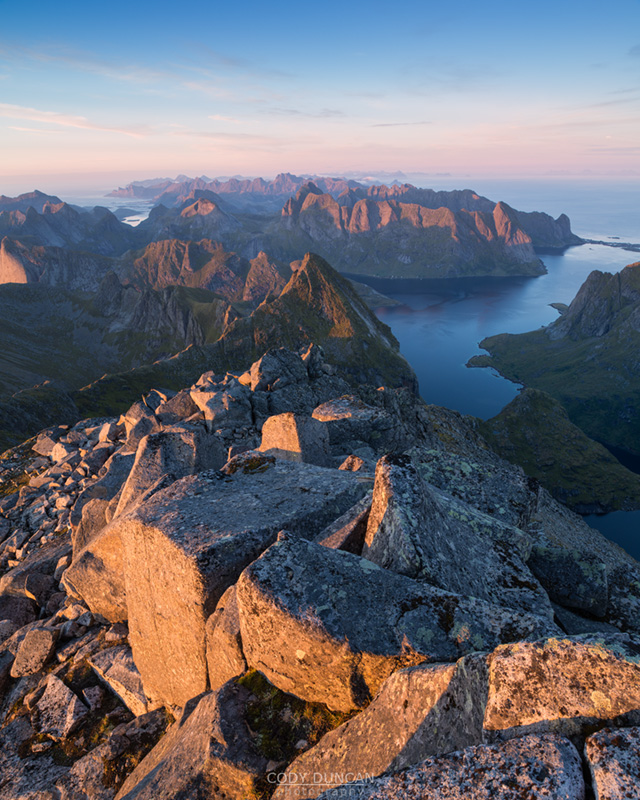 The sky overhead was still blue as I reached the summit of Hermannsdalstinden early on a Friday evening.  Catching the ferry from Reine meant I had a shorter overall distance to travel, but meant that I had to get a later start than if I had hiked via Sørvågen; but this is not of too much importance with the long days of summer.  Though they are quickly shortening by the end of August.

A wall of low cloud hung over the western horizon, so I knew I would lose direct sunlight a bit earlier than I was hoping for.  But in the last moments as the sun neared the sea and began to soften in the thickening layer of haze, the light softened to a gentle glow across the endless line of mountain peaks of Lofoten.

Luckily for me, the summit of Hermannsdalstinden seems almost perfectly made for light light this, with an endless assortment of rocks and boulders providing the photographer with a multitude of foreground subjects with which to compose a photo.  I wandered around a bit, but finally found this vantage point on one of the ridges just below the summit to be one of the better views to balance light and shadow across the rocks. 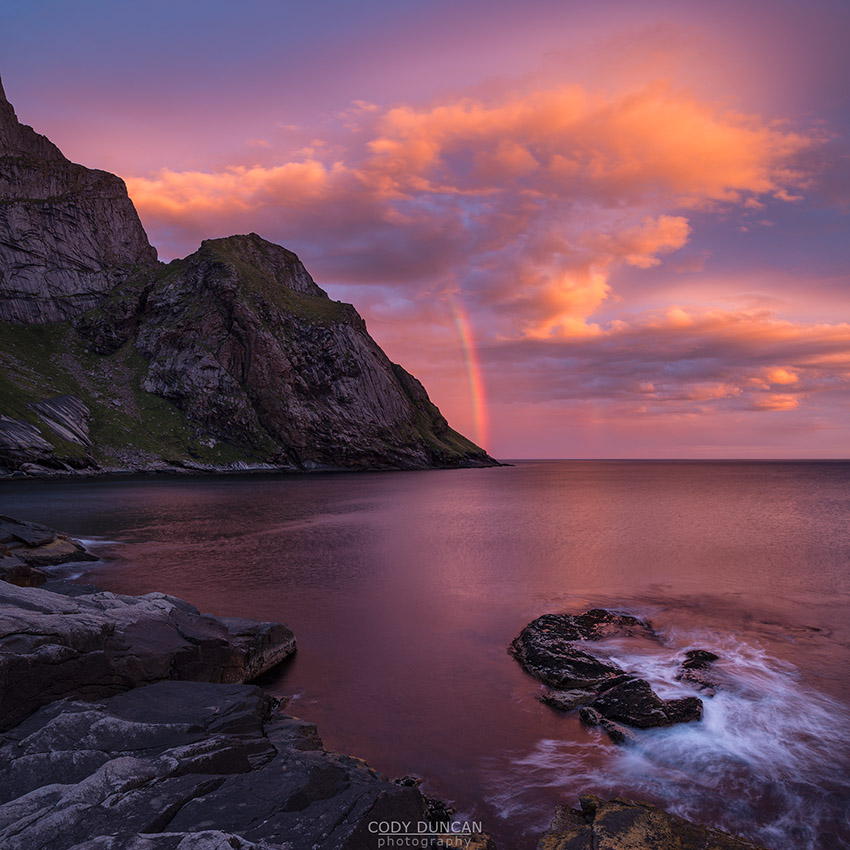 Perhaps one of the best sunrises I have ever photographed on Lofoten, I nearly slept through this one. My second morning on the islands, I was still suffering the effects of jet lag and staying up till midnight the previous night – the short summer nights don’t leave time for much sleep. So when my alarm went off at 3:30am and I drearily peaked my head out from the tent the sky looked somewhat boring, I laid back down.  I know I am on the islands to take photos, but there are times in tiredness where for a fleeting moment, I wouldn’t mind if it were raining.  Then I come to my senses.  Sleep when I die!

A little more time passed before my next alarm sounded and I figured I might as well get out of the tent and see what the morning would provide. By now a small bit of color was beginning to appear in the sky so I hurried out to the beach. The sunrise towards the east was quite nice with some pink glowing clouds filling the sky, but as I passed around a corner on the coast, this came into sight.

The world seemed to be at a standstill, and even the wind was calm.  For 20 minutes, the rainbow slowly drifted out from behind the cliff until the clouds finally faded.  It was one of those lucking moments where a combination of elements all come together at once.

I returned to my tent for a couple hours more sleep before having to pack up camp and hike back to the ferry.  As I was leaving the beach the sky was now a flat grey and a gentle rain began to fall.  A rain that some hours later would see me arrive soaking wet at Horseid beach and forced to hide in my tent for the next 18 hours…

There is now a hiking page for Holandsmelen up on the site.

Holandsmelen is a small, round peak to the north of Leknes on Vestvågøy.  The summit is reached after an easy hike where one is given fantastic views over Vik and Haukland beach.

This will probably be my last hiking update for the next few weeks.  My travels for the year are finally over and I’m heading home to California next week, where it will take me a week or two to get my life reorganized and everything back on track.  The mountains to be added are: Grytdalstind, and Kroktind.

I will also soon add a summer photo gallery, and I must say that after editing through the images, I’ll probably have one of the strongest image collect from any of my trips.  Despite an overall trend of rain for the 2nd half of August, I did manage to be in the right place, right time on several occasions.

On the other hand, I’m not too sure about an Autumn gallery.  Drowning my camera in Sweden, it took me two weeks to receive a replacement, which then left me only 6 days on Lofoten before I left.  While the weather was good and I got lots of hiking in, I’m not sure I achieved the variety of Images that I would like to show.  I’ll see how it goes once I get a bit more editing done.

My next trip to the islands should begin sometime at the end of January or beginning of February. 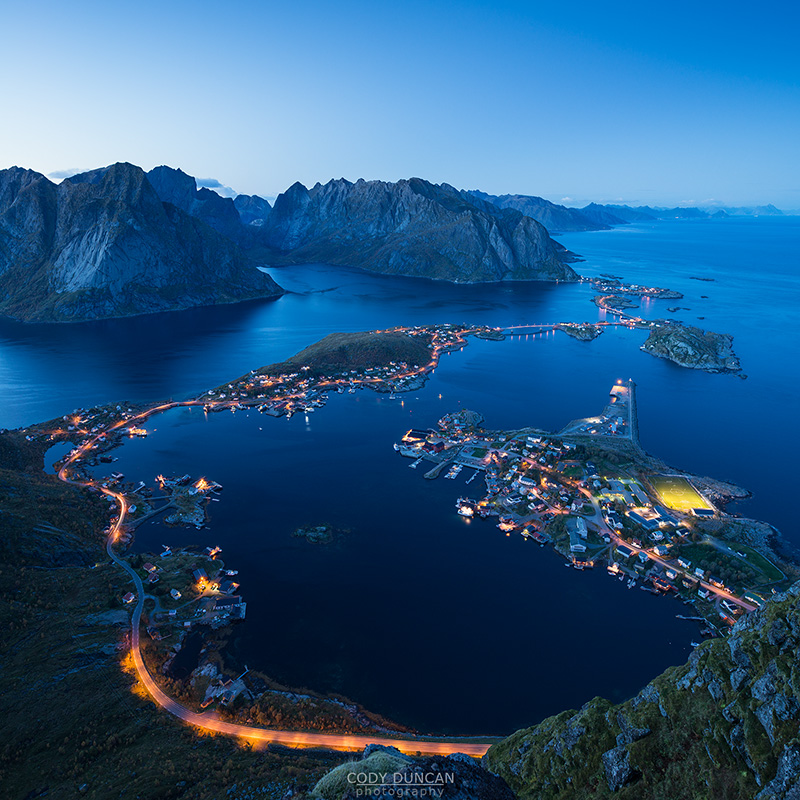