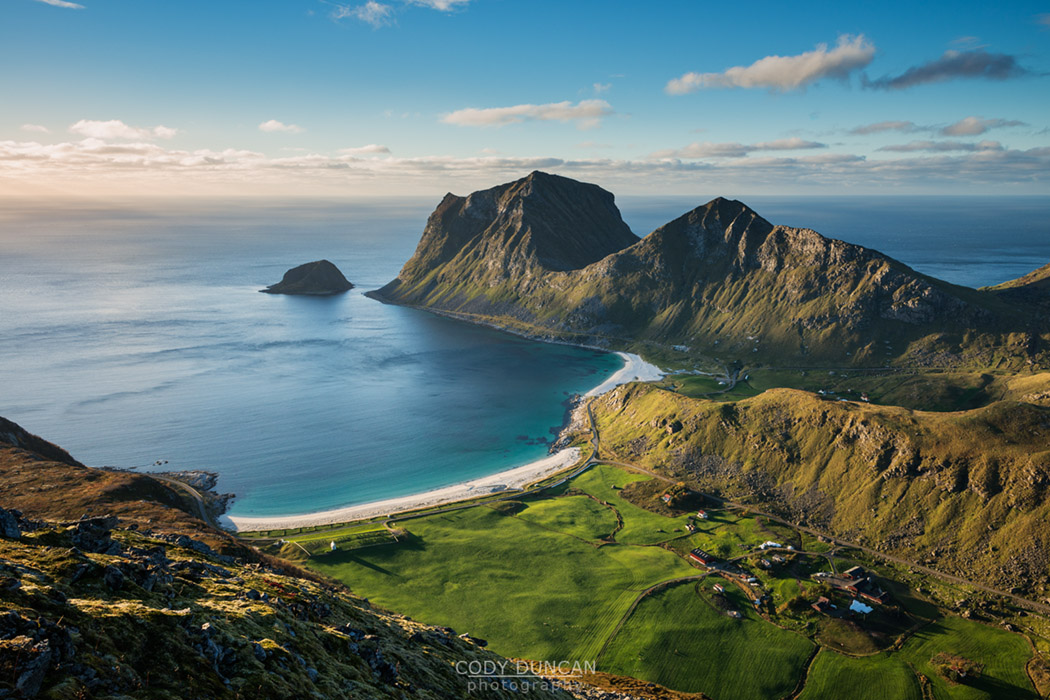 I almost didn’t head up Holandsmelen on this afternoon, preferring to be a bit lazy, as I didn’t get much sleep up on Reinebringen the previous night.  But as the hours of the day passed by, the weather was too good to be wasted just sitting around.  So in mid afternoon I decided to head up Holandsmelen.

I didn’t know anything about the mountain or if the views would be much good.  Rising to the north of Lenkes’ urban sprawl, I knew the views towards the south would probably not be very interesting.  But with close proximity to some of the beaches on Vestvågøy, and looking like an easy hike, why not?

I like to be on mountains for sunset.  But I also like to catch the last traces of daylight, incase it works better for a given location.  Upon leaving Stamsund, I couldn’t see that there was something of a layer of clouds on the northern horizon.  I hike fast, but by the time I reached the summit, the beaches were in and out of shadow as the sun became obscured by the clouds.  I rushed to find a decent composition as quickly as possible to at least get a couple photos with the beach and farm fields illuminated by the ever sinking sun.  Without the light on the beaches and sea, the image loses too much color and contrast, becoming fairly dull and boring.  But I think I arrived just in time for something interesting to appear.

The Landscape photographer in me wants something a bit ‘wilder.’  More nature, less roads and buildings.  But this is Lofoten, people live here.  And so this is actually something of a typical Lofoten scene: man and nature, side by side.  Even the dead (cemetery towards the left) have a nice view!

It’s getting a bit late on a Saturday night and here I sit home alone, putting the final touches on a new design for the website.

There are still a lot of pages to update to the new template, but more or less everything should be up an running as normal.  A few images will be missing, and I still need to make a few decisions about the overall layout, but it’s been a long day, and no one is paying me to do this, so I’ll hopefully finish everything within the next week or so.

I was never quite happy with the old design.  It was OK, but not great, and I had to make a few compromises in certain places.  This new template should let me add a bit more functionality and intuitiveness to the site: ie, I can better sort the drop-down menus.  It is also much more mobile friendly than my last design, so if you’re on the islands an looking for info on your phone, everything should function a lot better.

If you notice any bugs or errors that shouldn’t be, please leave a comment and let me know!

Or, if there is something you would like to see added to the side, also feel free to let me know.  I’m always up for suggestions…

Photo: The most iconic image of the Lofoten Islands: Reine from the summit of Reinebringen, Moskenesøy, Lofoten Islands, Norway.  September 26, 2013.  09:10

I post this weeks Friday Photo to help illustrate the importance of time of day and direction of light on the Lofoten Islands.  Something which becomes even more important as you travel further away from midsummer and the sun sinks lower and lower on the horizon.

Even in this photo, taken at 09:10 in the morning, you can begin to see the mountain shadow approaching from the left of the image.  Soon, parts of Reine will be cast in shadow for the remainder of the day, the sun failing to rise above the surrounding mountains.

So with the fjord at Reine opening up towards the southeast, if you want direct light shining across the entirety of the village(s), then this means you need to be up the mountain not too long after sunrise.  Though accounting for time of year, in summer, the sun rises more to the northeast, so you’ll be able to take your time.  Whereas once the autumnal equinox is reached, with the sun rising to the east, you will find yourself hiking up the mountain in the dark – or, if you’re like me, camping on top, which is easier. 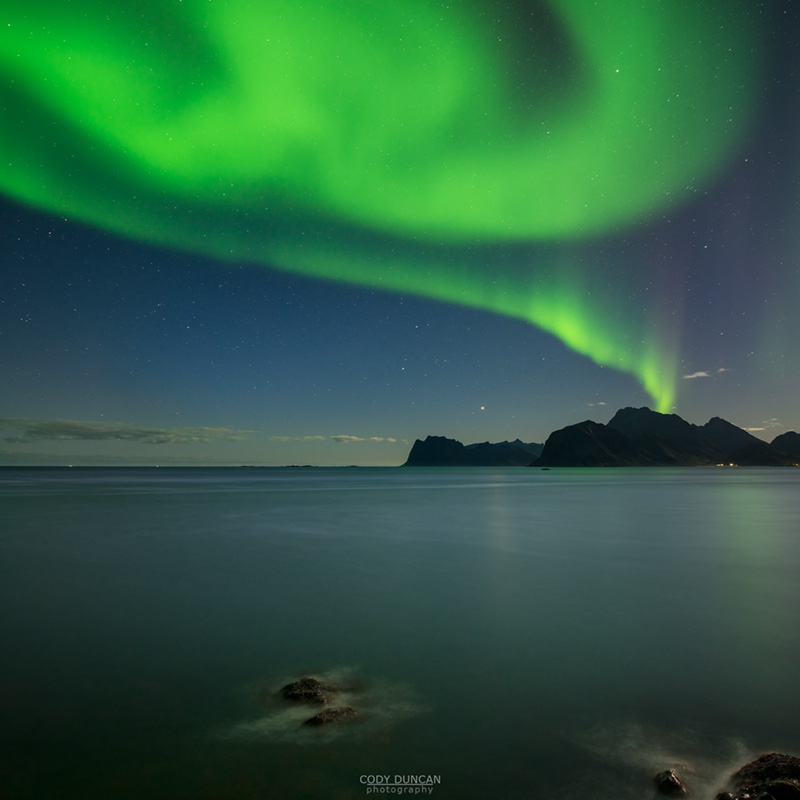 After waiting two weeks for a new Nikon D800 camera to arrive, having dropped dropped it in a lake in Sweden, I lucked out at had a good display of Northern Lights on my first night back in action.  There had been some good displays in the previous weeks, but this was the best thus far, and I would have probably been quite grumpy had my camera arrived the following morning.

The main element I find missing while shooting the Northern Lights in autumn is snow.  There is just something a little less magical, but perhaps that’s just me.  It can also be a bit of a struggle sometimes to get yourself away from any coastal lights, as pretty much the whole population of Lofoten is on the coast.  And then, with the unpredictability of where the Northern Lights will actually appear in the sky (if they do at all), you often have to take a gamble on a composition that may or may not come into form.

This shot was my backup location.  I had originally intended to shoot from the beach at Myrland, giving me a nice clean view across to Vestvågøy, but the lights where too high in the sky to include both beach and Auroras in the image.  So I quickly hopped back in the car  and headed back down the road a way to a location where I had a slightly better overall composition.

I still think the empty sea is a little on the boring side, but at least the Aurora seems to be emerging from the summit of Himmeltindan, the highest mountain on Vestvågøy, so that kind of makes the image work for me.

Another think of note.  This image is from a night with a nearly full moon.  I often see the (incorrect) opinion floating around the internet that you need a moonless sky to see the Northern Lights.  This is simply not true.  And if fact, I think having some moonlight, to help illuminate the foreground, especially with winter snow, actually makes for a better image. 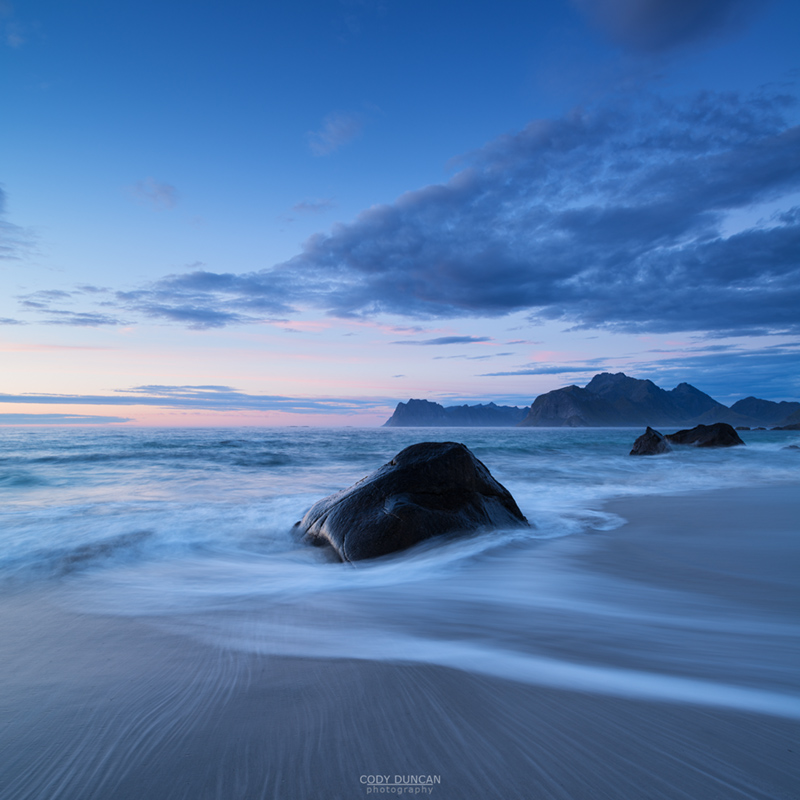 Formerly, the beach at Myrland was a place I only visited on rare occasions.  But in the last year, perhaps because I have grown tired of some of the other beaches, I have often found myself walking on its sands.  Or perhaps it is a more fitting location for Spring and late Summer, with the location of the sun setting in the sea.  I don’t kno

Two days after my sprained ankle at Kvalvika beach, I was limited to where I could go.  The light was promising and the day had been a fine one.  I would have climbed a mountain where it possible, but I was still resorting to hobbling around and using one of my trekking poles as a makeshift crutch.

One of the reasons I like the beach at Myrland is that there are large, isolated boulders in the tide line.  This gives the beach a multitude of subjects to use for foreground elements in what would be an otherwise somewhat boring photo.  I think it is now my new favorite beach…