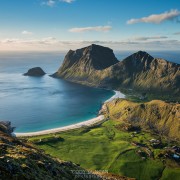 I almost didn’t head up Holandsmelen on this afternoon, preferring to be a bit lazy, as I didn’t get much sleep up on Reinebringen the previous night.  But as the hours of the day passed by, the weather was too good to be wasted just sitting around.  So in mid afternoon I decided to head up Holandsmelen.

I didn’t know anything about the mountain or if the views would be much good.  Rising to the north of Lenkes’ urban sprawl, I knew the views towards the south would probably not be very interesting.  But with close proximity to some of the beaches on Vestvågøy, and looking like an easy hike, why not?

I like to be on mountains for sunset.  But I also like to catch the last traces of daylight, incase it works better for a given location.  Upon leaving Stamsund, I couldn’t see that there was something of a layer of clouds on the northern horizon.  I hike fast, but by the time I reached the summit, the beaches were in and out of shadow as the sun became obscured by the clouds.  I rushed to find a decent composition as quickly as possible to at least get a couple photos with the beach and farm fields illuminated by the ever sinking sun.  Without the light on the beaches and sea, the image loses too much color and contrast, becoming fairly dull and boring.  But I think I arrived just in time for something interesting to appear.

The Landscape photographer in me wants something a bit ‘wilder.’  More nature, less roads and buildings.  But this is Lofoten, people live here.  And so this is actually something of a typical Lofoten scene: man and nature, side by side.  Even the dead (cemetery towards the left) have a nice view!