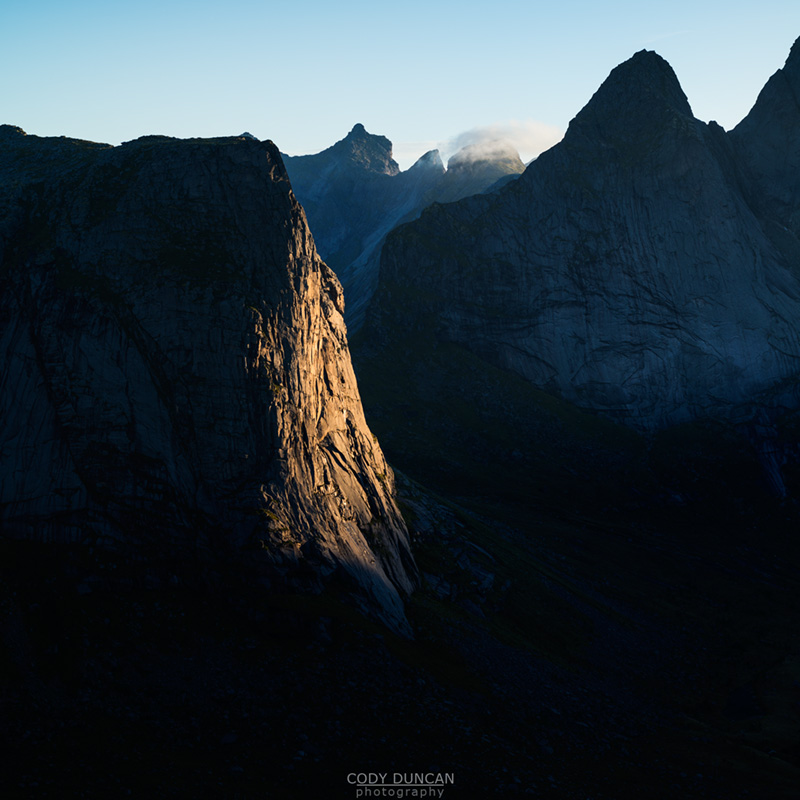 Even while camping high in the mountains, it is easy to end up in a place where you will not see any sun until it is well above the horizon.  Though sometimes you get at least a little lucky in the light you are provided.

Having camped about 2/3 the way up Helvetestinden on my first day on the islands in August 2013, I was barely able to rise out of bed in the early morning.  Though while the sky overhead glowed with the arriving day, I remained deep in the shadows of surrounding peaks.  So I went back to bed for a couple hours, like any lazy photographer would do.

Awaking sometime later to blue sky overhead, I was still in the shadows of mountains.  Yet the sun was breaking through the surrounding peaks in one place, shining bright on the near vertical granite cliffs of Merrastind.

I’m not sure how many days per year this light exists, but I’m glad enough I was there at this time.  While I wish there was a little more going on in the sky, I still like this image for the simplicity of the elements.

The light on Lofoten is not always magical and quite often you’ll have to make due with much less than ideal conditions. This day in particular had been dull and flat, low clouds casting near contrast-less gray light over the land.  One of those days where I tend to drive in circles looking for something, yet often find nothing.

But Lofoten, particularly in winter, is more than glowing pink mountains and amazing sunsets.  The islands are often bleak, weary, and forlorn.  Skipping these moments means missing out on what the islands really are, while not always visually spectacular, the islands have more depth than the idealized illusion of them which we see posted all across the internet. 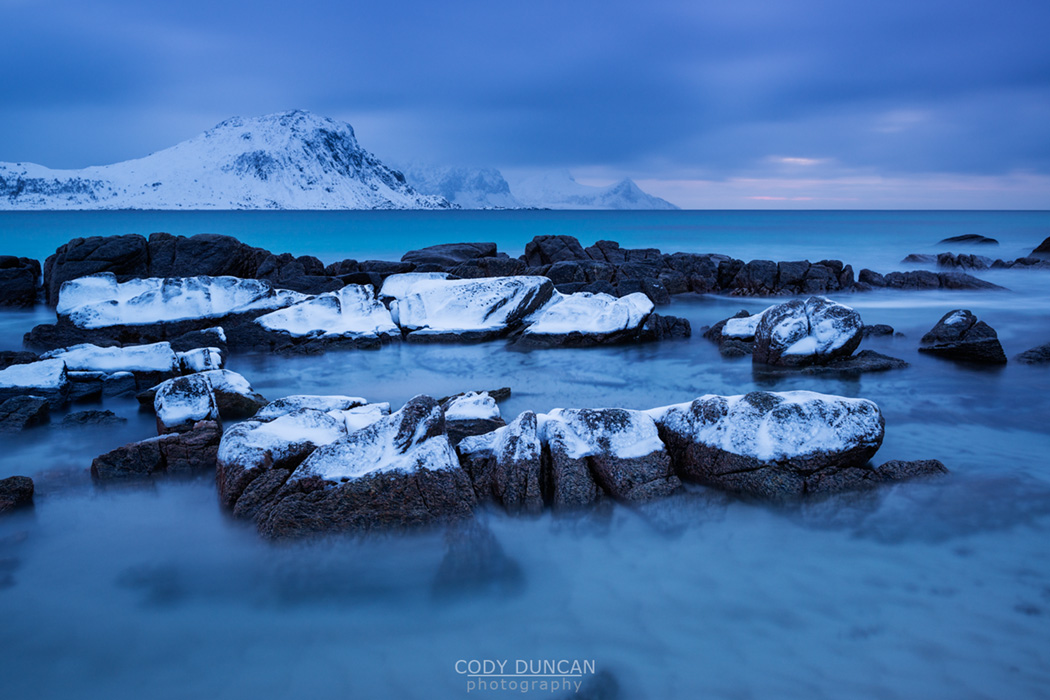 I’m not quite sure what it is, but I often find myself to focus on certain places on any given trip to Lofoten.  In the past, I have driven past Vik beach quite literally dozens of times, yet never stopped to take a photo.  However in February 2013, I seemed to be photographing at Vik nearly every other day.  I’m not sure if it has anything to do with a particular location being more ‘in condition’ than other areas, or that I’ve just grown weary of other places over the years and look for something new.

Anyhow, while passing Vik on the way to camp at Utakleiv for the night I came across this scene.  It had been cold for several days and a few lights snows had fallen.  Had the ice on the rocks not been present, then I probably would have driven straight by this scene.  And while I feel the balance of the image is a bit off, I like the contrast of the white ice against the blue water, helping to and depth, and cold, to the image.