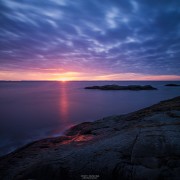 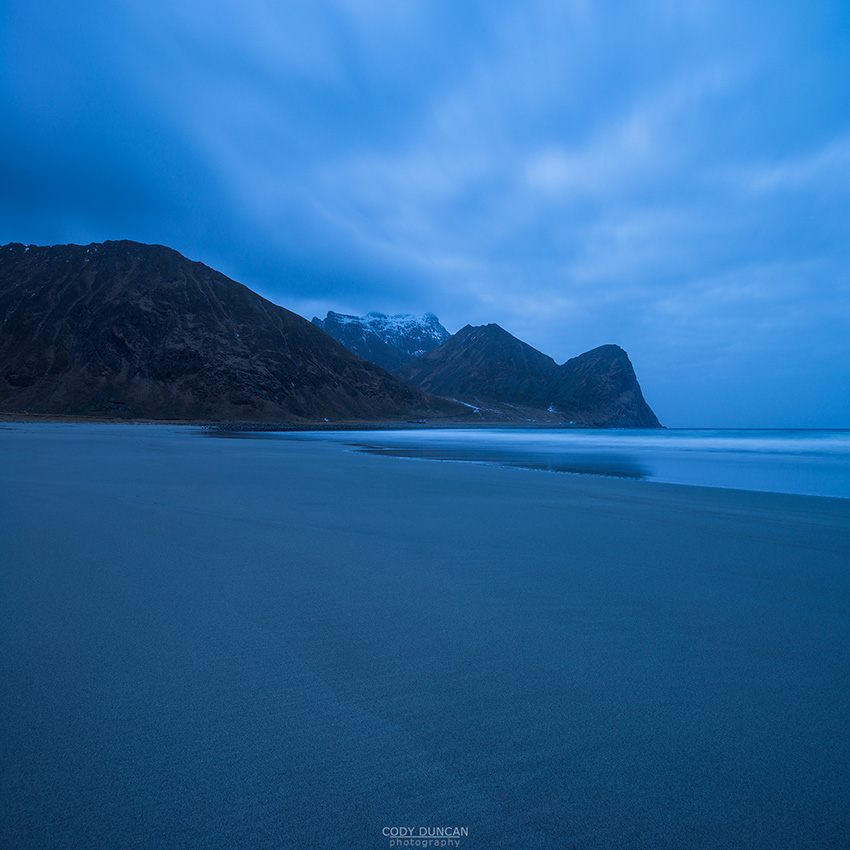 Morning was slow to come.  After midnight had gone, time seemed to come to a standstill.  And though it seemed like hours had passed between looking at my watch, it was only minutes.  02:00 am, 03:00 am, 04:00 am; still 4 hours until dawn appeared.  The storm was calming now, but I knew I wouldn’t have much of interest to look forward to come first light, only a reason not to be laying down in my sleeping bag.

A few more hours passed until I could finally see a heavy, misty grey dawn appearing over the beach.  I dressed and wandered down to the empty sands of Unstad beach.  The fury of yesterdays storm had passed and barely a hint of breeze blew against my face.

Sometime later I returned to my car for breakfast: an orange, some rice cakes, and chocolate, for the cold.  I sat for a while, waiting to see if any colour would appear.  But after sunrise had passed, I was gone.

I could tell it was going to be one of those days of soft, flat light.  I visited a few beaches and wandered around some hills, following an ice river up into the mountains.  And so the hours passed as I made my way west to Flakstadøy, where I noticed a bit of color beginning to appear.  Not much, but something other than grey.

Looking for a place to camp, I headed down a small dirt road on the outskirts of Ramberg which took me out to the coast.  I noticed a good supply of wood which I thought could be turned into a decent campfire for the night and so I messaged my Italian friends to see if they wanted to join me.  A little while later they showed up and we set to making a fire.  Though it turns out I was slightly optimistic in my estimates of the wood, which was either too small and burned quickly, or too old and rotten, barely burning at all.  But at least it was a mild night, for February, so it wash’t too bad to sit around and have some light in the darkness, even if the heat was lacking.  Not to mention, it was a good excuse not to go to sleep in mid afternoon.

I was wanting to shoot something around Flakstad for sunrise, but pulling my car out onto the E10 and a quick survey of Skagsanden beach, it was evident that another grey day was in store for the islands.  So I headed further west, and back towards Reine, where I would have a direct view of the sun rising on the horizon.

I got stopped by the road works that have been going on for what seems like forever on the eastern part of Moskenesøy.  Originally what started out as just a new tunnel had turned more or less into a whole new road, tediously blasted, dug, and scraped into the rock. So there I sat, watching dawn approach over the Vestfjord and not knowing how long I would be stuck.  I even gave though to hopping out of the car and just shooting on the side of the road, but figured it might not be the best idea.  Time to sit and eat breakfast I guess, rice cakes and chocolate, for the cold.

Finally, after 20 plus minutes I was let free and on my way west again.  Dawn was near as pink began to fill the sky in the small gap along the horizon and into the ceiling of low clouds overhead.  Nearing Hamnøy I figured the sun would rise any minute and so I got out of the car and looked around.

I was hoping for a nice pink glow on Olstind, rising across the still waters of the fjord, but the horizon seemed to be a bit cloudy, and only a faint light reached the mountain.  Looking back over the Vestfjord as the sun cracked the horizon was about the only thing of interest, though not especially so from my vantage point.

Soon the sun was back in the clouds and I was counting the hours until darkness, where I could attempt to sleep again, to pass the time quicker.  I parked my car in the turnout by Djupfjord and began the wait.

Morning arrived with more low, misty clouds, but I could tell a bit of a change from the last few days would happen.  I mostly stuck around Reine and Å, waiting for the hours to pass.  I could see winter storms passing over the mainland in the distance, but for some reason none arrived on Lofoten.  In late afternoon I headed out to Å and by chance ran into some German acquaintances.  Lofoten can be a small place sometimes.

A final kiss of pink in the sky over Værøy and the day was soon gone.  My first week on the islands was now over.  In the morning, I would head back to Stamsund, where I would meet up with the Australians and be their unofficial Lofoten tour guide for the next 10 days. 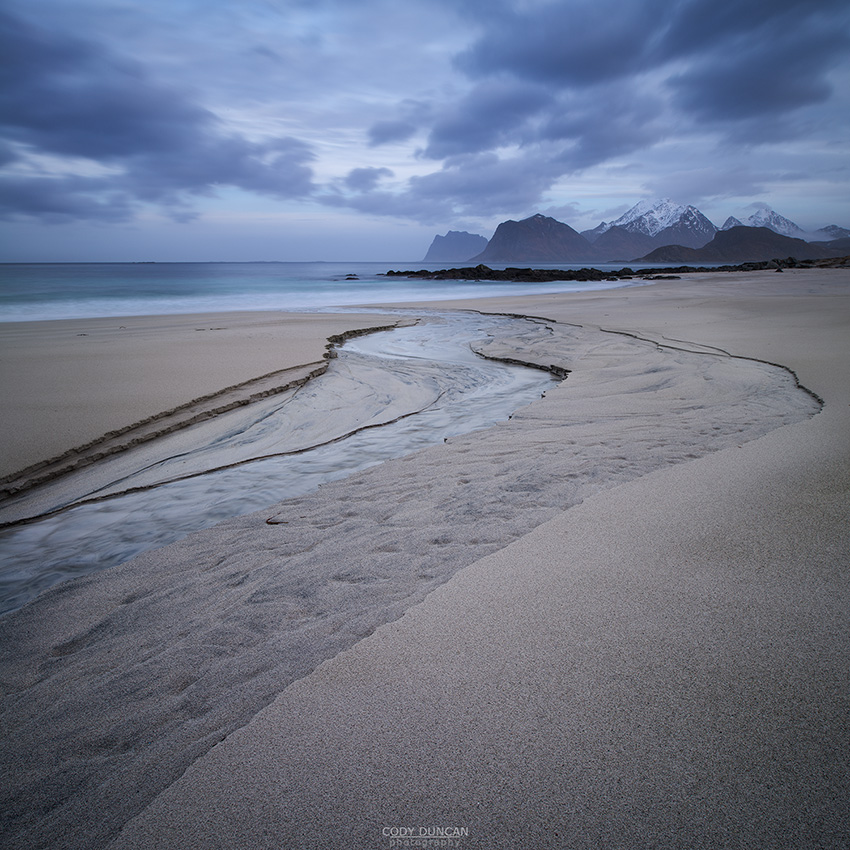 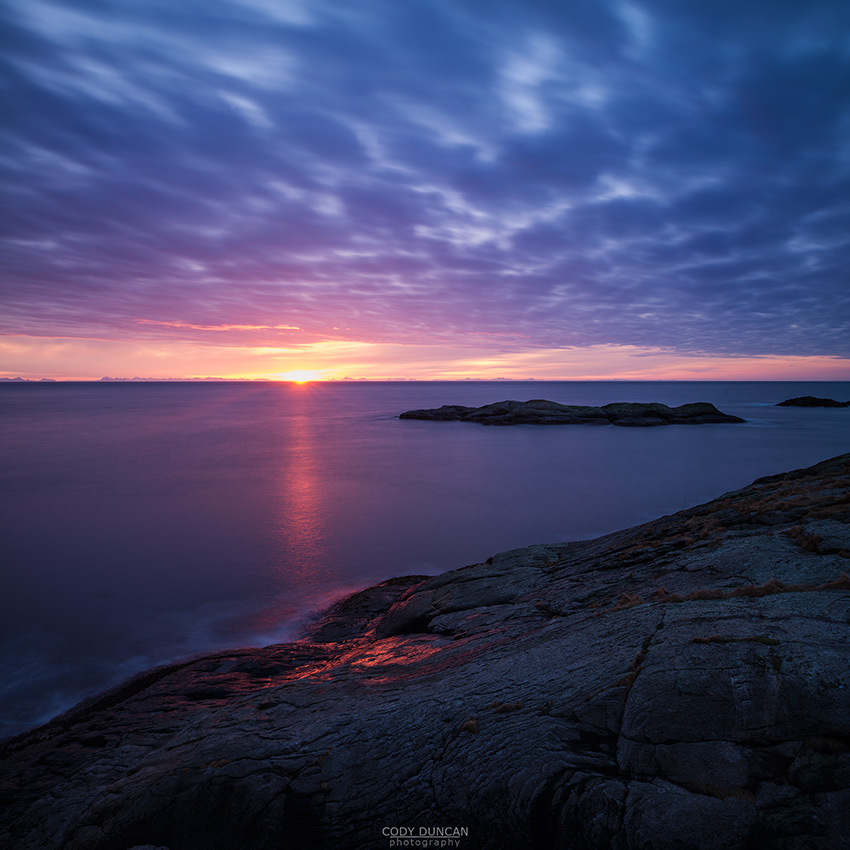 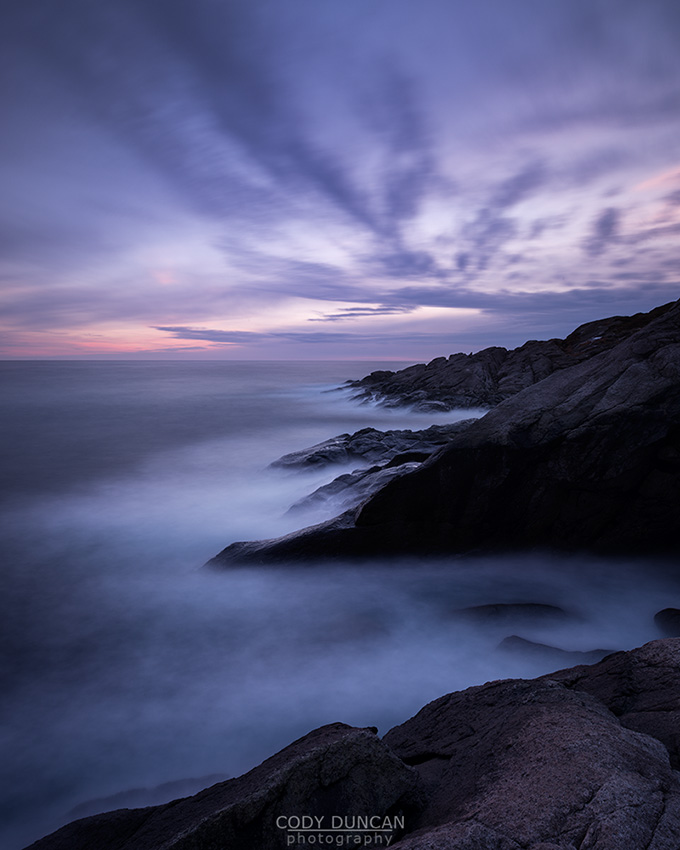