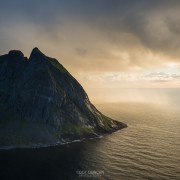 This photo is from almost exactly a year earlier that last week’s image, taken during my first hike up Ryten.  I actually hadn’t really planned, nor prepared to hike up the mountain, but when I was a little way up the trail from Kvalvika, a young German guy (the only other person camping at Kvalvika that night) asked me if I was interested in going up the mountain.  Standing there only in a light fleece, no rain jacket, no water, no food, no gloves.  My answer was obviously yes.

The weather looked good enough as we set off up the hill.  But upon reaching the approximately half way point, this nice little cloud appeared from behind Kjerringa.  A little further up the mountain it caught up with us.  Heavy, cold drops of rain which quickly soaked through my fleece.  We ran to the largest boulder we could find and did our best to shelter from the rain, which was also falling quite sideways, thankfully.

As the rain passed a brilliant rainbow soon formed over the land, which was now golden in the low evening sun.  Cold and wet, I remained on the summit until sunset.  One of my most memorable days on Lofoten.