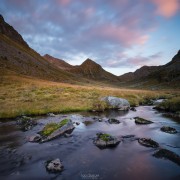 The river Nordalselva flows through Nordal valley before rising into the triangular peak of Grytdalstind.  Only a short walk from Unstad, it feels completely wild here, with few signs that anyone has passed this way before you.

It had been an afternoon hiking and exploring, ending on the 534 meter, and quite exposed, summit of Grytdalstind.  Getting lost on the numerous sheep trails during the descent, we lost a fair amount of time going cross country through the landscape.  Normally this is fairly simple on Lofoten, but this area seemed to be especially rocky and with a few forests of dwarf birch to precariously navigate.

We were exiting the valley just as the last light was shining over the summit of Grytdalstind.  I tried to find a good composition, but was too late in the quickly fading light.  So I continued to hike on until I reached one of the crossings of the Nordalselva and thought it would make an interesting enough photo.  I crossed the river and headed back up the other side until I reached a wider section, and I place I could get to without sinking in bog.

Had I been here about 20 minutes earlier, it would have no doubt been a much more dramatic photo.  But I think the scene here is interesting enough to represent the end of a nice autumn day in the mountains of Lofoten.