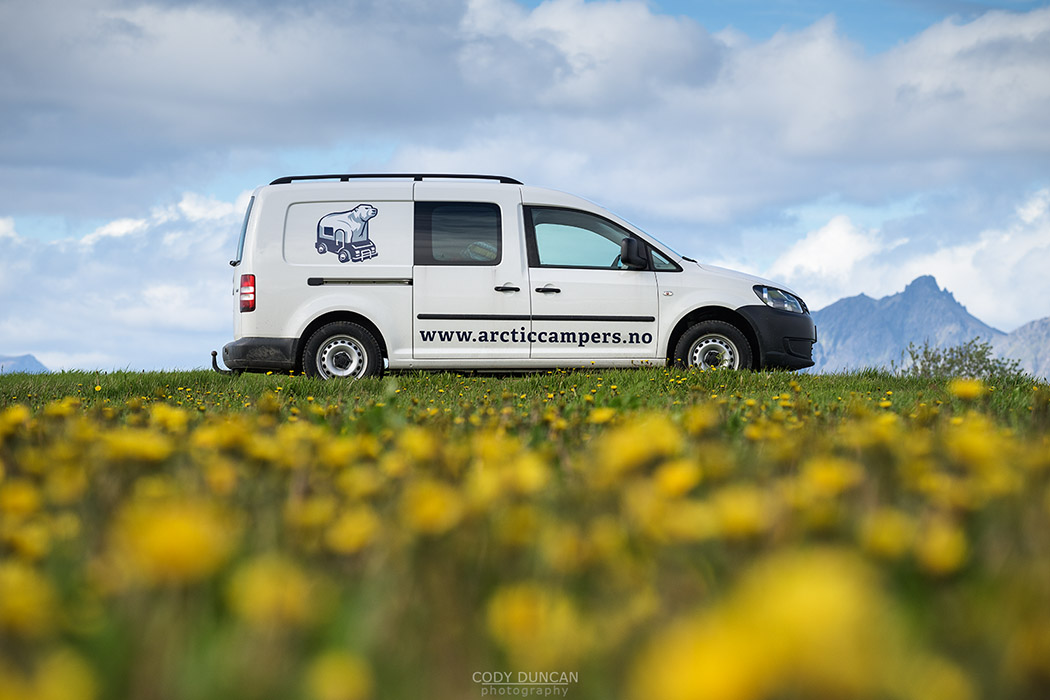 While preparing for my June trip to Lofoten to grab a couple last photos for my eBook, I decided to get in contact with a new company renting out camper vans on the Islands: Arctic Campers. I often try and promote the flexibility of sleeping in a car while on Lofoten and also giving support to the local companies on the Islands, so it is good to see camper vans now added to the travel options.

And quite frankly, I’m really surprised it has taken this long. Some of you might know, that at the start of my travels 10 years ago, I spent my first year living in a van in New Zealand, where camper vans were one of the most popular forms of transport – I bought my own, but there were many rentals available as well.

Though Arctic Campers have a couple different models available, I used one of their VW Caddys – the Comfort Camper. Sleeping two (all bedding included) on a comfortable bed platform with plenty of gear storage underneath, the van also included free Wifi, a fridge, 2 stoves + cookware, water and sink area, a table and chairs. For those of you worried about cold, the vans are all equipped with heaters, strong enough to keep the vans toasty even in winter while you’re hunting for northern lights. 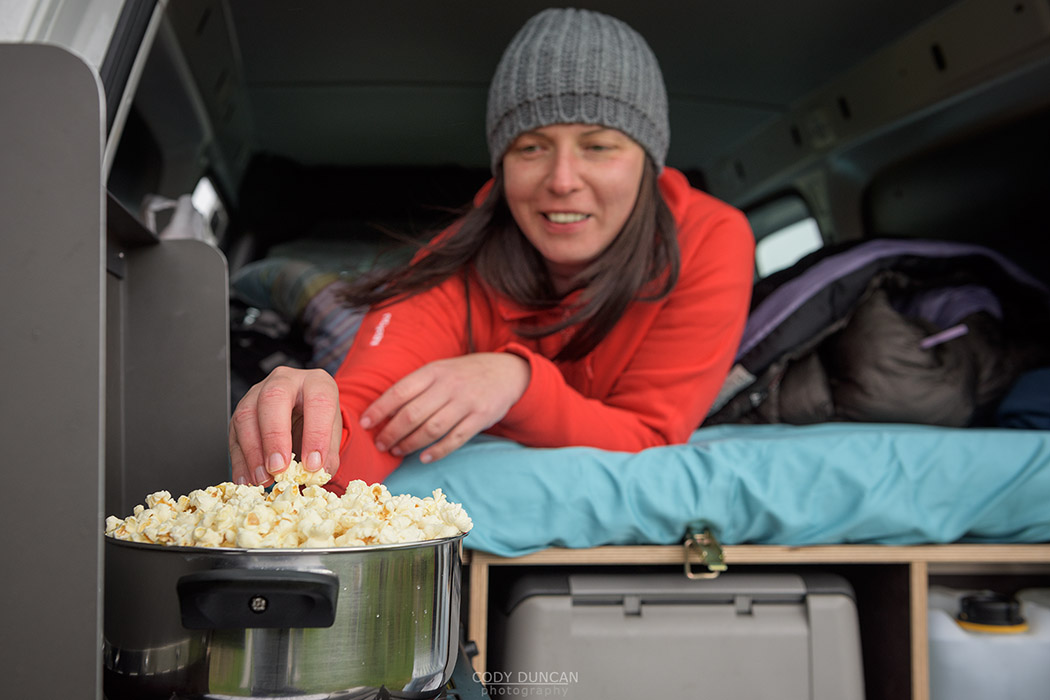 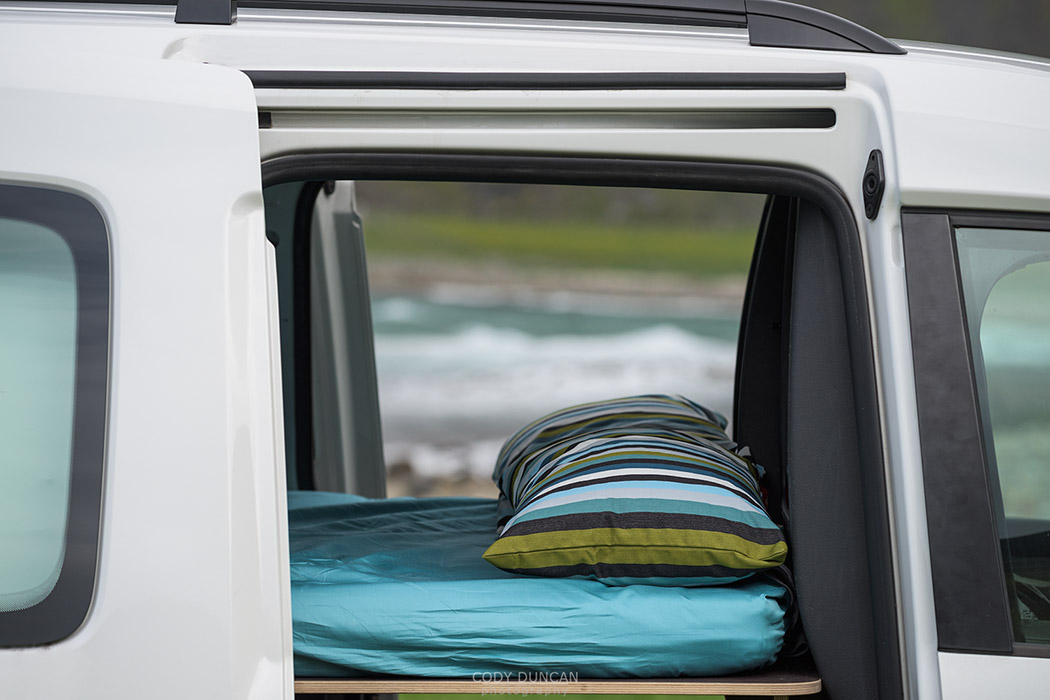 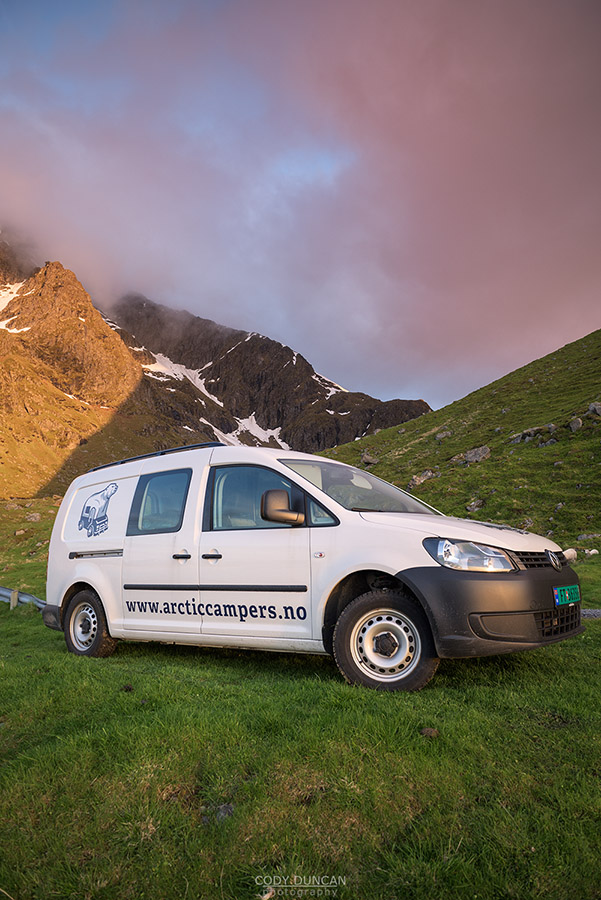 Disclosure: I was given a modest discount for the week I rented my van so I could have the opportunity to test it out for future usage. All opinions my own as always. 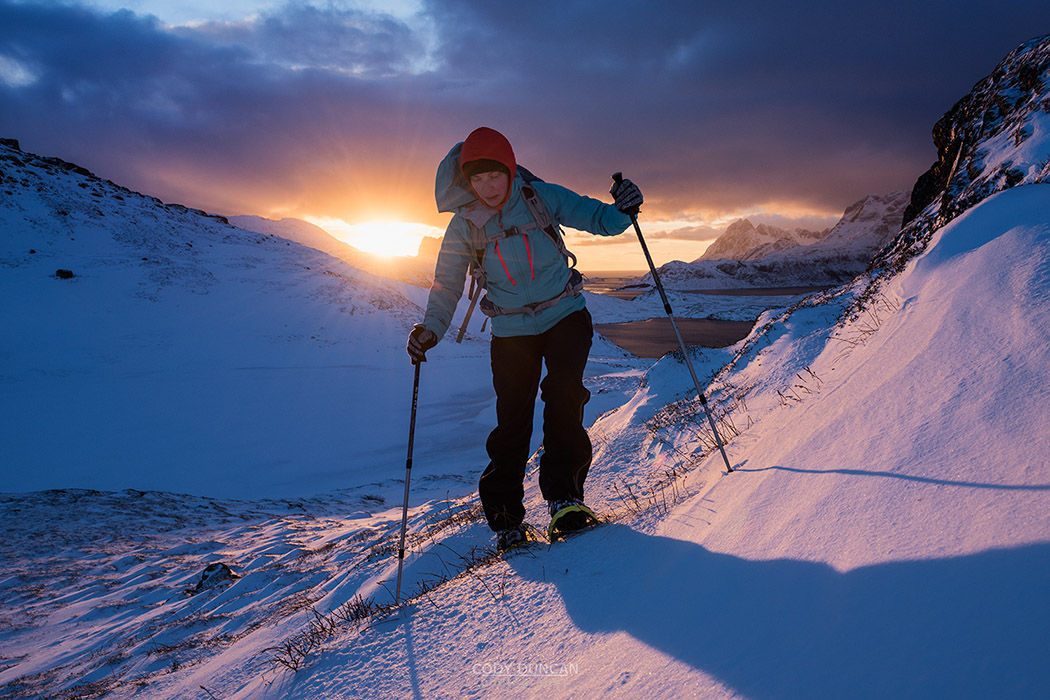 Though the forecast showed calm winds, I could tell the clouds were moving across the mountain peaks a bit faster than I wanted.  Even so, I tried to be optimistic about things and packed up my camping gear for the night.  The goal: A night camping near the summit of Ryten.

A short while into the hike and after the first little climb I rounded a corner and saw the magnificent light of the sun shining across the snow through a hole in the clouds.  Luckily, the light lasted longer than I expected and I was able to capture a few different compositions.  I think this image captures the mood of the day quite well.

Later, upon reaching the top Ryten, the wind was so strong that I could barely stand up or talk. The plans for camping were obviously off, so we headed back to the car. I wish I would have carried a lighter backpack all day, but good exercise I guess!

Filmed during a two week sailing along the Norwegian coast from Tromsø to the Lofoten Islands in August and September 2014. The trip was run by Vertical Shot Expeditions.

Some of you may have noticed that I added a video page to the site a few days back.  I have been shooting a fair amount of video + timelapse footage on Lofoten and elsewhere over the last couple years, yet up to this point, I haven’t really had time to put anything together.  And while I’m still new at editing and learning the programs (so don’t expect anything super fancy!), I think I will be nice to share another perspective of the Islands beyond just photos.

I’m also going to let the video branch out a bit beyond Lofoten, but they will still be limited to all things north and bad weather. Keep an eye out for some exciting stuff to come over the following months.

You can see my image gallery from the trip HERE.

I’m super happy to announce that the second eBook in my ‘Seasons on Lofoten’ series is now available: Seasons On Lofoten – Summer

Building upon the same theme as the Winter edition, Seasons On Lofoten – Summer is a photography and travel guide focused on the Specifics of the summer season on the Islands.  Also included is the info for 6 of my favorite hikes and camping locations on Lofoten: Bunes beach, Horseid beach, Kvalvika beach, Ryten, Reinebringen, and Mannen. 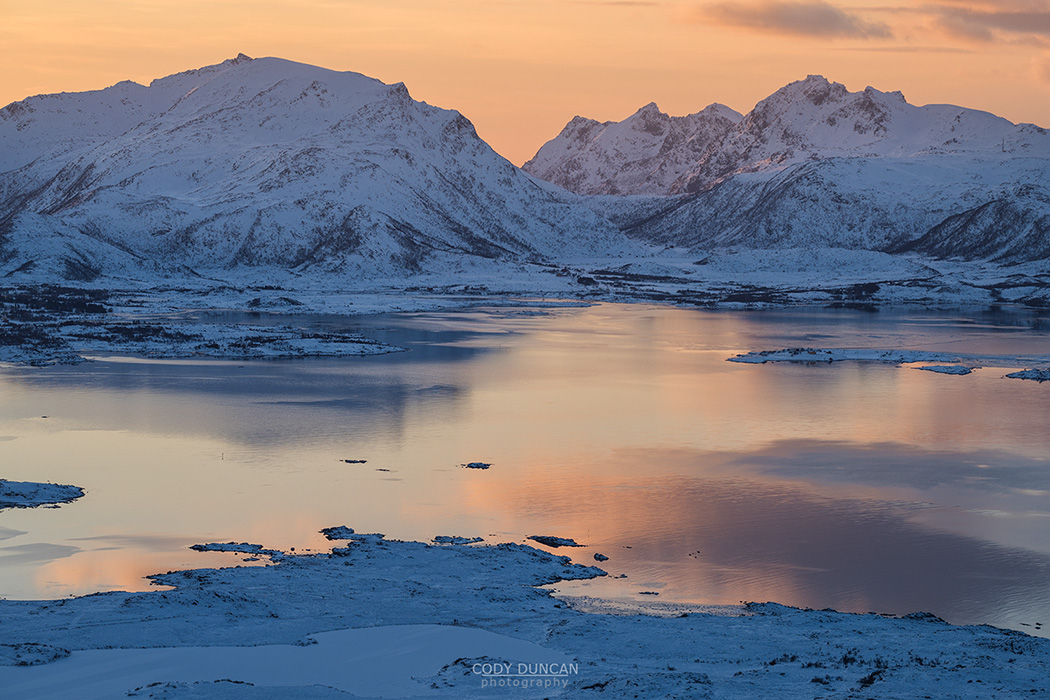 With another one of mid January’s fantastic winter days, and the day after I hiked up Offersøykammen, I found myself a bit bored again, so I headed up Hoven, a small mountain on Gimsøy.

Luckily, I again had a few footprints in the snow to follow, taking away any difficulties in winter navigation. Though even in winter, Hoven is a relatively straight forward and simple hike, it’s always nicer to have a path to follow, if only to save on time.

By the time I reached the summit I was down to a t-shirt – so much for arctic circle in the heart of winter!  But a moderate breeze was blowing, so I quickly returned to a down jacket once I stopped moving and started shooting.

The southern sky, with the noon sun low on the horizon was glowing a bright orange.  At this time of year, the sun is so low in the sky that only southern facing aspects of the islands receive any direct sunlight, and that’s only if their not blocked by any mountains.

I liked the reflection in the water below, and the contrast between the cool blues of the snow and the warm sky. 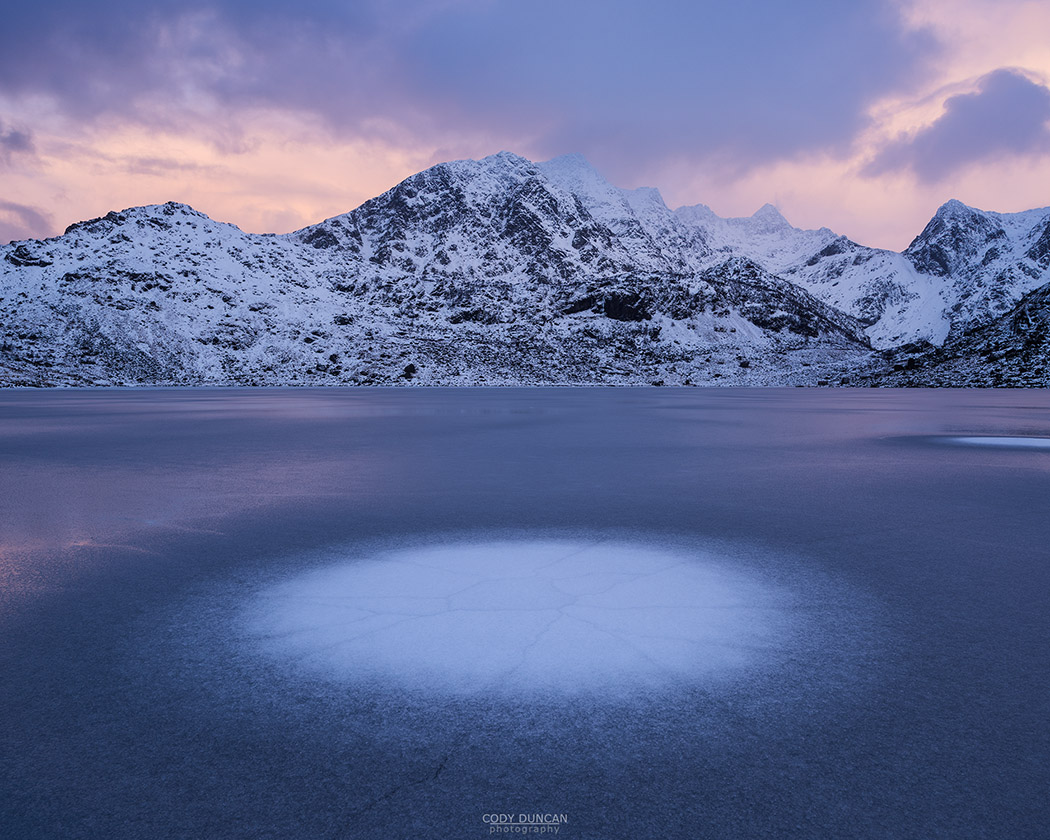 A somewhat mild winter, temperature wise, left many of Lofoten’s lakes still unfrozen or only partially frozen at the end of January.  Lakes that I had stood in the middle of at the same time in previous years were now no-go zones, unless I was looking for a cold swim.

But in this gentle balance of freezing and thawing, unique patters and shapes can form which give a bit of detail to a scene.  In this case, there was a rock just beneath the thin layer of lake ice which kept the nights snow from melting.

The snow circle was a few meters into the lake.  I tried to get as close as possible, and still being close to the shore, the water wasn’t that deep, but I didn’t want to risk breaking through.  So I pushed my camera and tripod out as far as my arms could reach, the ice making creaking sounds with every movement, so I could get something of a decent composition. 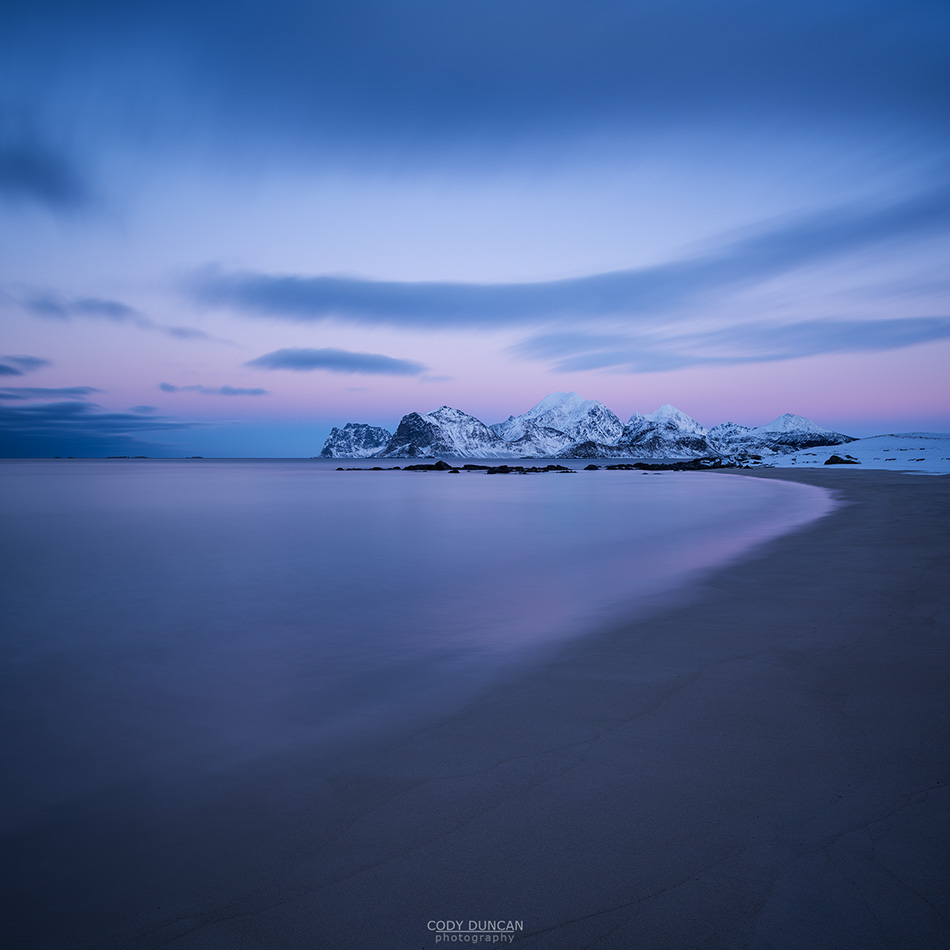 I had shot Storsandnes in fantastic light at dusk on the previous evening, yet as the light began to fade on this day, something drew me back here again.

The light was similar to the previous afternoon with the soft pinks and blues as the earth’s shadow passes through the sky prior to the arrival of night.  But there were some gently moving clouds beginning to appear, something to add balance to the sky.

Though this image is fairly similar to several others that I have taken at Storsandnes, there is something more interesting here than in any of the others.  I’m not sure if it’s the simplicity of the composition or the subtleness of the color, but it is one of my favorite images from the winter of 2015.