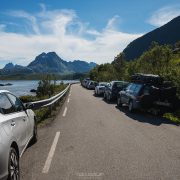 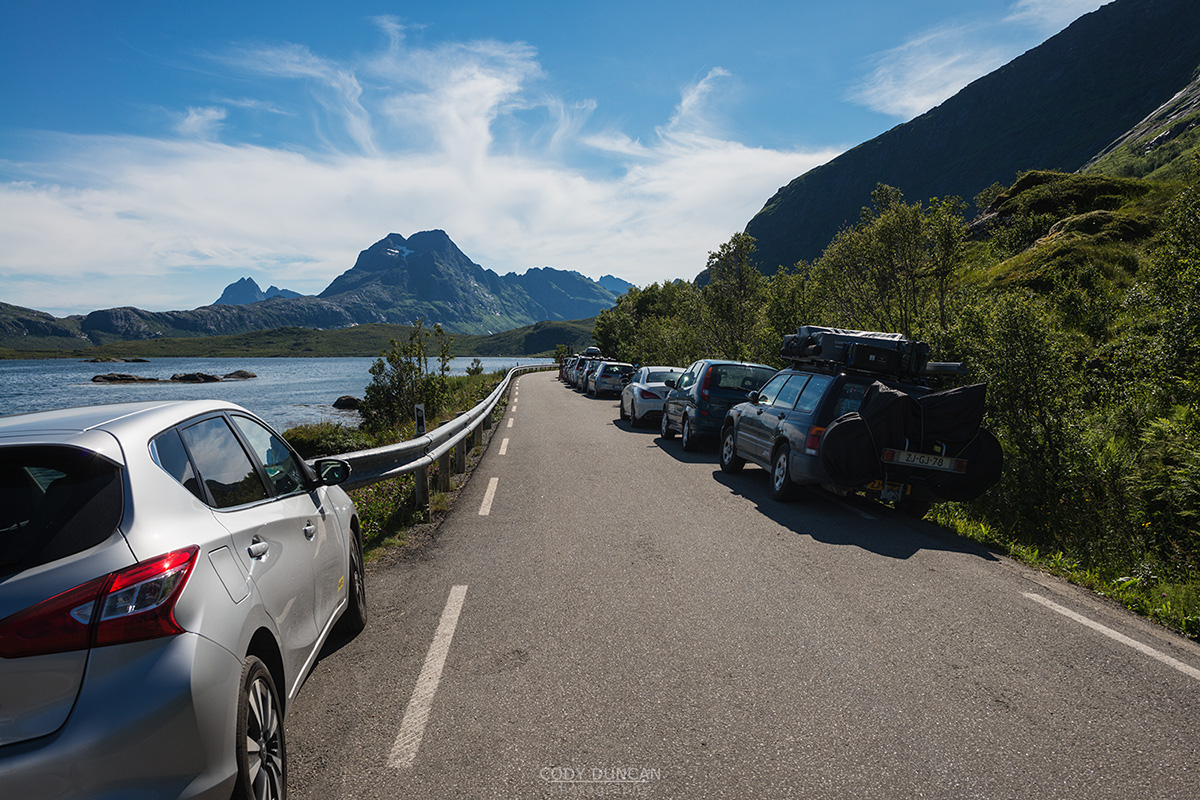 I have a lot of nice images from the last weeks to post. However, today I’m going to make a brief mention of the busy tourist season Lofoten is having this summer.

The pages of the local newspaper, Lofotposten, have been full of stories about badly behaving tourists over the last weeks. From people camping in cemeteries, literally peeing and pooping everywhere, and out of control parking situations at some of the more popular locations, such as Kvalvika beach in this photo. While summer on Lofoten has always been busy, things seem to have reached a critical mass this summer, and now changes are occurring – often meaning new fees for parking and the police out writing tickets, as they have started to do at Kvalvika in recent weeks.

A particularly acute example is Reinebringen. A while back I wrote a note about it being too busy and maybe looking for other hiking options. Nobody listened to me and the mountain quite literally fell apart to the point that a massive trail reconstruction is taking place now. The trail is effectively closed and the local council asks people not to hike the mountain at the moment while helicopters are flying around and hauling equipment. But again, nobody listens and I could see dozens of people on the mountain Thursday evening as I was alone with just a couple friends on a nearby peak (with better views). But in defense of the people on the mountain, there is little information provided, and even less in English or other languages, that the work is going on! So if the council only shares info in Norwegian, they are missing 90% of their target, something which seems to be an issue on Lofoten in more cases than just this.

And while the islands seem more popular than ever (Matt Damon even has been here filming the last week – they complain about tourists on one page, and celebrate Hollywood celebrities being here on the next. Go figure.), I sense that the local community has suddenly woken from a coma and realized that there are people here, and are now shocked, which is resulting in poorly thought out ideas to compensate: such as 150 NOK (50 NOK 8:00-15:00, 100 NOK 15:00-8:00) daily parking fee for parking in a parking lot outside of central Reine. No offense to the mayor of Moskenes, but when I saw the parking lot had been built outside of the village, and which was free for parking until the fees came into effect in mid July, I thought it was a good idea. Free parking just a minute walk away from the center of Reine will keep the tourists from parking everywhere in the village. But no, now that they are charging for parking, more people than ever are going to park on the lawn in front of the Bringen cafe and elsewhere in the village to avoid the fees. The opposite of the intended effect. And let’s face it, Reine is full of Air BnB rentals and the nearest police station is in Leknes. So it’s not like any of the local residents can recognize whose car belongs where nor will the police be around very often to look for illegal parking. But park in the fee lot now, and you can be sure someone will be around to enforce that.

The friends I was sitting on the mountain with Thursday night shared a story from the other week about some campers asking if they could camp on the lawn outside their house. When this was declined, as it was basically a few meters from their kitchen window, the would-be campers protests, saying that since they asked, then it was allowed! That is not how the allemansretten works, and it took my friend some period of discussion to make this clear.

So to come to something of a conclusion of this post, there needs to be a two way street of understanding between both the locals and the tourists. Again, Lofoten has always been a popular destination in summer, so for the local councils to act like this in an unexpected surprise and come up with short sighted plans is not an ideal solution. There are many creative and productive ways for the Islands to provide solutions to the tourism demands here – mainly parking, toilets and trash.

Yet on the other hand, it is up to the tourists to behave responsibly as well. Just because you can do such and such at home doesn’t mean you can come up to arctic Norway and do the same. If your impact is more than footprints or matted grass where you set up your tent, then it is too much. If I can see your pile of shit and toilet paper next to a rock, then you are not acting responsibly. And don’t complain that someone says you can’t camp on their lawn or in the cemetery! Be respectful and a balance can be found. Act like idiots, and you will be the cause of new rules and regulations, thus resulting in less enjoyment of this arctic paradise for those in the future.