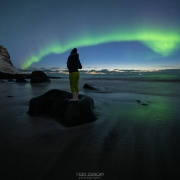 April brings the transition between night and day to Lofoten. As the month begins, the sky is still dark enough for aurora to dance across the sky, but as the weeks pass we finally tip the balance and the night is gone.

This past season has been good and bad. There have been some absolutely fantastic shows of northern lights, perhaps some of the best I have ever seen. Yet at other times, particularly during the autumn and into early January, the weather was not very cooperative, and there could be a week or more between aurora displays. At least for all of my week long photo workshops of the season, every tour got at least one nigh of aurora, with a few trips getting much more, despite the best efforts of the weather.

For myself, I never managed any mountain trips during the autumn. And with the nights quickly shortening, I might not have much time for any winter camping shots either. But I will do my best.

And as much as I’d like the aurora to continue, I’m already thinking about the season of light that is quickly approaching. It seems only a few weeks ago that after-work outdoor activities were impossible, as the darkness arrived all too early. Monday, I was able to go to Norwegian class in the morning, head home for lunch, go for a quick ski tour, meet my friends in a cafe, and then head of for an early evening surf session. And I was still home before sunset! So wonderful! And hopefully the landscape keeps its winter look, though its been a bit on the rainy side, unfortunately. But I look forward to being in the mountains as much as possible these next weeks!

I’ll see the aurora again in August – probably from over in Greenland.