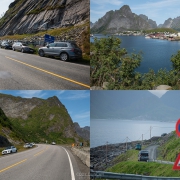 The new stairs on Reinebringen have become more popular than expected since opening again in mid July and have been causing quite a bit of traffic chaos in the Reine area. A few days after I went up on the evening of July 15th, passing around 60-70 people in total, it was reported that nearly 1000 people ascended the mountain on a single day, and has likely continued at a similar pace in the weeks since.

This led to parking chaos with cars parked all along the road next to what had become an unofficial parking area on the west side of the tunnel. In response, Statens Vegvesen closed off this parking area. But instead of fixing the situation, it has now led to people parking along the road on the Reine side of the tunnel, as all the other parking areas quickly overflow – and people are unwilling to use the paid parking at the outer harbor in Reine. I went yesterday to check things out and there were about 20 cars parked along the road, though I had heard there was 40 the previous day.

So of course, new sings will now have to be paid for and installed by the already severely indebted Moskenes Kommune to keep people from parking in places they already should not be parking at – as has already had to be done at the Kvalvika beach parking area, and Haukland beach, and other places that have lost control of tourism.

And I can sense the frustration amongst my friends living in the area. It seems that a large enough portion of tourists these days are acting in quite a selfish and reckless manner, only taking from Lofoten for themselves and leaving a negative experience of their actions.

And for me, it is almost becoming a full time job to keep up with the changes. And so I ask: If you would not park in such a way at home, don’t do so as a tourist on Lofoten. You are overwhelming the 1,100 residents of Moskenesøy. So please behave as friendly guests, not an invading barbarian horde pillaging the islands for your entertainment.

And despite the nearly completed stairway the daytime crowds on Reinebringen have already showed their danger this week. On Tuesday afternoon a man was severely injured and had to be rescued by helicopter and flown first to Bodø and then Tromsø after being struck in the head by a loose rock, most likely dislodged by a hiker above.

With such crowds on the mountain, many of which are likely inexperienced hikers, I will not go there during the daytime. It is far too dangerous to be 50-100 meters directly below people descending the loose rocks of the unfinished upper trail. If you must hike Reinebringen, then I suggest at least to go during the evening, when there is less traffic. And after the extended dry period that Lofoten has had these past weeks, when the next rains come, the rocks will be flying down the mountain…

Friday Photo #345 – Mountains Of The West
Scroll to top