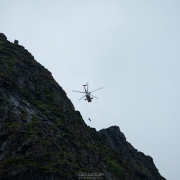 I was sitting in my cabin at Sakrisøy when I heard the sounds of the helicopter, not something too common on Lofoten. Hmm, hope it’s not the Sea King – it was. As I looked outside, I could see the helicopter hovering over the ridge of Reinebringen in the grey misty sky. It had been a day of heavy rain and not really a day for hiking – especially on Reinebringen. And so a hiker had to be rescued after breaking a foot. I imagine the over eroded ridge had turned into quite a slippery mess of mud after all the rain. A slip could have been easy.

The Sherpa steps on Reinebringen, built to improve the safety of the previously heavily eroded trail due to overuse, have actually had the opposite effect, and turned Reinebringen into a place of regular helicopter rescues – 3 in August 2019 alone, and 4 since work was completed in mid July.

Part of this is just a numbers game, with 700-800 hiking the mountain each day. And part is probably because the steps give an illusion of safety, and so people who would not normally find themselves in mountains now suddenly are. This creates dangerous situations.

On August 23rd, two days after this photo, another rescue took place on Reinebringen. This time is was due to rockfall hitting a woman in the head – the 2nd incidence of this in August – and the reason why Reinebringen is now more dangerous than ever – too many people are on the mountain. More people = more falling rocks…