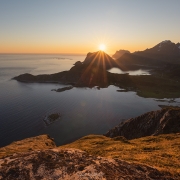 Last Saturday night I hiked up Offersøykammen to watch shoot the sun on the summer solstice (which was Sunday). Hot and cloudless – like it had been for most of a week already – the endless blue skies were getting a little boring photographically. But I wanted to photograph the sun at its lowest point in the sky, which occurs just after 01:00.

Beyond just shooting a single photo, this image is actually taken out of a time-lapse sequence which I shot from about 22:30 – 03:00. If you follow me on Instagram (@Distant.North), you would have seen I posted that video already. I was using too cameras: one at 24mm and this one at 14mm. If I’me going to sit up on the mountain all night, I might as well be 2x as productive.

The night was quite warm and there was a surprising amount of mosquitos, something which generally aren’t a problem in west Lofoten – this was probably the worst I’ve experienced them, my legs and ankles are still itching!

It was a little difficult to choose the correct location, knowing that I would likely want to pull a still frame (this photo) out of the time-lapse sequence, where both products might have wildly different crops: 2:3 for this and maybe 16:9 or maybe 2.35:1 if I want something more cinematic looking. I also wanted to be relatively sure that the sun wouldn’t sink below any of the background mountains for too long – in this case it only disappeared behind Himmeltindan for a couple minutes when it was well on its way to rising again.

There were a couple mountains I had in mind, but Offersøykammen seemed the easiest and safest – though perhaps not the most spectacular. But it was hot and I was kinda lazy, so… Perhaps if there had been a bit more of a dynamic sky, I would have tried something better. But really, I can’t be too motivated for hiking hours in the heat for a cloudless blue sky.