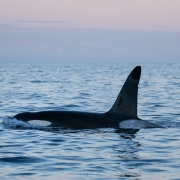 Over the years I’ve noticed a pattern on Lofoten: Nothing happens, and then everything happens. It can be with events, where there’s nothing going on for weeks and weeks, then suddenly 3-4 things to choose from on a single weekend, before going back to weeks and weeks of nothing again. Last night as I was hiking the final few meters to the summit of Flakstadtind with nice golden light shining over the landscape my phone rang. A friend called to say the orcas had been spotted and they were going out with their boat. I wouldn’t be writing this if it was only the first time it has happened – I’ve missed some good orca sightings while up on a mountain somewhere.

This time though, I decided the orca were more important. And luckily, I was just down the road from where they were anyhow, off the coast of Nesland. So after a few photos of the nice light and clouds, I headed down the mountain as quickly and safely as possible – it’s steep and loose up there!

Getting back to my van I headed to the coast, where my friends were watching them from the boat. I shot from shore for a bit, they were almost just on the rocks, feeding on a large school of hearing. But once they headed out to sea a bit, I found an impromptu harbor and got on the boat. While I’ve see the orca multiple times on Lofoten, and photographed them from boats up on Vesterålen, I’ve never had the chance to be on a boat here in Lofoten.

When I left my house at 21:00, kinda bored and just going hiking because I had nothing better to do, I never thought I’d have nice mountain light and orca from the water on the same evening!