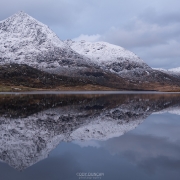 After last week’s brief cold spell, the mild and wet weather of this November has continued, with daily rain and overcast skies. With the sun disappearing below the horizon in 10 days, I’ve probably already seen my last sunlight of the year – unless I happen to get lucky and randomly be in the right place at the right time for a sudden hole in the clouds. I think by the time this month is over, the temperature will end up being 3-4 degrees above average for November.

Now of course this is Lofoten, and who knows what will happen over the next months and into winter. Last year November had the coldest day of the entire winter, which then turned into a rainy and warm January, and overall mild temperatures into the spring. While I wish for snow photographically, daily life is much easier without having to deal with constantly icy roads – there will be plenty of time for that later.

In the middle of the week, the wind dropped off sufficiently for some nice reflections of many of the lakes of Vestvågøy, as they are somewhat sheltered from the surrounding mountains. I was actually heading out to Unstad on Tuesday to shoot something when I passed the perfectly calm Farstadvatn. Normally I don’t stop here, but this day I think I had to, so I pulled over on one of the pullouts and walked down to the shoreline. I actually like that the lower ground is snow-free, adding a bit of separation from the mountains.