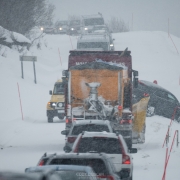 Photo: Snowy traffic jam as rental car is pulled from ditch after sliding off the road near Vareid, Flakstadøy, Lofoten Islands, Norway. March 29, 2022. 15:47

After an unusually warm and mild first half of March which saw Lofoten looking more like spring than winter, the snow finally returned in a series of passing storms. Along with the snow, an unusually high amount of road chaos also occurred, mainly in the form of cars in ditches and semi-trucks stuck on inclines. It must be the combination of sun shining on the snowy roads, as even to me, they seemed to be slipperier than normal winter roads.

Tuesday afternoon, on my way to Reine for a conference I didn’t get far from Leknes before I encountered the first car off the road. The weather was pretty terrible, and I even though of turning around myself, but there was a large amount of traffic on the roads, about 1/2 of which being rental cars. It wasn’t fun driving conditions, even for a local, so I don’t understand why so many people were out…

A short while later, I passed another car in the ditch just after the Fredvang bridges. Just before departing the conference in the evening, I saw that the E10 at Nappskaret was closed, as 3 semi-trucks had gotten stuck. And finally just before getting home there was a van sitting deep in the ditch at Kilan – where 2 semi-trucks found themselves partially off the road on Thursday, closing the E10 for several hours. Busy days for the tow truck drivers…