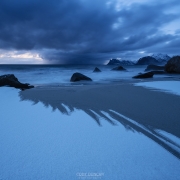 Winter has returned to Lofoten! After a period of mild weather that saw most of the low level and a fair amount of high level snow melted away with the promise of an early spring, a cold north wind has brought snow showers across the Islands in the last days April.

By last weekend, I had finally managed to clear the last of the winter snow drifts out of my yard and even some of the trees were beginning to bud. And I spent the evenings on two separate hikes in mild weather, though Sunday was a bit on the rainy side, on snow free trails. However, the weather has now shifted and winter has returned. Lofoten’s landscape is once again while from sea to summit.

Last night I wandered down to the beach a little before midnight. The sun is only about 7˚ below the horizon at the moment, so as the clouds clear, the night is brighter and brighter with each passing week. I’m not sure where I put my headlamp last, but I won’t need it again until late August.

There has been enough snow that even some of the beaches are covered in white, which isn’t even a regular occurrence in winter these days anymore. I wasn’t looking to shoot much, more to just record the conditions for future memory. The tide was incoming and one large wave swept across the beach – ruining the snow in the composition I was shooing, but forming this interesting pattern across the now revealed sand. I actually found the clouds somewhat distracting, and competing against the rocks and other elements of the foreground, and the sky was clearer overhead, but in an awkward position for where I should put the horizon. I would have liked to have the melt pattern a bit more centered, but it ended in a rock that didn’t work for the composition, so this diagonal was kinda the best I could do, though it leaves quite a bit of blank space on the left side of the image. I suppose I could always crop in tighter…