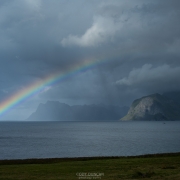 Like last year, this year has also been a cool and wet July and beginning of August on Lofoten, with July receiving almost 2x the normal amount of rainfall. Though this isn’t too bad, considering areas along the Helgeland coast have had the wettest summer since 1900! I’ve been attempting to make a few trips over to Helgeland throughout the summer, but the long term forecasts simply show near endless rain most of the time.

The wet weather has also led to a significant number of mountain rescues so far this summer, including the death of a young hiker on Reinebringen in June (the second death on Reinebringen in a 6 month period, the previous being in December 2021). The trails of Lofoten, especially the popular ones which are over-eroded and generally unmaintained are in pretty terrible condition due to all the mud. Even whin the sun briefly shines, I’ve mostly been sticking to quiet, untraveled areas that are mostly off-trail, as its far safer than muddy, slippery trails where it is easy to have a quick slip and end up with a sprained ankle or worse.

Fortunately, with the rain comes rainbows. This day last week was full of them and I was quite distracted from work while always looking out the window. It would have been a nice day for mountains views and a good soaking, but a strong south wind was blowing across the islands, so better to keep to low ground. Luckily, my office window still has a decent enough view!