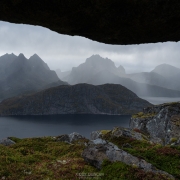 As the calendar pages turn to September Lofoten enters the historically rainy and wet autumn period. September usually averages to just over double the total rainfall as August, and October brings even a bit more rain than that. Of course, these are just historical trends and some years are better than others if lucky, while others can be much worse!

For example, in 2021 September and July had roughly the same amount of rainfall. This wasn’t because it was a dry September, no, it was about average. It was because it was a terrible July, with roughly triple the rainfall than average. So, as far as last year was concerned, there was little difference between July and September’s weather. What this year will bring is anyone’s guess.

On this afternoon, I hiked up to the small mountain Tekoppstetten above lake Solbjørnvatnet in hopes of some nice shows of light in the passing rain. No light of too much interest arrived, just heavy rain and heavy clouds covering the landscape. Luckily, there’s a small cave to hide in to keep dry as I waited. But eventually, with the radar looking worse and worse I headed back down the muddy mountain path.