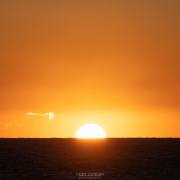 After a stormy holiday season with lots of wind and rain, the weather has finally cleared just in time for the return of the sun to Lofoten! Wednesday I headed towards Reine to try and catch a glimpse and there she was, shining over the southern horizon of the Vestfjord.

This winter season has been the shortest polar night since I moved to Lofoten in early 2016. My last sun sighting was December 11th (Friday Photo #519) from the summit of Reinebringen – which you should no longer hike this winter season, and there was a helicopter rescue there yesterday of stranded hikers. And the return of the sun on Wednesday, January 4. So 23 days between sightings of the sun. Not too bad, as I’ve periods of up to two months some years.

With the sun now having crossed the horizon, the days will begin to feel much lighter. Though the rising of the sun is still somewhat slow, roughly 0.1˚ per day. It will be another week, January 13th, before the sun is fully 1˚ above the horizon at its highest when viewed from Reine. So this is the time of year when Lofoten’s snow covered mountains glow red and pink throughout the day in one continuous motion from sunrise to sunset.

There has also been a wonderful full-ish moon filling the twilight sky over Lofoten the last days, of which I have much better images than a boring closeup of the sun – which could have been taken anywhere, at anytime of day, really. But I was happy to see the sun again, so pictures of the moon can wait, as they are not as time sensitive. So perhaps next week’s post will be a nice picture of the moon over some mountains. If nothing else more interesting occurs between now and then…

Commercial Driving Regulations of Photography Workshops and Other Tours in the...