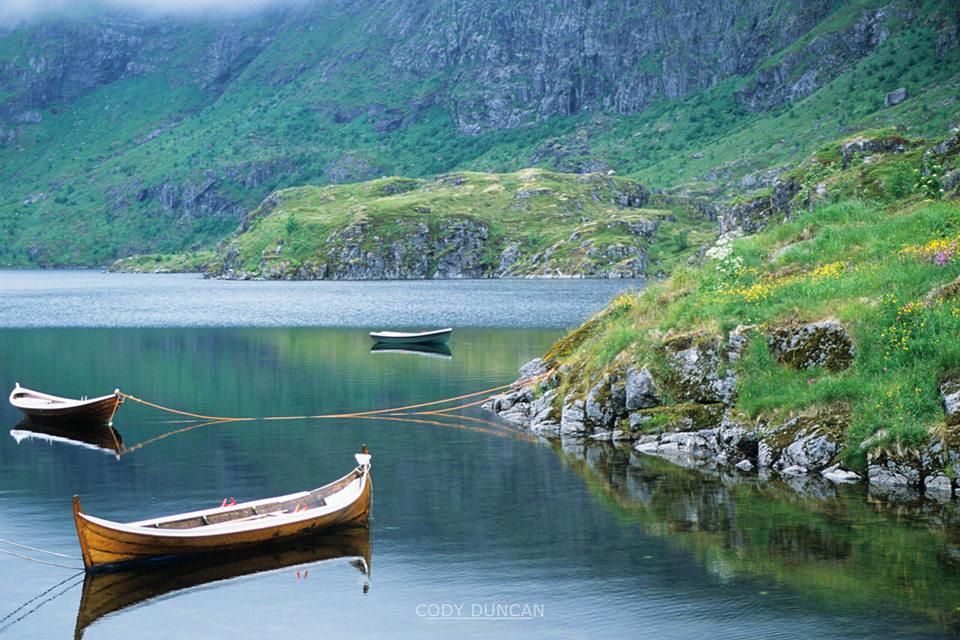 This is the oldest Lofoten photo I’ll ever post on this site. But this photo is perhaps the whole reason this website exists. It was the summer of 2001 and a 20 year old long haired version of me was on his first ever backpacking trip to Europe. Or more specifically, 10 weeks of summer in Scandinavia. Becoming a photographer was not anywhere on my mind, infact, I would be moving to Santa Cruz to study computer science (ha! That didn’t last too long…) shortly after my return. But I still carried my trusty old Nikon FE (my first ever slr camera) and a couple dozen rolls of film to document my summer in Scandinavia.

I’ve written elsewhere about my discovery of Lofoten while in Bodø, because I had merely wanted to go north of the Arctic circle somewhere. The following morning I was on the ferry to Moskenes. Not having any idea of where to go, I teamed up with the only other Americans making the journey and followed them to Å. Sometime shortly before midnight I was wandering back from a walk and took this photo.

It is not technically perfect. In fact I’d dare say its pretty damn bad. I should have given a little more room in the foreground, and no doubt a tripod and a little hyperfocal-distance also would have helped, but the overall balance of the image is still appealing to me Or perhaps my memories from back then still hold power over something that would never see the light of day today.

Anyhow, I made a print of this when I returned home. It hung on my wall in the various places I lived for the following 5 years until I was finally able to return to Lofoten again. Since that second visit, the Summer of 2006, I’ve been to the islands every year except 2008, when I was doing my best to live in Germany.

Over these last years I’ve returned here again and again to try and make a ‘better’ version of this photo. I’ve never succeeded. Either the boats were missing, or half sunk, or it was raining, or too windy, or Frozen, or… And so this image remains an inspiration to my future and my love of the islands.

Perhaps when I once again have a place to live, I’ll pull the dusty print out of storage and give it a deserved place on my wall.