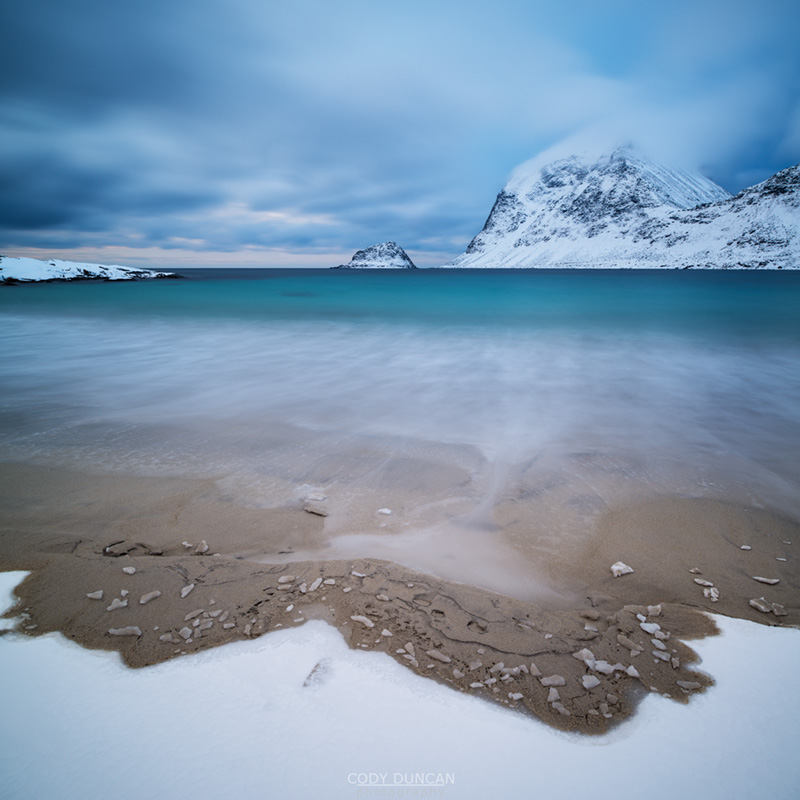 For several days a layer of low clouds had enveloped the islands and concealed the sun.  Flat, gray light was all there was to be found over most of Lofoten.  Finally, as evening arrived I headed out towards Utakleiv, where I planned to spend the night.  I was originally going to stop at Haukland beach while on my way, but there was already a crowd of other photographers there – and for some reason, I’m a bit self-conscious about invading another photographers ‘working space.’  Nothing more annoying than composing a shot and have some dude, or usually a workshop group, as numbers bring boldness, set up a tripod in the middle of your scene.  But I digress, a rant for another day perhaps…

So I instead headed towards Vik beach, which sat empty.  I had good luck with my timing as the incoming tide was meeting the snow line on the beach, which I often find an interesting motif.  The clouds here on the north side of the island also began to show some texture as they first met with the mountain wall of Lofoten.

There seem to have been a sheep or two which had wandered up and down the beach, leaving a maze of footprints in the otherwise almost completely untouched snow.  This reduced the possibilities of including more foreground in the composition and meant I needed to keep just to the water’s edge.  But in the end, I think it worked out quite okay.