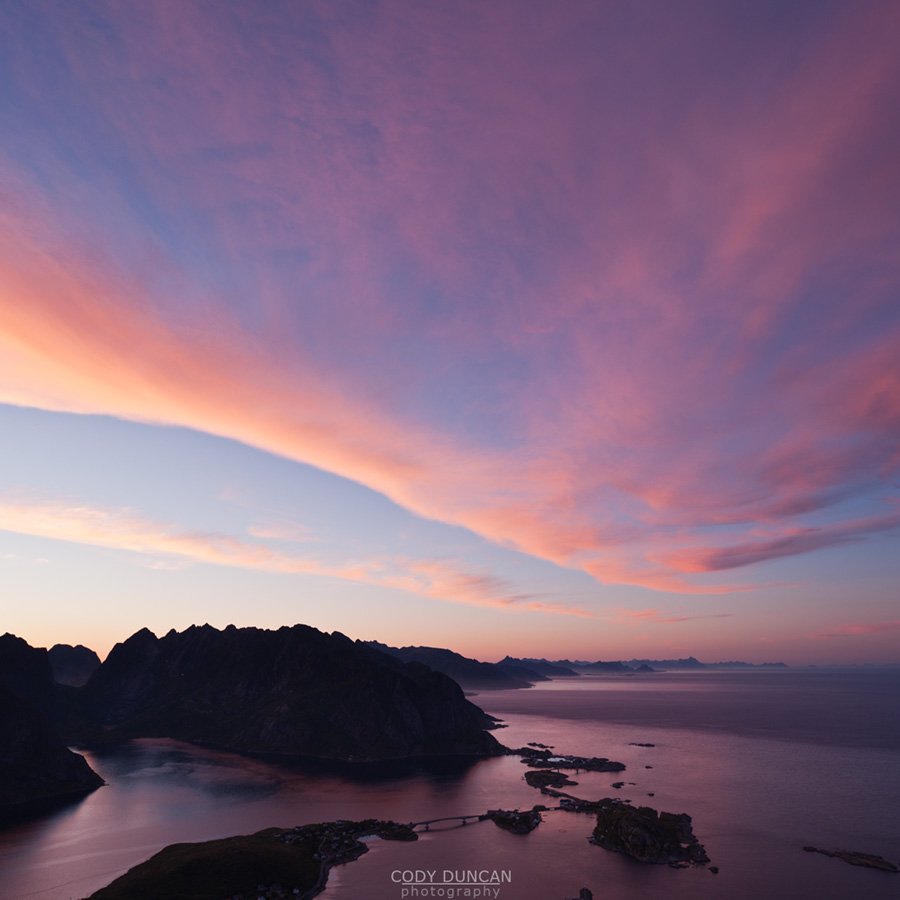 The sky was a perfect blue as my friend Søren and I arrived back in Reine after two nights camping at Bunes beach.  The original plan was to head back to Stamsund, but such a day was too good to spend sitting on buses and waiting around Leknes.  Not having planned ahead for such a situation when leaving Bunes, my water bottles were empty and so I resorted to purchasing 1 liter of overpriced water from the small store in Reine.  And at that, we were on our way towards Reinebringen.

Despite our heavy overnight packs we made good time up the mountain, with a few odd comments and looks of surprise from the people we managed to pass.  We were on the summit before noon, with hardly a cloud in the sky and barely a wisp of wind to be felt.  Absolute perfection!  After some time of sitting in the sun, I set up my tent for the sole purpose have having some shade.  And by mid afternoon I was down to about 200ml of water.  But we were determined to stay on the mountain and so the hours slowly passed by as the sun sunk lower and lower on the horizon.

Not trusting if the weather would last, I took the tent down around 11pm, deciding that it would be safer just to sleep in the open; allowing a faster escape if the weather turned.  By midnight I was in my sleeping back, trying to get a few hours sleep before our 5am wake up call.  Though some 20 minutes later I opened my eyes to this scene emerging. Shit!  Time to get up…

I didn’t even bother getting dressed or putting shoes on.  So there I stood, barefooted and only in my underwear on the summit of Reinebringen as I photographed a midnight sunset.  It probably would have been a pretty funny looking scene had someone else decided to show up then.  By 5am we were on the way back down the mountain for the 6am bus back to Stamsund, where I slept the rest of the morning away on the deck outside.