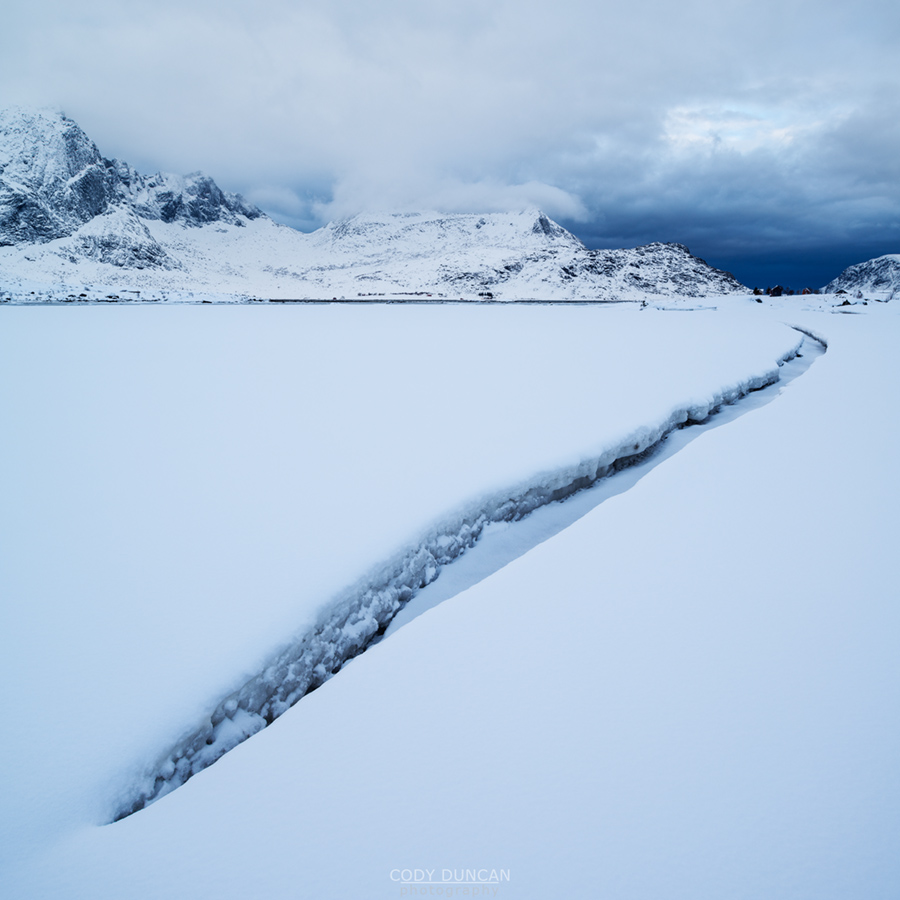 As the second half of February arrived this year, the previous weeks of cold, but clear and calm weather came to an abrupt end.  Heavy clouds rolled across the islands and the beautiful light of the low winter sun was taken over by a flat, dull gray.  At least there was still a decent coat of snow that had yet to be too covered in footprints.

I often arrive to the islands in less than ideal conditions, often missing some brilliant light by a day or two.  But I always feel a need to get those first few photos.  I have been to the islands enough now to know that I need to be patient, but as days 1, 2, 3 pass by and I’ve hardly touched my camera, I sense a growing frustration within myself to get out and shoot something.  Oftentimes this can be a fruitless quest, but every once in a while, something interesting will appear despite all efforts of the light working against me.

This image only existed for a few day.  Thanks to a fresh coating of snow that had fallen overnight, ‘cleaning’ up the sea ice, which by itself, was not especially photogenic.  Luckily, despite the crowd of photographers on the islands this February, I was the first to come across this scene, finding it still untouched; though most groups only hang around Reine anyways, going for the ‘hero’ shots made popular by several photographers better known than myself.  But that is good, as I often find that I have the rest of the islands to myself.  Free of footprints in the snow, and to wander as I please.   Perhaps I shouldn’t give away too many secrets though…

Without the crack in the ice, this scene would not have worked at all as it would have been too flat and boring.  And I think in situations like this, one needs to resist the urge to punch up the contrast to some hyper-realism that didn’t exist.  The light was shit, as it often is on Lofoten in winter.  But using shape and form, there is still the possibility to find something interesting.

This is a scene where the 24mm tilt-shift lens is really is a valuable lens for Lofoten, often due the the sheer vertical relief of 800-1000m mountains rising directly from the sea.  Much winder than 24mm, and there are distracting elements on the edges of the frame.  But with a normal 2/3 crop, the tops of the mountains would be lost, unless getting low enough to the snow where the crack would then lose separation and definition.  I guess one could always crop from a wider lens, but I don’t really like to do that.