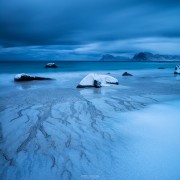 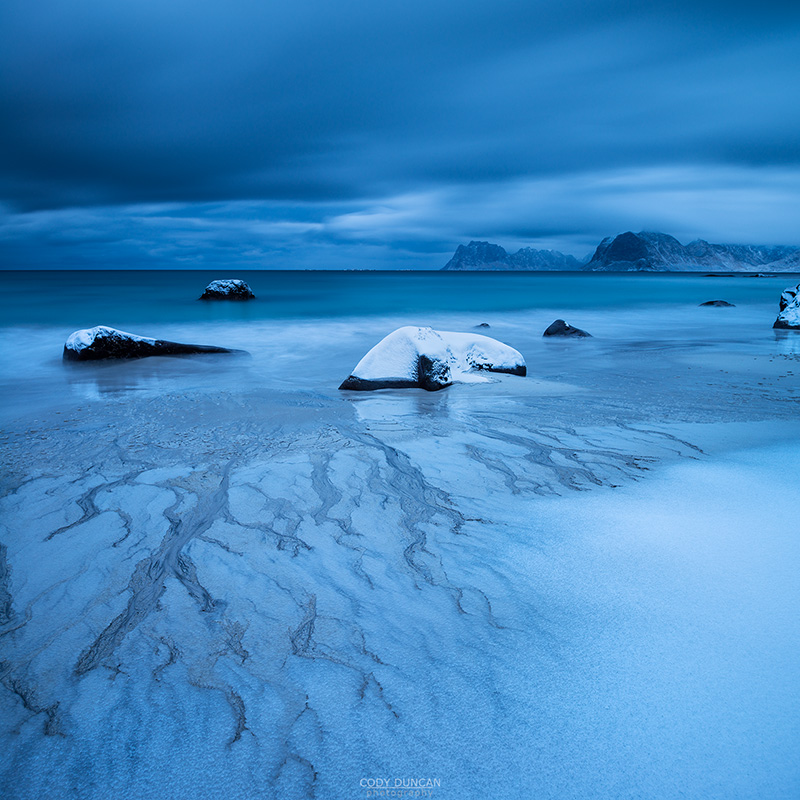 I still hadn’t quite gotten my timings quite right, but I was expecting to see a glow beginning to appear on the horizon as I lifted my head from the sleeping bag.  Instead, my first morning on Lofoten arrived in the swirling darkness of snow.  Snow!  I knew the islands were having a lean year thus far, so it was an unexpected, and un-forcasted, surprise after arriving on the islands the previous afternoon.  I did not know it at the time, but in 6 weeks on Lofoten this year (2014), this would be one of the rare times I saw snow fall.

I left Utakleiv, where I had spent the night sleeping in my rental car and drove into the morning darkness.  I was not sure how big of a storm I was in, but by the direction of the wind, I figured Myrland or Storsandnes beaches would be the best locations to shoot away from the wind if the storm continued past sunrise.  Pulling up at Storsandnes I could see nothing but black beyond the glow of my headlights.  Time for breakfast I guess.

After an hour the snow began to lighten and I could begin to see something of a horizon, dark and grey, emerging from the distance.  I headed to Myrland and negotiated the icy trail down to the beach just as the last snowflakes were beginning to clear.

The beach was covered in a delicate layer of snow, barely cold enough to keep from melting.  An incoming tide of gentle waves was washing against the snow line as the world grew brighter while snow covered rocks formed white islands in the blue sea.

I feel there is alway a delicate balance for snow covered beaches:  you want an incoming tide at dawn after an overnight coating of snow.  If the tide had been high when the snow fell, then it leaves too much of a transition between the snow line and the water line.  This morning I was lucky, and found a near perfect balance of conditions.