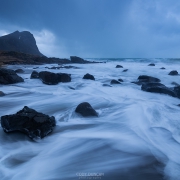 I was hoping to post a photo of my first sighting of the sun today, but I have not seen it yet, even a week now after the end of the polar night. On Wednesday I went for a hike up Offersøykammen as it was the only slightly decent weather forecast for some time, but the clouds remained too thick.

For the last two days Lofoten has been getting blasted by a proper winter storm. More of less everything on Lofoten is shut down today. All ferries are canceled, flights are canceled, busses are canceled, vehicles have been blown off the road, power is out in some locations, and some buildings are having to roofs blown off. This is serious weather, not outside weather. And not a day to go touring around if you are unfamiliar with the conditions. Don’t put yourself or others at risk

The Gimsøy bridge recorded wind speeds over 50 m/s – That is 180 kph! More than a hurricane! The Swedes and the Germans have given the storm a name, Jan and Donald, respectively. Apparently its not big enough for the Norwegians to name. Is that a polite way to call our Swedish neighbours wusses?

I only managed to walk down to my local beach between rain showers. Even at low tide, the waves were crashing almost to the back of the beach. I ended up quite deep in the sea at one point before I found a large enough rock to stand on. So while the photo might just look like a somewhat average day here on Lofoten, it really was crazy!

Most of the rocks in the image are normally completely covered in sand and not visible. So it looks like a meter or more of sand has been washed away from the beach. It will be a completely different place the next time I shoot it. Luckily the sand will eventually return, but it might take some time.