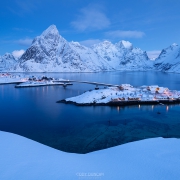 Sometimes there is nothing nicer the fresh snow on a cold winter morning. I don’t know how many times I’ve stood on this hill over the years, but a lot, and still, on mornings like this it’s worthing setting up the tripod for a few photos. In the early blue hour, sometimes it looks as if the mountains are glowing from within.

I actually found myself shooting quite a lot this winter workshop season. Perhaps it was because Lofoten had so much snow for a while, something which has largely been missing in recent years, or perhaps because there was also some quite interesting light and weather in familiar places that I’ve almost grown bored of seeing. Either way, I’ll have a lot of photos to edit during the next months.

For now thought, my photo tour season is over for this winter – though lofoten is still quite busy, there’s even a group walking around outside my house as I type. So my focus will mostly turn to the mountains for the next month until winter finally begins to thaw itself out in the short nights of April. And only 1 more month for aurora’s, so still need to keep an eye on the night sky, though I must say, I’ve been a bit spoiled this season, so it needs to be something big to draw me out of the house…